How did it get to Sunday again? With our weekend quickly vanishing we decided to make the most of our day with a tasty meal and an outdoor excursion. After a hearty brunch and stuffing ourselves on pancakes we needed somewhere to walk off our feast and so we headed to Loch Lomond and to somewhere we ourselves had never heard of…The Cashel Native Forest.

Not really knowing where you’re going is always part of the fun so while we were aware the Cashel Native Forest was near Balmaha, Loch Lomond, it was not somewhere we were familiar with so sounded like a good place to go and explore.

The journey was not too far and the weather was fairly warm if rather overcast when we arrived at the car park for the forest. The site has a nice little info centre but we decided just to venture out on a walk since it was getting a little late in the day. We were presented with three options on the Cashel Native Forest route map and we choose the medium length and difficulty option which was around a 2 hour round trip. Nothing too strenuous for a Sunday afternoon after a heavy brunch.

The route boasts a couple of unique features and two of them are near the start of the trail and, as an environmentalist, something I probably got a bit more excited about than others would. The first being a fantastic bug hotel created by, I assume, staff or volunteers working within the park and the second a micro hydro system generating power from the water flow.

But don’t worry if these don’t really float your boat, the views from our walk were also spectacular. While large sections of the walk are as the location suggests wooded areas once the path starts to climb the views out over Loch Lomond are pretty beautiful.

If going the Cashel Native Forest red route we would definitely recommend following the route to the viewpoint. While I’m sure some people stick to the main path either for fear of getting lost or because they’re short of time, the detour to the viewpoint on this path is definitely worth it and give a beautiful view over the many little islands of Loch Lomond. Even on such a cloudy day as ours is was a gorgeous sight.

Our route down isn’t too bad though back into the trees and a little slippy in places. We were, however, very impressed but the fact that we passed an elderly couple who must have been their 80s at least heading up the way. We only hope we’ll still be as active when we reach that age!

Where have you explored around Loch Lomond? 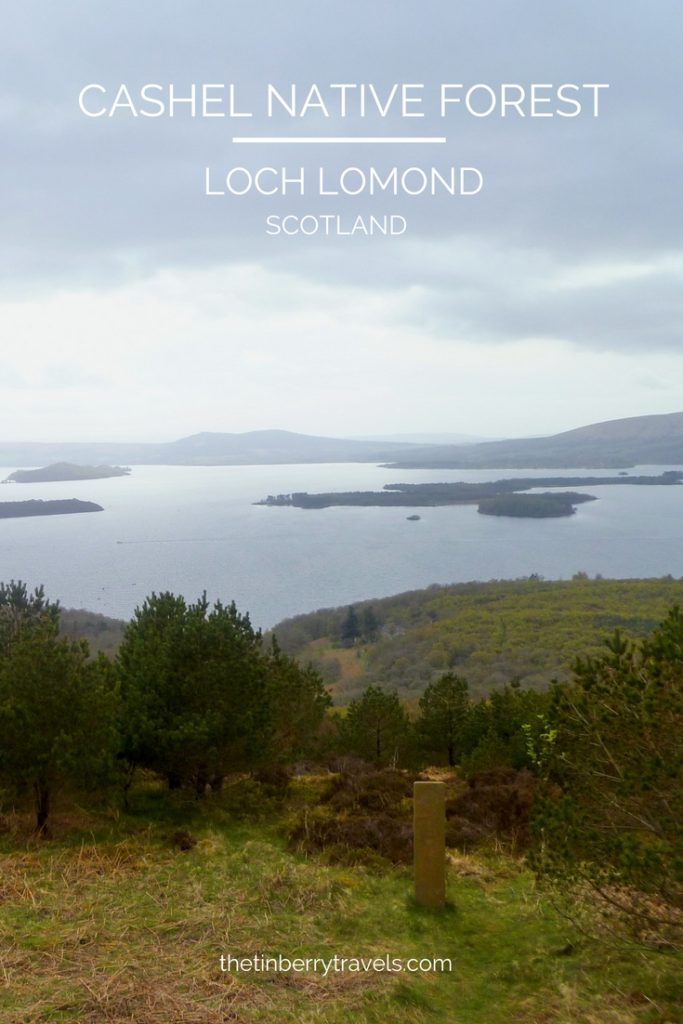