Illness during travels is never a fun experience, stomach troubles is worse and having stomach troubles while camping is horrendous. I managed to pick the worse time to be ill during my USA trip but despite feeling truly rotten I was going to explore the Grand Canyon National Park. I might not have been able to go a full day hike but I was not missing the Grand Canyon.
While others in my camping party had left early in the morning,  having gotten very little sleep, I didn’t head out until around 10 am which is very unlike me when I have limited time in an awesome location. I was pretty much off food but I was drinking lots of water, taking plenty of re-hydration medicine and lots of lovely tablets to stop me being so ill. It seemed to be somewhat working, or at least enough to let me get out and explore a little.

Even though I think it kind of takes away from the idea of vast wilderness of the Grand Canyon I was very thankful that there is actually a bus system that goes round large sections of the National Park South Rim area. This is really what saved my trip here. There was no way I was capable of walking far so I fully utilised the bus routes to see as many view points as possible and to spend as long as possible soaking up the epic Canyon views.

My first stop I chose to head back to Mather Point, where we had watched the sun set over the Grand Canyon the evening before. The sheer size of the Grand Canyon is just immense and so difficult to fully appreciate until you are actually there looking out over such a vast landscape.  As well as the beauty of nature I also make friends with the local wildlife.

I managed to make it to a few different spots and try to see a variety of views, even going some hiking off the track to get away from the crowds that seemed to only hang around the bus stops and not explore any further. The buses definitely open up the experience to those who normally couldn’t see the Canyon and there is plenty of easy walking paths around the viewpoints but it is sad that so many people get off the shuttle buses, walk to the viewpoint, snap a photo and then return to await the next bus out. Did you really appreciate the natural beauty there? Did you enjoy your view? If I could make an effort to explore in my state I feel others could have at least tried to look interested rather than just ticking the Grand Canyon off the to do list. 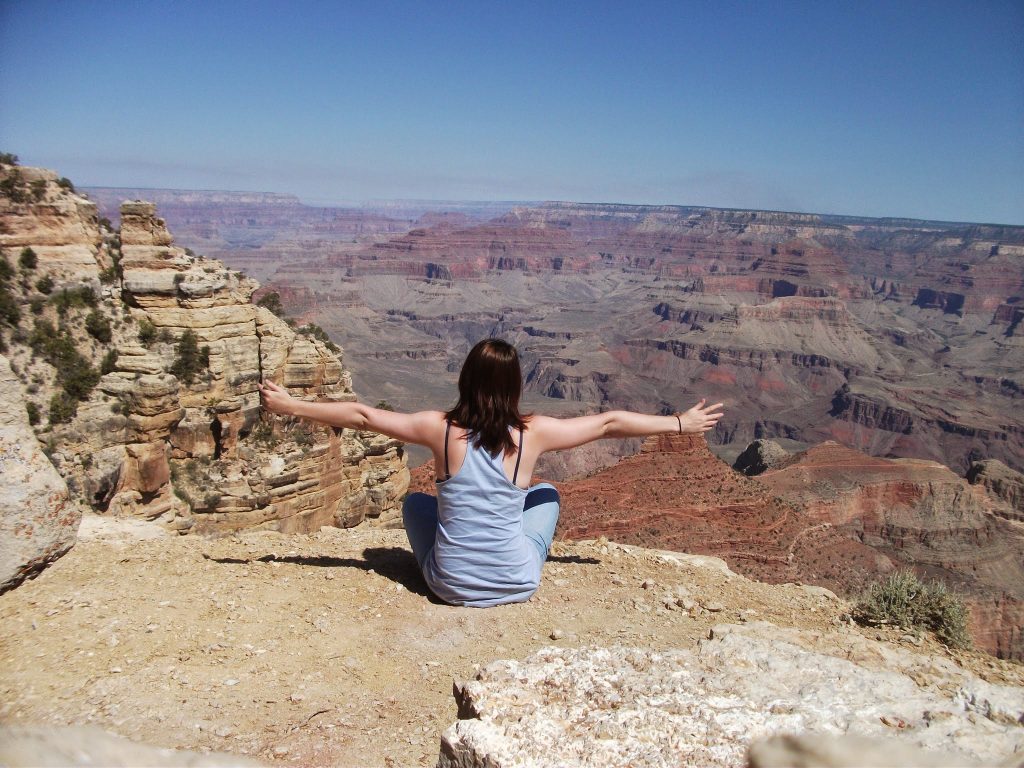 Having picked some spots that are somewhat spread out my next drop off was Yaki Point before heading to Yavapi Point and checking out the Geological Museum there as well. I did all the usual sit-on-the-edge photos and although probably not the best idea when exploring alone and while ill.

My afternoon comprised of various stops on the Hermits Rest route including Pima Point and an spot known as the Abyss which of course I had to stand at and look down. The shear size of the Grand Canyon is extremely difficult to comprehend both in terms of depth and vastness but this spot really helps if you’re on site.  The harshness of the Grand Canyon National Park is also not something that should be underestimated if you’re exploring the trails. The central village also displays the predicted temperature which also go incredible high into the 40Cs. I think if you get lost on a trek here you’re pretty much a goner.

Even with only a little hiking and mostly busing around the National Park, I feel like it’s been a long day so am happy to get back to my tent. When I get back to camp the group had decided to make smores. I reluctantly try a smore and the idea is definitely good and I quite like it but American chocolate is pretty horrible. Hershey‘s is definitely not for me and it really leaves an aftertaste.  I certainly like the camp ground tradition but maybe I’ll adapt it to tastier ingredients in future.

Have you every had to explore somewhere while ill? Or missed somewhere you were looking forward to due to being sick on the road?