After a very long trip from Strahan, starting with the bus service being incorporated into a school run and spending 2 hours of the journey with the same ‘talk for Australia’ driver I had experienced on a previous trip it was only a bus swap at Lake St Clair before I finally arrive into Hobart. It might have taken a while to get there but there was plenty to see!

So in Hobart I did a walkabout through the city shopping at Salamanca Place and Battery Point before visiting the MONA: Museum of Old and New Art, which had been recommended by several people. A brand new museum entirely the idea of one man and supposed to be ultra modern and new age so off I go.

It’s a half hour journey up the Derwent River passed Government House and then the ugly industrial bits of Hobart including the Zinc plant and travelling under the Tasman and Bowen bridges. I arrive off the ferry and climb up all the stairs at the museums front to be welcomed by various cool artsy kid staff with crazy hair and dressed entirely in black who introduce me to the museum and give me an iPhone to play with as I walk around. Apparently MONA does not believe in labels so if you want to know anything about the art the iPhone will tell you either on screen or audibly. Sounds cool but later proves to actually be really annoying cause mine kept resetting or the programme couldn’t find my location so didn’t know the art I was standing next to and the entire museum is dimly lit and having to read of a blaringly white screen ended up giving me a headache. 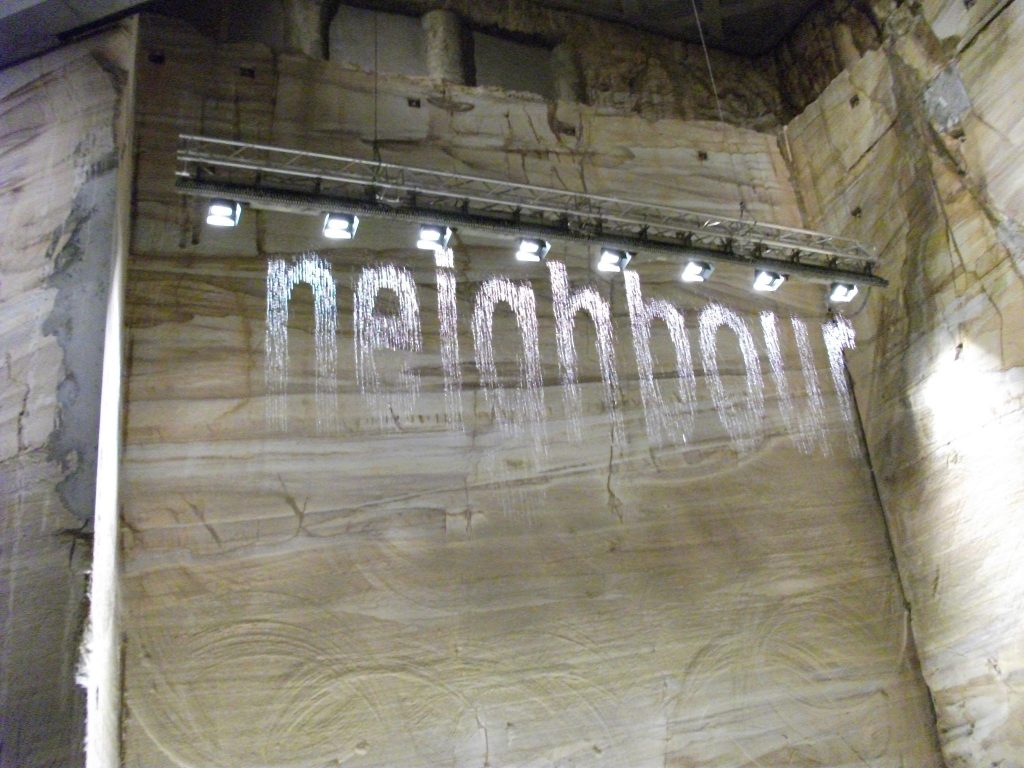 There were a couple of really cool things in the museum and then some just disguising nasty things. Since MONA is all “uber cool” the point where half of the museum is to shock you so lots of exhibits are all parent advisory areas. I don’t find these bits interesting, I don’t consider it art when something is just disgusting for disgusting sake. Most people seemed to think it was awesome and the guys who work there will probably tell you this stuff is pushing boundaries but its not really my thing. I did like a few things; a falling water piece that finds the words trending in online news and makes them into falling water droplets that spell it out and one that records the last 100 peoples heart beats in light bulb form so you follow a blinking line down a corridor and enter a room filled with light bulbs each displaying someone’s pulse. Only thing is the work wouldn’t display my heart rate on any of the 4 or 5 times I tried. The staff girl for the exhibit cheerily told me that if it doesn’t pick it up it means either your pulse is either too faint or you have a sporadic heart rate. I don’t like either of those options. Anyway, even if it wasn’t working for me it was quite a cool idea.

Other than MONA and wandering round town I was also doing a couple if days volunteering for Conservation Volunteers Australia (CVA) and it turned out we were building walkways and doing a bit of fencing. Though just a short stint I met some fun people and enjoyed doing a bit of hard work.

I also had two day tours booked after CVA so I could get to see a bit more of the East Coast. I manage to get a really good deal on them but it ended up one trip to Wineglass Bay ended up cancelled which was the one I really wanted to go on and second became more of a night tour than a day tour.

My first trip was down the Tasman Peninsula through Eagle Hawk neck and to Port Arthur to learn some more convict history. It wasn’t really a great tour and the winding roads of Tassie made me really ill again but I got to see some nice coastal scenery en route and learned some history on the way. The journey its self was a bit of a catch all bus ride for multiple tours and so I got dropped off at the Tasmanian Devil Conservation Park while others continued to other destinations.

The park was fun and and filled with friendly animals who were happy to pose for cameras which might have been simply because it was quite. Only problem, my camera decided to well and truly pack in and my lovely camera phone ran out of battery Nightmare for a travel blogger and quite a shame because the park had quite a few animal you only find in Tasmania including one I’ve decided to add to my Christmas list, a Quoll –  they are the adorable and I want one. I spent over an hour in the park getting to watch some devils devour their road kill dinner; hair, bones and all. The noise of crunching bones is a little scary but they look cute, just don’t try to cuddle one! Since there seemed to be only 3 of us in the park the sole keeper on site decided to bring out all the trained birds for us to play with rather than do a show. I got to hold a tawny frog mouth and have a Peregrine falcon fly through my legs proving that visiting attractions in off season can definitely be worthwhile.

My driver who was doubling up as a guide came back to pick me up and take me down to the next portion of the tour, Port Arthur, to see and explore the place in the 20 minutes of daylight there was left which was a little annoying. I got to see a few things and wander about the cells and read a bit of history. At half 6 we went on the Port Arthur Ghost Tour around all the haunted houses and prisons which turned out a history lesson in the dark. No scariness at all. The girl leading us told us that there would be no trickery and no one would jump out of the darkness, there would be no props but by the end I felt that would have at least added a bit of scary fun but oh well. I’ve now been in the 2nd most haunted place in Australia and felt and saw nothing. After the ghostless ghost tour we head back to Hobart.

My last day in Tasmania I spent most of my time packing stuff up though I did try to visit the Tasman museum but just couldn’t find it. It’s address is 40 Macquarie St but the street numbers go 81,38 85 81…since this makes no sense to me and after a frustrating half hour of wandering up and down side streets to locate the place I simply gave up and went back to packing.

My flight leaves about 9 and off I go back to Sydney for the last time before flying home on Wednesday, two days later. My Australia adventure is ending and it’s a little sad.