The road from Devonport to Strahan is a long one that goes via Cradle Mountain. This time the weather up there is cold and snow covered but no freezing winds or blizzard conditions so it’s a shame there’s only 20 minutes between buses and I don’t get to explore. From Cradle mountain to Strahan was a much longer affair, not just in distance but the route is a very windy one with thousands of corners and ups and downs in the road. What awaits at the end of all these twists and turns?

As the journey continues we pass through Tullah, Rosebery, Zeehan, Queenstown and finally Strahan. By Zeehan I’m feeling immensely sick and when we stop at Queenstown I’m unbelievably grateful when the driver suggests a stop to stretch our legs. I’m just desperate to get off the bus but after a 15 minute break in which I manage to get over my travel sickness we head the last 40km to Strahan which I am told contains 235 corners!

Since it’s only me and the driver on the bus he suggests I jump up front for a better view and to keep him company. This doesn’t bother me so up I go… bad idea…terrible mistake. I guess this is a lonely man as I get his life story, then his children’s and then I hear all about the eight grandchildren. That’s fine, if I keep him company for a bit I’m happy to do a good deed only the bus seems to be getting slower and slower until we’re puttering along at 30kph which means the journey to Strahan is getting longer and longer. A bit of weird conversation I can handle but I’ve already been on this bus for 4 hours and now I’m hearing about past love affairs. I really just want to get to my hostel. After what seems like forever I see the ‘Welcome to Strahan’ sign but my lovely driver Rob decides to give me the sightseeing tour of the town before dropping me at my YHA adding another 15 mins of chat. Finally, I escape from my overly talkative driver and arrive at my hostel but once again get a twin room to myself for next to nothing. I guess everywhere in Tasmania is desperate for guests this time of year.

My hostel end up being one those outdoorsy hostels where everything is in different buildings scattered around. Therefore, you have to go out into the cold if you want to use the bathroom or cook some dinner and in both cases there’s no heating in those buildings. Luckily I have a little heater in my room which just about counteracts the draft coming through the 3 inch gap under the door. Layers are the key to happiness or was it just survival ….

So Strahan has a few walks. The Hogarth’s Falls Rainforest walk is fine, a nice half hour walk to a waterfall but not particularly impressive. I do the walk round the bay which is much nicer and trek up a very steep hill to see the views out over Gordon River, Macquarie Harbour and out to the Southern Sea. I also decide to book myself on a Gordon River Cruise which despite managing to get a good discount for knowing the chatty bus driver is still kinda expensive but it’s the thing to do while in Strahan along with the Western Wilderness Railway to Queenstown which I’m definitely not doing. $139 to go 40km on an old train? I’m ok missing that even if lunch is included and you get a courtesy bus back to Strahan.

My Gordon River boat tour leaves at 8 in the morning and luckily, despite the poor weather forecast, the rain has held off, though it’s a pretty cold morning. Even though is a 220 seater boat there’s only about 13 of us on board. I bought the cheapest seat so I’m not supposed to be allowed to sit at a window but since the boats empty I can stand at one but I’m not to sit down. I’m quite happy stretched out on my sofa anyway, which is for group bookings but I’ve decided I’m a group of 1. 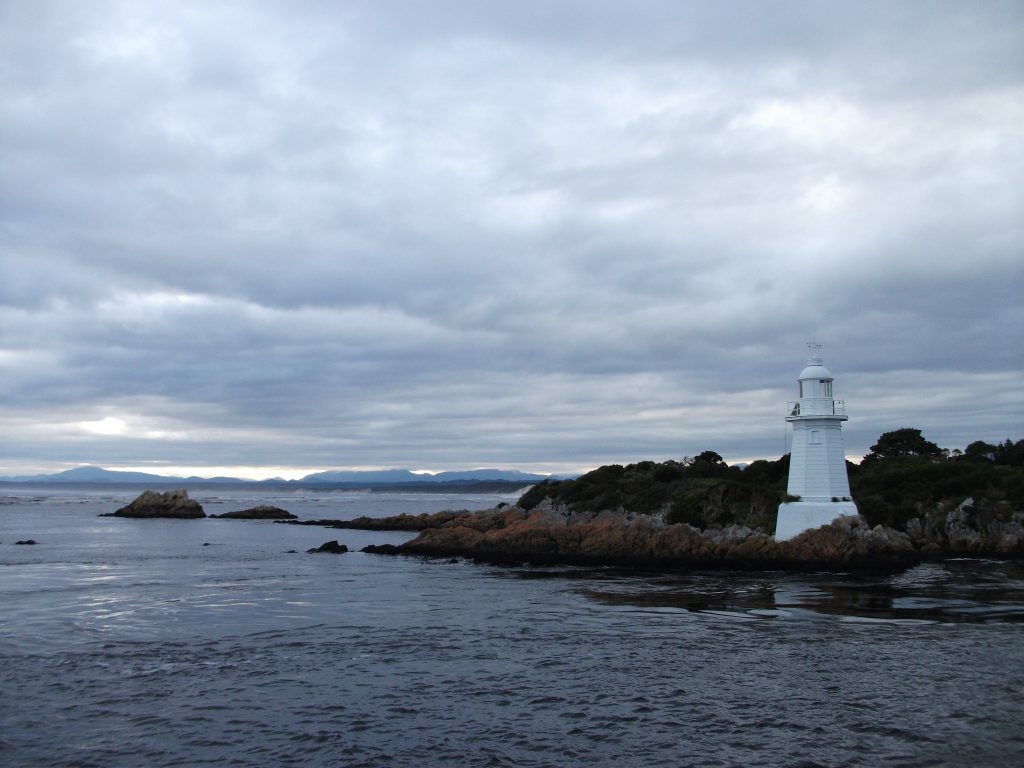 Even though this is a Gordon River tour the majority of our time is spent in the Macquarie Harbour. we first off we head out to the spot known as Hells Gates, named by the convicts sent to the islands. There’s lots of little Islands towards Hells Gates that were actually inhabited by lighthouse keepers and their families and then there is the slightly larger one – Sarah Island which was for the convicts.

Sarah island was the place re-offenders were sent and known to convicts and guards alike as Hell hence Hells Gates. We stopped off on the island and had a guided tour by a fantastic old man who is actually a retired actor and seemed a little eccentric. He gave us stories of escapes and revolts and of the people sent there and, strangely, some who requested to go there. One of the best stories was when the convict island was closed down 10 men were left behind with guards to finish a last boat that was being built from their slave labour. On completion and setting sail the convicts took over the boat dumped the guards off on the mainland and sailed all the way to Chile. Eventually they were found but they claim they were Irish sailors who got lost in the fog so had to be sent back to Tasmania to be identified. They were all sentenced to be hung but managed to talk themselves out of it including using the argument that the boat was never registered therefore they didn’t steal it from anyone. The guide told it the whole thing with fantastic enthusiasm, giving other visitors characters and playing parts himself. He claims it’s all a true story so that is certainly one I’d quite like to find out more about.

Our skipper for the day proved quite amusing too as he told little stories about this, that and everything including the houses on the islands the people in them and various gossip from the Strahan area. There seemed to be a long story about Sylvie; a woman who waves at the boat in her nightie every day but that the family were over in Hobart on holiday so we wouldn’t get to see her today.  We randomly stopped at a fish farm to nosy at what the men were up to as well. Turned out they were feeding some fish and gutting others.

Of course we sailed along a little stretch of the Gordon River itself as well and took a short excursion ashore to follow a short rain forest walk.. The river is so dark from tea tree run off that it gives an almost perfect mirror image of the scenery but even with these additions the water is actually among the purest in the world and despite not being clear is very safe to drink. Watching out the side of the boat for a while your eyes do get a bit confused with everything in duplicate mirror images. It’s a really weird sensation when you’re moving toward a bank cause you have both the real and the mirror image and your brain just seems to confuse itself. It’s fun. Other than the exciting mirror water though the Gordon River was probably the least interesting bit of the day but I very much enjoyed the boat trip. I’ve definitely been on more boats in Australia than the rest of my life all together.

My next stop is Hobart on the East Coast and hopefully I’ll get to do a bit of exploring of both North  and South from there. I’ve arranged some volunteering with Conservation Volunteers Australia (CVA) which starts on either on the 20th or 21st I just need to call into the Hobart office to find out.