One of the major draws for walkers to Tasmania is Cradle Mountain and even though it’s off season and the roads there questionable we decide to check it out as well as exploring the surrounding national park.  Make sure you wrap up warm this ones a chilly one!

Sunday is the day of my Cradle Mountain expedition and, having organised some transport to get there, a group of us head off. On the way we make a quick pit stop in Sheffield – “the town of murals”. Basically there was nothing in the town so to drum up some business and get some visitors the town started painting wee stories on all the walls, and I mean every free wall.Turned out the idea worked and now lots of people come or at least stop on the road through. 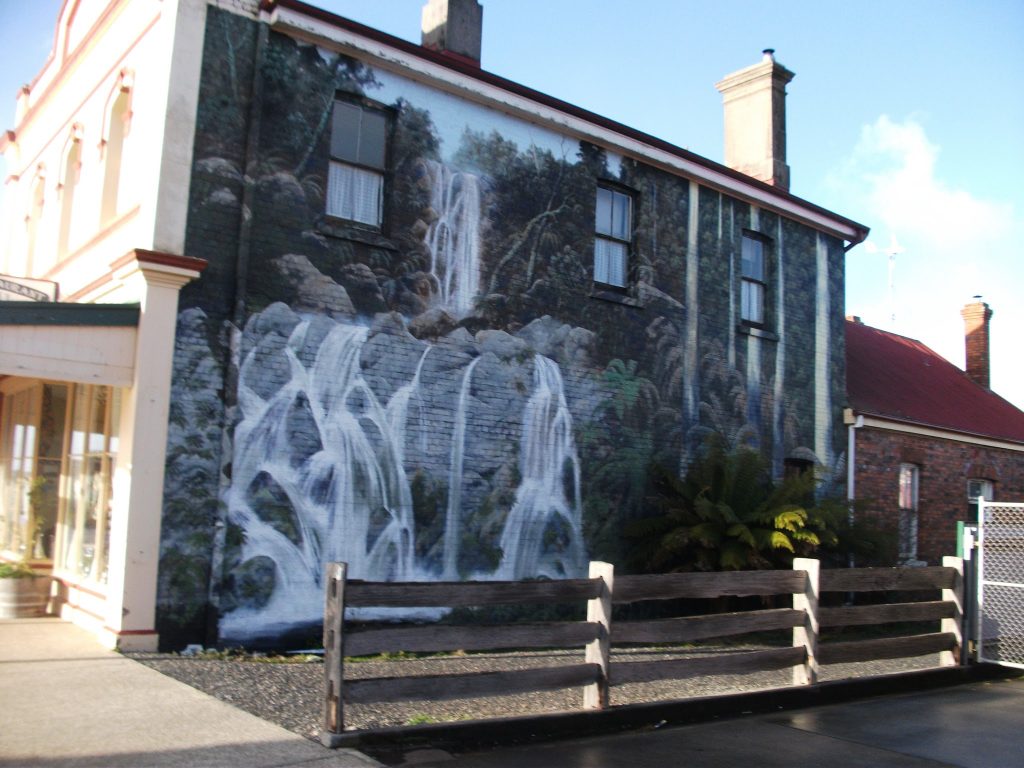 Anyway on we go to Cradle Mountain National Park. It’s a cold day with bitter gale force winds but once we get close to the National Park the rain that had been falling soon turns to snow. Now, I’m quite excited cause I haven’t seen snow in over a year and this is Australian snow which is weird; it’s Australia, it’s all sunshine and beach weather. We continue onward towards the mountain with the snow getting heavier, the winds stronger and visibility worse. Not far from the park borders we have to pull over as several cars have blocked the road slipping on the snow covered hill. After watching for a while a vote is taken and since we have chains in the boot we decide to proceed forward while everyone else seems to be leaving. It’s always fun to go against the flow. Who wants to be a sheep?

Finally getting to the rangers station to sign in and pay our park fees we are told we can’t drive any further in and that they are trying to get people out of the park but that the ranger shuttles were still running until the roads become impassible. So with a warning that we might not be able to get a shuttle back if the weather continued we took the risk of the 10k walk back in order to go see Dove Lake at the base of Cradle Mountain and maybe do some sort of hike. I’ll point out that we did have a local and expert hiker with us but even as a Scot used to hiking in the snow I would likely have turned back had our guide not been with us.

So after a 20 minute ride in the 4×4 shuttle we’re dropped at Dove Lake. Only we can’t see the lake or the mountain or indeed anything past the shelter hut right in front us. We hide out in the hut until I decide I’m game to face the howling wind and blizzard conditions. So I do a quick wander toward the lake and find a vague path before returning to report. 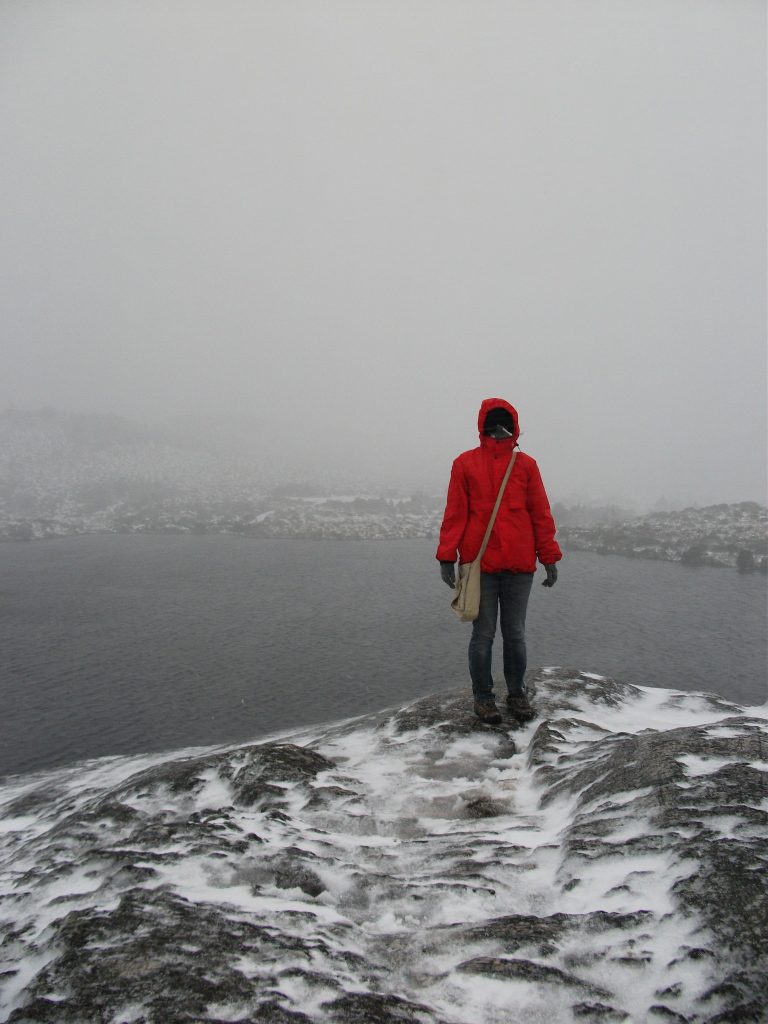 After a while we venture out in the hope of doing the Glacier Rock track. This time I’m wrapped up a bit better with no skin whatsoever exposed to the elements and we set off in the pounding snow, which I’m actually kinda loving, towards Glacier Rock. Basically all you can see is the person in front and no further but we do the walk, which is of course supposed to be a beautiful scenic view of Cradle and other surrounding mountains. When we finally get to the Glacier Rock, on scrambling up it, we don’t really have a view at all and even though Darcy, the experienced trekker, attempts to show me the direction of the famous boat house on the other side of the lake, it’s just not possible to see anything in the blizzard.

I take some pictures anyway just to prove I was there or perhaps just somewhere with snow but on the way back the skies briefly clear and we get a view of the mountain for about 2 minutes.

We attempt to do another short walk round to the boat house but the snow just gets too deep and we turn back. Only having my hiking shoes on, my feet are pretty wet and frozen as we wait to see if the Ranger shuttles are still going. After an hour it’s looking unlikely and after an hour n a half were set to give up and start the 10k trek back which in these conditions is going to take at least 3hrs. But tadah the shuttle appears out of the whiteness and we get a ride back. Quite a crowd had amassed at the shelter hut so we were lucky to get on since the others were told it’d be at least another hour til the next one.

As we make the very slow journey back to base camp it turns out a few wombats have come out to play. As they try and forage for food they’re quite easy to spot in the snow. We make it back and heat up a bit in the Visitor Centre and Ranger Hut before heading on back to Launceston.

It’s a long and fairly uneventful drive back and other than a quick stop at a Cheese Factory because Darcy had to pee. I found the factory quite funny cause they have lots of crazy cows everywhere to decorate the place and entice people to stop at the factory shop. The sign toilets was apparently enough for us though. 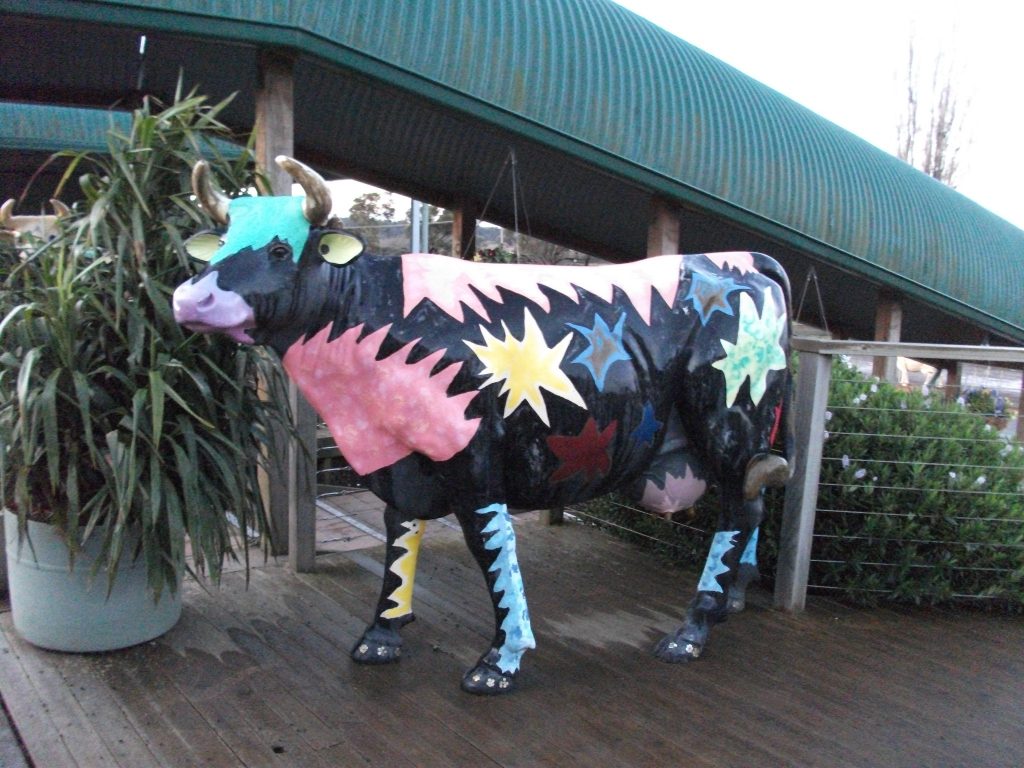 So the Cradle Mountain trip wasn’t really as good as we’d hoped. We didn’t get to do a mountain climb or a base walk and didn’t even see much on our Glacier Rock walk but a day in the snow is always fun. I was still disappointed that I didn’t get to make a snow kangaroo though, maybe when I get to Strahan on the Wild West Coast.

But first a little longer in Launceston and Devonport in the North.