So Townsville … Hmm. Townsville is an odd place. A big town or once again city but with no people. The entire place is empty, the whole time I was there, there was never anyone on the street, all the shops were empty- barely a sole to be seen.

Anyway I spent 3 days in the Capital of Tropical North Queensland during which I visited their Anzac Park, walked along the beachfront promenade known as The Strand and visited Queens park. All three where very nice but The Stand seemed to either be under repair of being upgraded as there was a lot of building work, similar to the city centre which was all under construction too. Townsville is built in the shadow of a massive rocky outcrop known as Castle Hill which is only a few metres shy of a mountain and can be seen looming over the city everywhere you go. I had planned to climb to the top but the heat in Townsville is very intense and everyday brought a cloudless sky so I decided not to risk heat exhaustion and just admire the mountain from the city rather than the other way round. 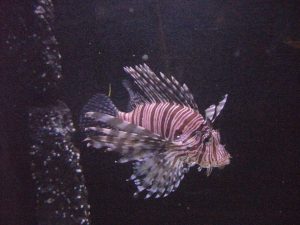 I also visited the Reef HQ aquarium which was quite good and tickets allow two day entry so on the second visit I made sure I was there for all the talks which were fantastic. One of the divers in the tank did a presentation on all the fish and sharks around him and though I did not mean to, I ended up on a coral tour talk thing straight after where I ended up the only touree. After that fun I got to visit the Turtle Hospital attached to the Aquarium to see some of the animals they had in care. The hospital is only open to the public at certain times so I was lucky to get so see the rescued turtles. A few of the sicker ones were quite sad to see but we heard a couple of success stories too and several turtles in the hospital were ready for release as well.

Other than that I didn’t do too much in Townsville but from here I catch a ferry across to Magnetic Island for a few days. Apparently there is a full moon party on the Friday night with seems to be a big thing though I has not heard of it until I tried to book a hostel on the island. Not sure if its something to be at or maybe just to be avoided. I’ll make my mind up when I get there. Seawords to Magnetic Island.