I arrived in Airlie Beach at half nine and luckily was able to check into my hostel. I hadn’t slept on the bus but thought it was a better idea to stay up rather than go straight to bed so found some breakfast and started the hunt for the best deal on a Whitsunday sailing tour. This was not an easy task since there are so many sailing boats, tour companies and various agents offering deals on varying days and add on activities.
Eventually I find and book a two day sailing tour leaving the next day for a bargain price of $175 which includes a stay over on Long Island.

It’s an early start for my sailing trip being picked up at 7 for my shuttle to Abel Point Marina where I’ll depart on my boat. At 8 we depart on the Camira; a catamaran type boat completely kitted out in an awesome purple colour. It’s barefoot sailing so I’m quite happy since I seem to have become a barefoot backpacker. There are a lot of us on the Camira and head out to do some Island cruising. No matter where you look off the boat, the Whitsundays provide an amazing view of tropical island paradise. There are 74 islands so we we can’t sail around all of them so leaving the marina we sail round the mainland through pioneer bay and past pioneer point and out to Daydream Island where we pick up a few more passengers. We sail to the Molle Group and go between North Molle Island and Mid Molle through a section of water funnily enough called the Molle Channel. Passed this point we’re in a bit of open water and wind can pick up so the engines are turned of and the sails let out so we are actually moving under the power of the wind alone and we were actually going pretty fast.

We stopped off in-between Hook Island and Whitsunday Island for those on board who wished to snorkel to go do that. Anyone entering the water however had to wear a wetsuit or stinger suit because even though were technically out of jelly fish season you do get the odd lost jelly bobbing about. While stopped those who weren’t snorkelling got our own water show when a big crowd of jet skis landed upon us and decided we were a good audience to do some tricks for. After talking to a few of the riders turns out they are travelling from Townsville to MacKay completely by jet ski to raise money for charity. It’s a long way by jet ski but they stop in on Coastal towns along the way to sleep and refuel the jet skis. With 32 jet skis and around 45 ‘crew’ I guess it’s safety in numbers out on the water but not something I would attempt. After that morning tea was served and we were off again to circumnavigate Whitsunday Island. 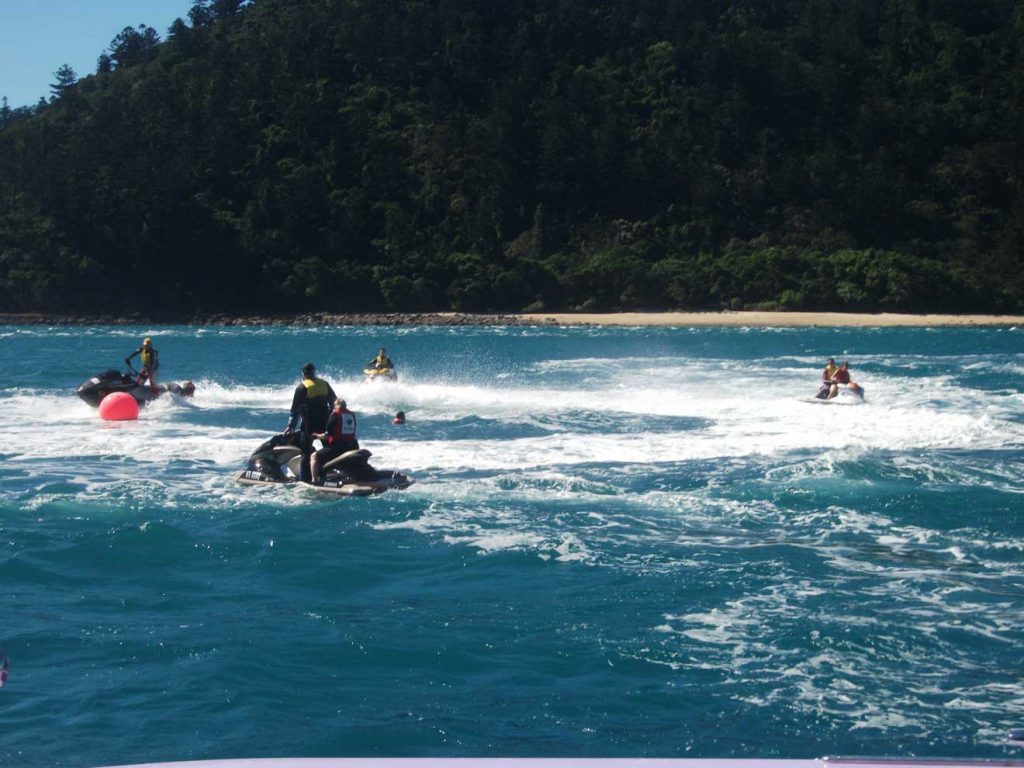 After some more sailing we arrive at Whithaven Beach on the other side of Whitsunday Island. The boat drops anchor and we are taken over to the beach in the smaller speed boat to play on the beach for a bit before a very big and quite tasty lunch is served back on board.

At the end of the day myself and a few others are dropped off on Daydream Island where I do a quick ferry island hop to Long Island where I will be spending the night. As we arrive there is an amazing sunset over the islands. The hostel on Long Island is part of a resort so there’s lots of things to do and on check in were told of the various activities we can do in the morning. Its a step up from what I’m used to. 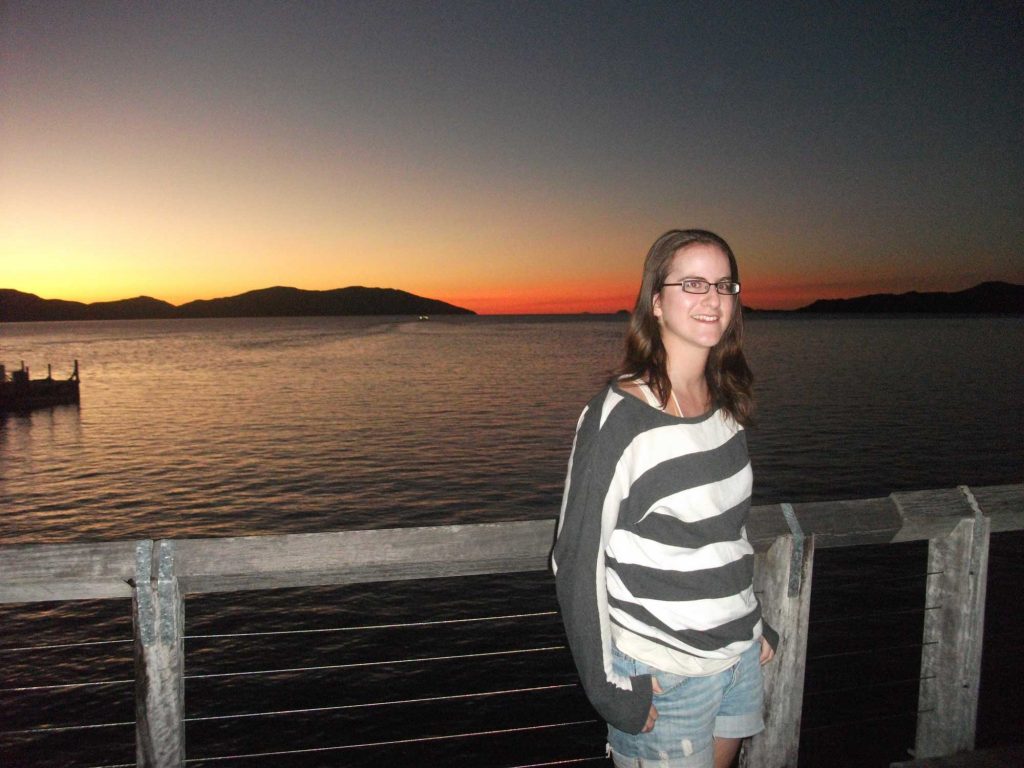 After finding the hostel which is a little walk into the forest I settle in. Wandering outside and hearing rustling it turns out there’s quite a lot of wildlife around and it doesn’t seem to be shy. I bumped into a wallaby and her joey foraging outside the hostel cabins and they seemed perfectly happy for me to be there and to take photos. Later, the resort next door had some live music so I headed down to that with the two others in my room for a bit before heading to bed for some much needed sleep.

The following day I avoided the guided bushwalk, heading on my own in the opposite direction and found a nice secluded beach with views over the tiny Pelican Island and where if you paddle in the water lots of things will be swimming around. Back at Happy Bay where the hostel is the tide was out pretty far so I wandered out to see the exposed coral and bumped into a few fish and some big rays in the shallow water. At two there was a fish feeding ‘tour’ where one of the staff throws bread for the Batman fish at the jetty. It was actually quite amazing as the fish were much bigger than I expected. The were probably half the size of me and apparently they eat jellyfish. 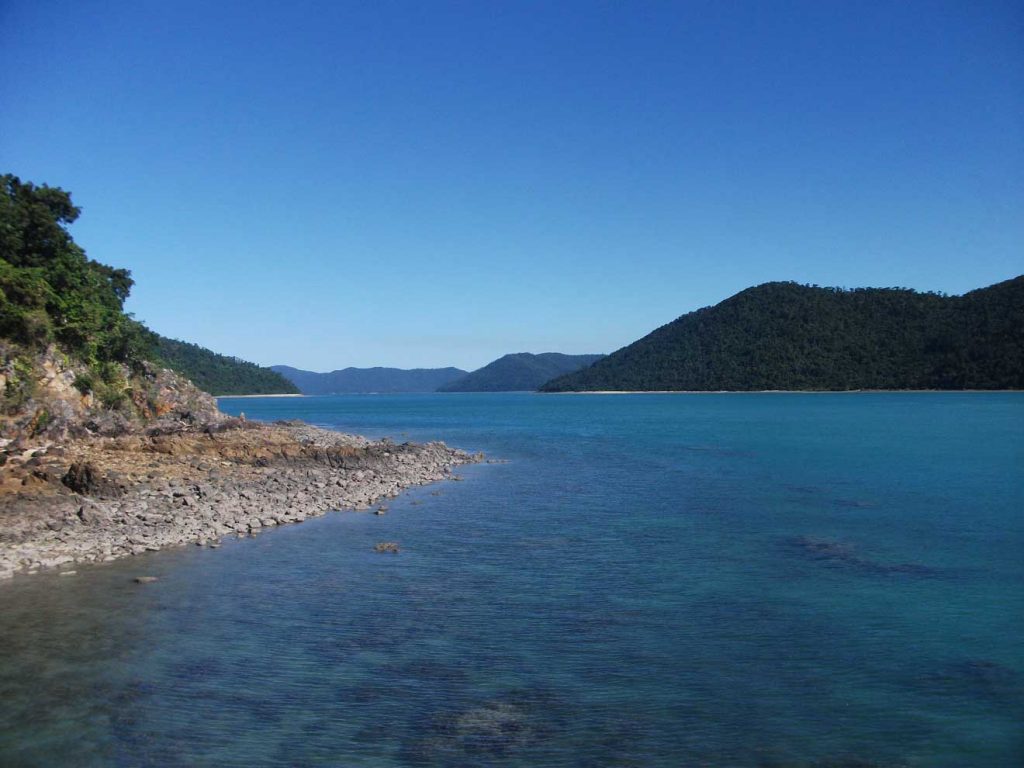 An hour later I was on the ferry back to Airlie Beach.

I spent the next two days lazing in Airlie Beach with a friend I had made back in Rockhampton and went for drinks with another I had met on Long Island. Airlie itself was really nice but my hostel or more specifically my room mates in the hostel were much to be desired. On night one 18 of them decided to have a party in the room til 1 in the morning before a night out and then returning at 3 to make more noise followed by a second night of partying where I got in a shouting match with a Kiwi boy and security ended up in the room twice. The fun of hostel life eh?

Anyway I was glad to be out of there on the Monday and off I headed to Townsville for a few days. After 4 and a half hours of bus journey through nothingness we arrived in Townsville where to my delight I ended up in 4 bed girls only dorm which even turned out to be empty the first night. Perfect.