We recently returned from the beautifully sunny and picturesque country of Montenegro. We had spotted a cheap flight deal at the right time of year and just went for it but to honest we hadn’t really heard much about Montenegro before be hit that book button and I suspect maybe you haven’t either. So here are some of the quick basics of Montenegro to make your travel decision easy.

Montenegro is a small country in Europe. They are not within the European Union or within the Schengen Visa area but is ideally located near many of these countries for anyone looking to incorporate travel through the region into a “Europe Trip”. Montenergo is one of the countries which formerly made up Yugoslavia and so can be found bordering Albania, Kosovo, Serbia, Bosnia and Herzegovina and its ever-popular neighbour Croatia. The country is largely landlocked bar a strip on coastline which backs onto the Adriatic Sea.

How do I get there?

Popular routes include as part of a Balkans road trip where many include a short stay in Montenegro while exploring neighboring countries. In particular many “do” Montenegro as a day trip from Dubrovnik, Croatia. While Montenegro is a small country, we definitely advise at least a few days to explore all the different places as there is a diverse range of towns and cities as well as wondrous wilderness areas to see, which a day trip just couldn’t do justice to. If you’re SUPER short on time them this might be an option for you but it would certainly only give you a brief taster of the amazing place.

For longer stays, bus routes run from neighbouring land border countries, ferry routes run from both Croatia and Italy or you can do as we did and fly directly. There are two international airports in Montenegro. We flew into the busier Tivat Airport which is located on the Adriatic Coast but there is also a second smaller and more centrally connected airport, Podgorica, which is also known locally as Golubovci Airport so bear that in mind when booking flights.

Direct flights arrive at both airports from throughout Western Europe and the UK but some routes are subject to seasonal demand and only fly during peak summer season. On our trip we travelled to Manchester Airport in England and flew with Easyjet who currently have a bi-weekly service. This was the first year the airline flew to Tivat so these might change based on demand – we flew in October and flights were full both ways!

What does Montenegro have to offer?

Montenegro is a truly beautiful country with fantastic natural landscapes. From the amazing coast views over the Adriatic to the heights of Lovćen or Durmitor Mountains there is a lot of options for outdoors enthusiasts.  Despite being only 14 sq kilometers in size Montenegro has five national parks with around 10% of its land protected.  Top destinations to explore the scenic side of Montenegro include Skadar Lake, Crnojević River, views over Boka Bay from Lovćen and the Nevidio Canyons. If you’re looking for adventure sports, perhaps give kite surfing in Ulcinj a go, skiing is also a popular activity within Durmitor National Park and one of the top activities you’ll find in any tour brochure is rafting in the Tara River.

If exploring local heritage is more your thing the cities of Montenegro are a wealth of culture and historical sites. While the current form of the country has only existed since 2006, Montenegro has had a varied and often turbulent history and has amazing stories to tell from it’s time under the Ottoman Empire, unions as the Kingdom of Serbs, Croats, and Slovenes and under Yugoslavian rule. You’ll find influences from so many cultures and periods of history from Venetian to Communist. The former capital of Cetinje is a lovely spot to explore but is also popular with tours as the perfect setting for political and history talks on the countries spectacular past.  Of course a big draw is also the old towns of both Kotor and Budva which have beautiful narrow streets within fortified walls dating from 5BC!

WANT TO KNOW HOW MUCH WE SPENT? – Our Montenegro Budget Breakdown

Of course sometimes you just want a week to relax, so if this is more your thing that one of the many towns and cities along the Adratic Coast will certainly float your boat (of perhaps your lilo). There is a wide range of options to chose from and places along the “Budva Riviera” provide accommodation across the spectrum from luxury all inclusive resorts to self catering apartments all generally within 20 minutes from the beaches.  It’s worth noting that Budva itself is a very popular Russian holiday destination so in peak season it will be chocka block. You can try those further along the coast such as Bečići, Pržno or Petrovac but if you have the cash to splash there is always the private island Sveti Stefan – rooms are only a mere £1000+ a night!

Montenegrin’s are very hospitable people and will love to promote their food and drink on you. They are very proud of their prosciutto which is know locally as pršut and of the national drink raiki . If you’re into food Montenegrin will be more than happy to feed you and specialities typically involve stews and lot of lamb and beef dishes. It is worth noting that like many Balkan countries, vegetarians will find it tough going here are there is a very meat heavy diet, if you’re okay with fish then there is plenty of fresh seafood on the menu.  If these aren’t quite your thing then don’t worry there are also the universal basics of pizzas and burgers on sale in most towns though don’t expect to see any McDonalds, KFC or Burger Kings in even the large cities.

Visa Requirements: If you’re from the UK, USA, New Zealand or Australia then no visa is required for short stays. Most other European countries are also able to travel visa free but as always check your own country’s government advice as well as the Montenegrin visas office.

Currency: Euro. While not an EU country, Montenegro has opted to use euros as it’s official currency.

Language: Montenegrin. English is widely spoken in tourist locations but not always. Due to its Soviet past some signs will still be in the Cyrillic (Russian) alphabet but we were told this was on the decline, however, in some locations such as Budva large numbers of Russian tourists mean Russian is also widely spoken or on signage. Other languages such as Spanish are less common but tourist attractions and accommodations are eager to advertise what languages they can offer.

Tap Water: Safe to drink. Tap water is perfectly safe but tasted a little “chlorine-y” to our Scottish palate. We still drank it the majority of the time but if it’s your preference bottled water can be purchased from supermarkets very cheaply and natural water sources are actually some of the cleanest in the world.

Bugs: Yes. There are mosquitoes in Montenegro but we didn’t actively notice any in October. We did return home with a few bites but we didn’t require any insect repellents during our stay. If you’re planning a lot of nature-based activities this might be a good shout.

Anything else? If you are not staying with a hotel or hostel (i.e. a private rent, staying with friend or airbnb) then you will need to pay a tourist tax and register where you are staying with the local tourist office.

Have you ever visited Montenegro? 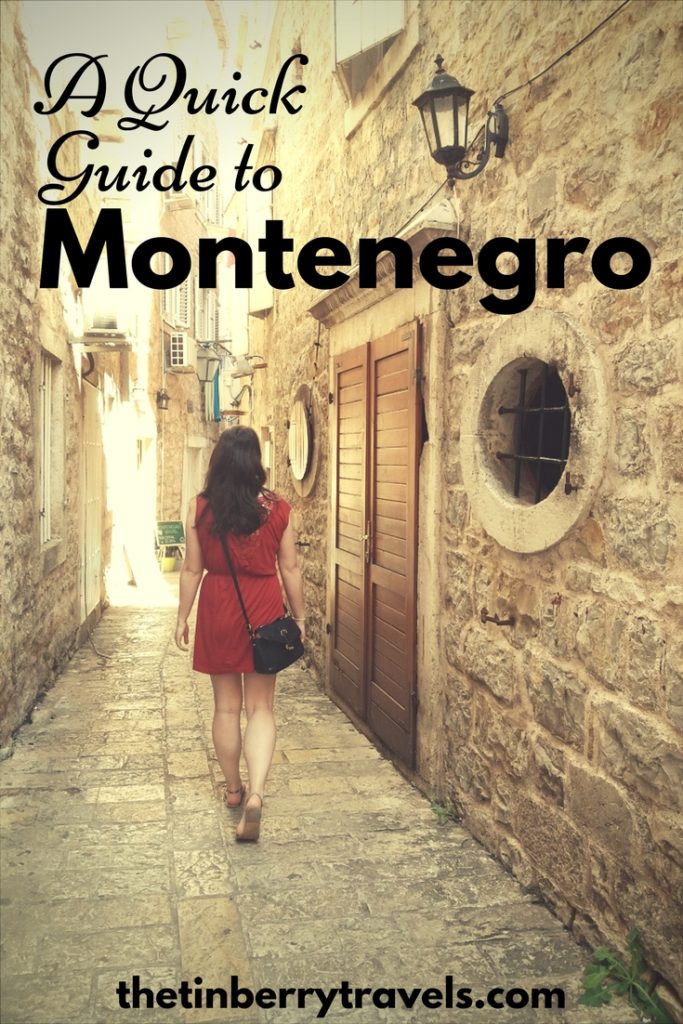