So from Alice Springs I head out in a three day camping trip to see the sights of The Red Centre. Since its a five hour drive to our first stop we leave Alice at 5am at which time it is freezing…. ok not quite but two degrees Celsius is close enough.

After two hours on the road, in which most of our group of 14 slept, we make a stop at an isolated cattle station which also serves as a petrol station and after a brief stop it’s back on the road for another three hours before getting to Kings Canyon. Driving through the landscape you can definitely see why this is “The Red Centre”, even with rainfall this year adding a bit of “greenery” the ground is distinctly red. The area is actually entirely sand, originally moving dunes before spinafex grass was introduced to hold it together and colour itself comes from the high iron content of the sands being oxidised. In essence it’s just a big rust pit and Uluru a big rusty rock.

Kings Canyon is our first trek of the trip and is a three and a half hour hike up to the of the top of the Canyon before going round the rim. By now the temperature has reached around 28 degrees so I’ve peeled a few layers off since the early morning. Luckily we stop fairly regularly as our guide, Linc (Lincoln), tells us about rock formations, how the canyon was formed and history of the area and a few Aboriginal practices. He explained which things Aboriginals would eat and what certain plants and trees were used for and even explained how a boomerang and spear would be made. In addition we got a few examples of Aboriginal tribe punishments including using a plant called Yippi Yippi which, having done something bad, an Elder would put in your eyes to make you go blind for approximately two weeks. This is of course after they’ve taken you on a few days trek into the middle of nowhere. If you make it back then they like you again, if you don’t they got rid of a trouble maker. 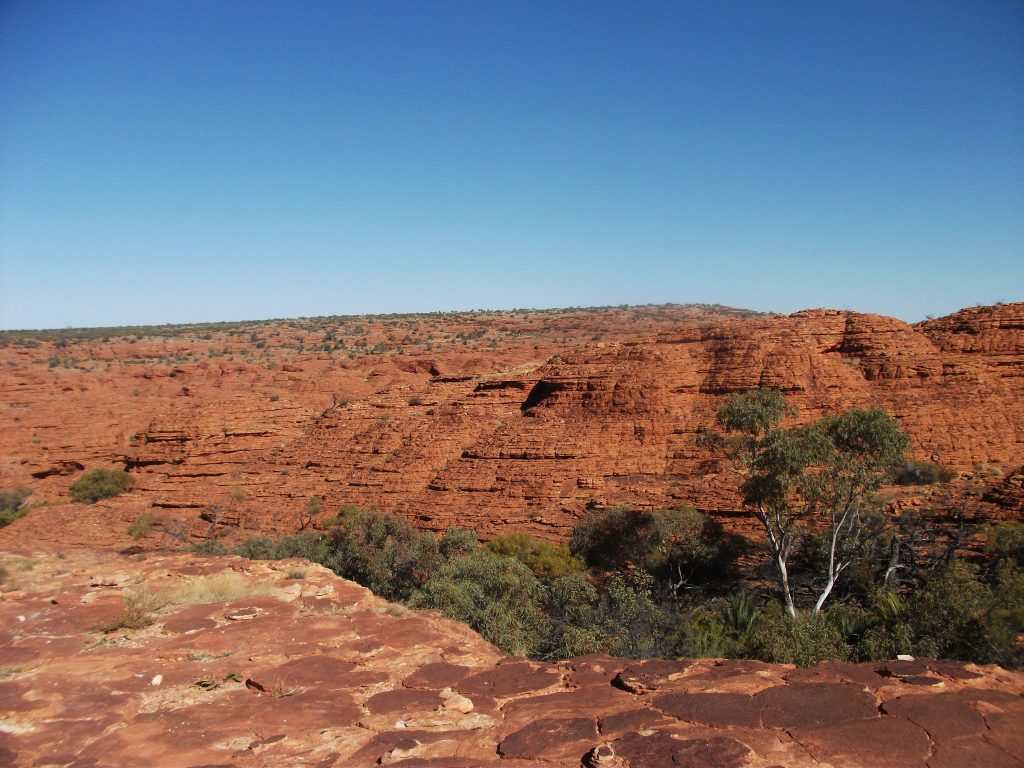 The canyon itself is pretty impressive and I’m quite glad that the trek is a proper hike rather than following a path which is neatly fenced. In many places we’re scrambling up rock faces and walking along tiny cliff edges. It’s a pretty exhausting couple of hours, especially in the heat but once we get back to our little mini bus were off to our first camping spot just outside another Cattle Station at Curtain Falls. On the road there Linc, points out Mount Connor which most people mistake for Uluru when driving in through The Red Centre hence it’s been given the nickname Fooluru.

Our camping spot is a bare patch in the middle of nowhere down a 10km dirt track from the cattle station and our camping is as basic as it gets. We have swags, a fire and lots of pretty stars. It gets very, very cold as soon as the sun goes down and when we finally go to bed I’m sleeping fully clothed in an ultra thick sleeping bag inside my swag. Turns out that’s not really warm enough as I wake up several times through the night and end up adding an extra jumper. To make it more fun there are little kangaroo mice everywhere and they like the heat of your sleeping bag so try to get in with you. 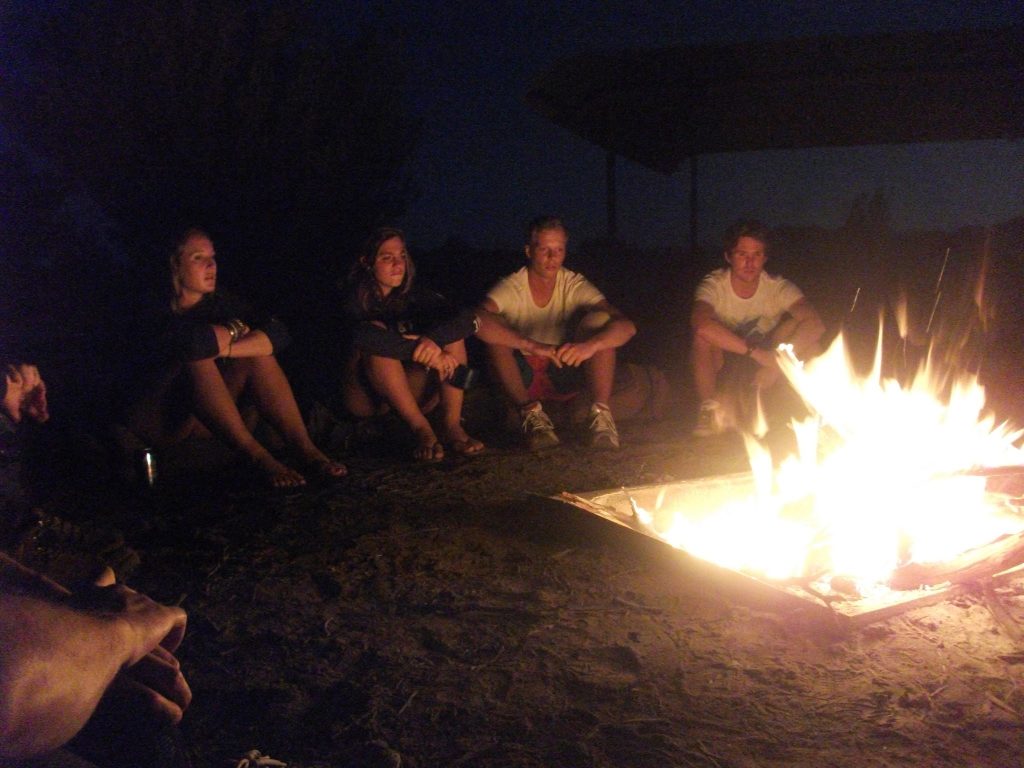 In the morning I have survived the mouse attack but cant say it was the best sleep of my life as we make our 6 o’clock start heading out to get our first views of the famous rock. After a quick breakfast it’s yet another few hours drive to the Uluru -Kata Tjuta National Park. Our first stop is at the cultural centre to learn some of the Aboriginal stories surrounding the rock as well as it’s formation and markings. These are actually quite cool and just reading the stories of Dreamtime Creatures fighting or doing mischief and coming to a sticky end to explain why a crack in a rock exists is much more interesting than any geological science explanation.

After the cultural centre we head to Uluru to do a short walk around part of the base where we are told the story of the Mala people who came to do ceremonies at the rock and whose story includes a monster dog sent by another tribe. All around the base there are various places that photos are prohibited because they are highly sacred places so I’m wary of my photography and simply admire some of the artworks instead. 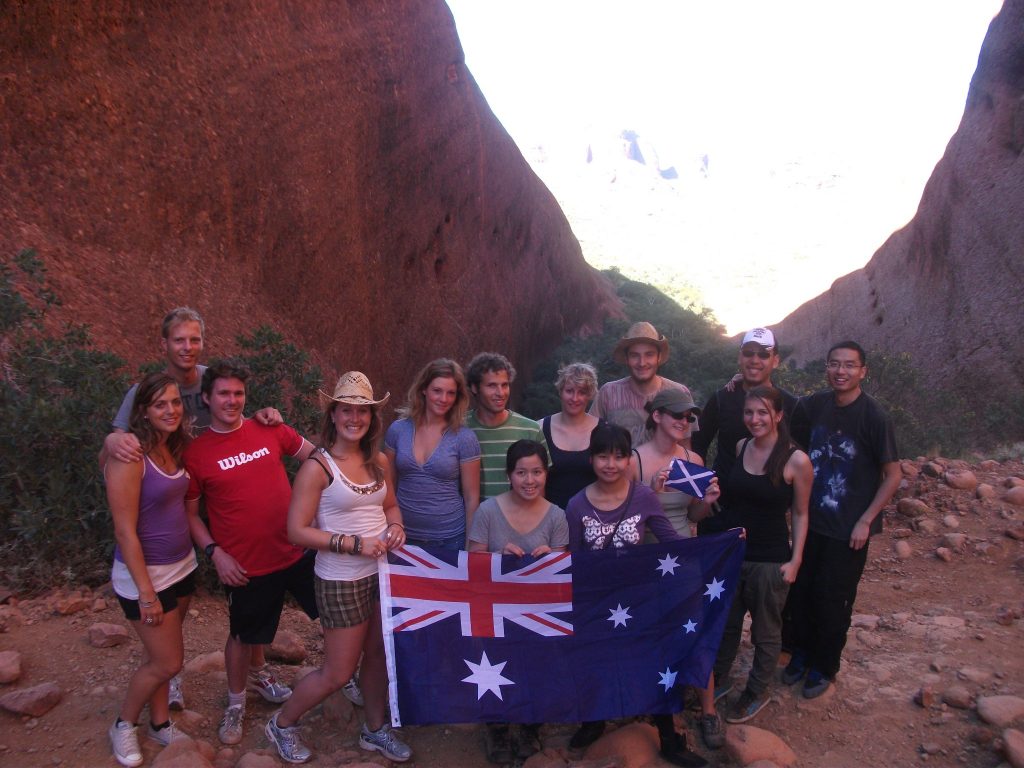 After Uluru we head to Kata Tjuta also known as the Olgas for another hike through amazing rock formations. On the way we get some more geology lessons on how the place was formed and how Australia itself formed over millions of years and came to look the way it does today.

After our afternoon at Kata Tjuta we head back to Uluru  to witness the spectacular event that is an Uluru sunset. We set up our little temp camp and prepare our campervan cooked meal in preperation of the event while near by the very fancy tour groups set up tables of champagne and gourmet appetizers. Sunset at Uluru is a bucklist item for many people and you can make it as cheap or as expensive as you like. If you’re looking for luxury you can book one of these over the top tours but at the end of the day we’re all watching the same view and to be honest I’m quite happy with my camp stove meal.

Once the sun sets we pack up and head to our next camp spot which is actually a proper campsite as part of the National Park so there are even facilities on site. We’re still in our swags of course but this time we have a school group on either side of us both with a massive catering vans attached to their luxury coaches. Well those school children were clearly experiencing the real outback camping. This time I decide to use my sleeping bag as well so I’m now in a summer sleeping bag inside a winter sleeping bag inside a swag while still fully clothed. Turns out its still kinda cold but luckily no mice this time.

In the morning it’s a 5am start this time and once again we return to the rock,  this time to watch sunrise over Uluru while having our fry up breakfast. Unfortunately it’s utterly freezing, so that kind of spoils the experience for me. While producing different colours from the sunset and being a mutch quieter affair that the previous night having to stay wrapped in about six layers as well as my sleeping bag was a little too much for me. 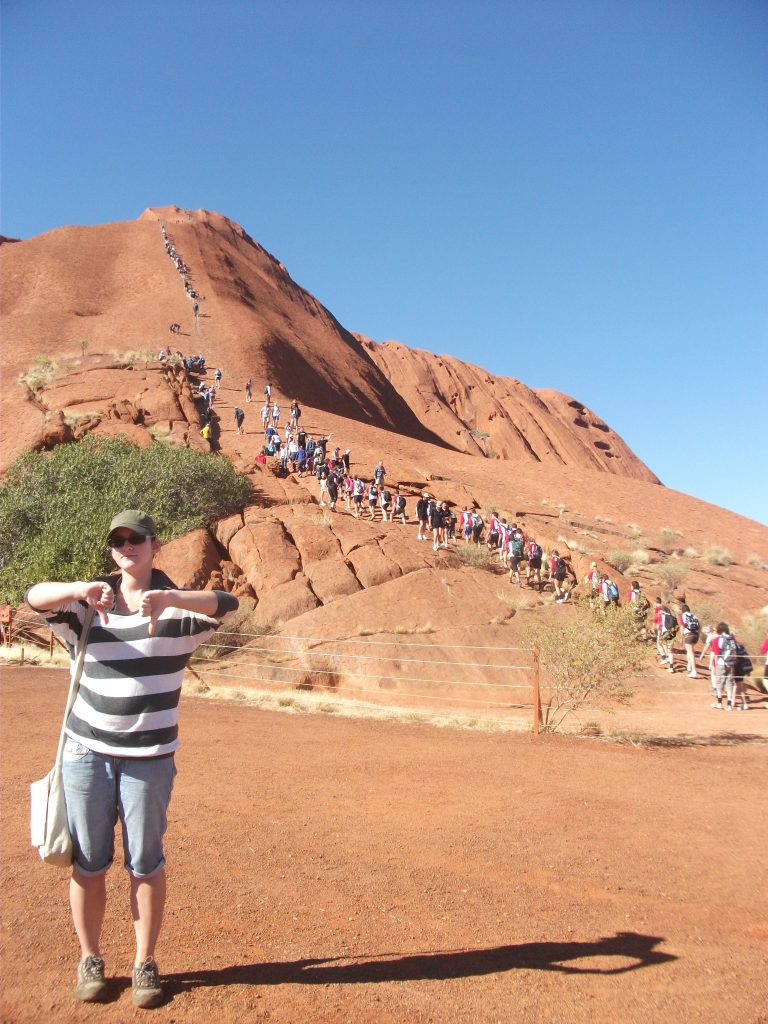 So we all get some pictures of sunrise and head on over to again explore the base of Uluru. We have the option to climb or do the base walk but no-one in our group wants to climb so we all opt for the base walk. It’s still icy temperatures so I don’t really enjoy the two  hour trek around the base as I feel a bit ill afterwards having been out in the cold for so long. It’s really odd to see so many people climbing as there are signs everywhere asking people not to climb, the national park ticket you get at the start states do not climb and right before you go up there is a massive board telling you not to climb but I guess if you want to do it that bad off you go. Its not a particularly interesting climb and there’s not even a good view from the top and added with the fact on average two people die a year climbing Uluru, never mind the supposed aboriginal curse I’m just not interested in going up. But we do see tour bus after tour bus empty out and go straight up the rock including many Aussie school groups.

So once everyone is all “rocked” out we begin the long journey home via a Mount Connor look out for lunch and a camel farm. I’ve been quite looking forward to the camel farm and the opportunity to ride a camel. There really massive creatures and when they awkwardly stand up and you’re thrown into the air it’s good fun. Sitting on the camel while it walks is really rocky as it plods it’s gangly legs but once they’re running it feels just like a horse in trot. The gait is exactly the same but you are at least double the height than of riding a horse. 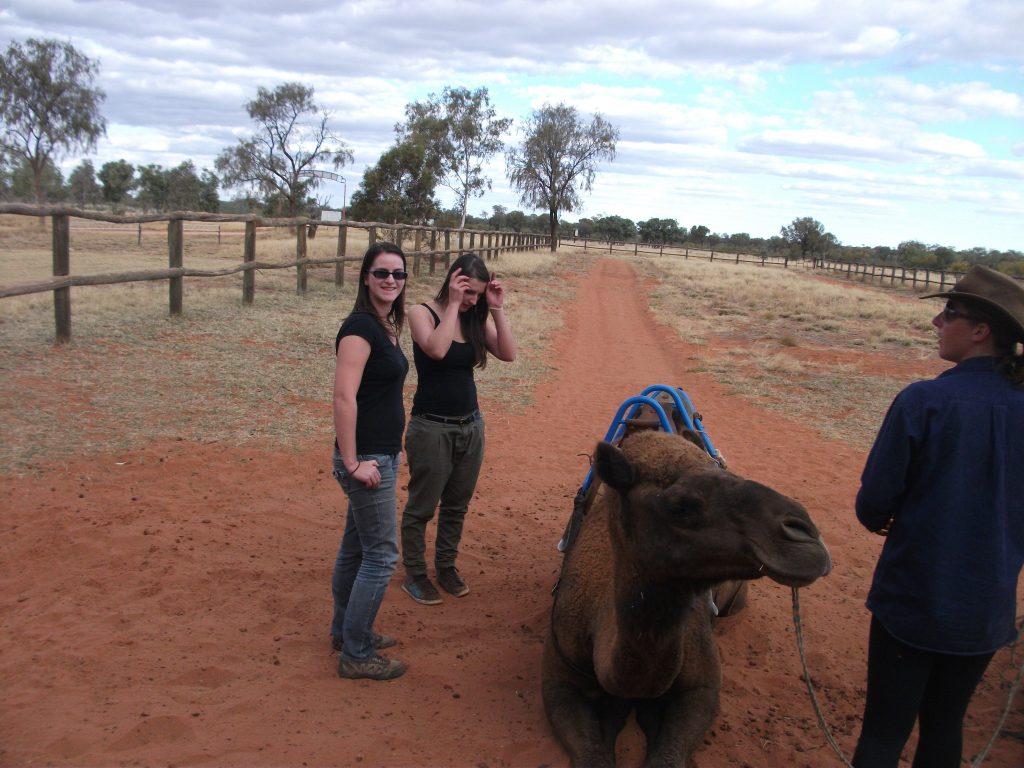 What makes it a bit more exciting is that these are wild camels that the camel farm have caught and tamed in order to compete in the camel cups. As well as the brumbies, which I saw a herd of at the start of my Uluru tour, central Australia has a million wild camels descendants from those used to build the Ghan railway line. It’s good fun but just to spoil it, while on the camel a Dutch girl drops and breaks my camera. So the rest of my journey back to Alice I spend trying to get the lens back into the right position and get iron oxide sand out of the innards. The places themselves were really awesome to see and I can tick off another must see off my Australia list.