Leaving Bundaberg on the Greyhound we ended up in some typical Queensland weather with one of the scariest but most exciting lightening storms I’ve been in over here. Reaching Agnes Water it turns out I’m in a really nice hostel and even get upgraded to an apartment for 10 minutess before the reception changes it’s mind and puts me back in the 10 bed dorm. Annoying.

I have to swap hostel in the morning as well cause this one will be full of little surf life savers. I’m also stuck with a couple of really annoying posh English girls who are distraught that there isn’t a KFC or McDonalds here and that there isn’t lockers in the rooms. This hostel is pretty amazing for $24 and definitely compared to what I’ve been in lately, but nothing seems good enough and they wont stop complaining. And of course there’s the creepy guy doing I guess some kind of weird yoga with random push up sessions; it was rather odd anyway. Shame you can’t pick who you share with.

In the morning I swapped to a hostel down the road and bumped into another girl from home. From Hamilton, from my school and in the year above me.

I was sure I recognised her when we got in the mini bus but did not click that she might actually be the person I know rather than just look like them. Small world or what.

Day one and I trekked the 8km to neighbouring 1770, birthplace of Queensland. On the way there I walked along the beach which was one of, if not thee most  most stunning beach I’ve seen in Australia. Forget Fraser I’ve found my paradise and it’s Agnes Water. Stopping for lunch at the end of the beach the amazing view before heading inland to find the road to the headland. Instead of getting straight on the road I ended up following what seemed to be a track around the rocks and ended up at a weather station so that was fun. I made my way to the headland lookout which wasn’t really as good a view as I’d hoped but on the walk back by road along the other side of the land outcrop there was some awesome views as well as the actually landing point of Cook. On the long walk back I stopped in the town of 1770 or Seventeen Seventy as some signs say for what I feel was a well deserved ice-cream.

The round trip took 6hrs so pretty much filled my day and since I’d done a lot of walking I was happy to make some grub and have a quiet night.

The next day was a lazy beach day, which I haven’t had many of in a while. I was mainly attempting to expand on the tan I had gotten from the previous fun day in the sun but not sure if it actually worked.

On the last day the Greyhound bus leaves at nine at night so I have another full day in Agnes Water before moving on to Rockhampton. In the morning I head off on a short woodland walk to a lookout point over Workmans beach which was an ok view but the off the track ones where you can climb up the rocks were much better. On the way back to town I made a rather unwanted wildlife encounter when I turned a corner and walked straight into a brown snake on the path. It was not best pleased and decided to have a go at me before slithering off into the scrub. No bites just a small heart attack. Quite happy I wore shoes as I’d spent the last couple of days mainly bare foot. Not a fan of wild snakes especially when they jump. 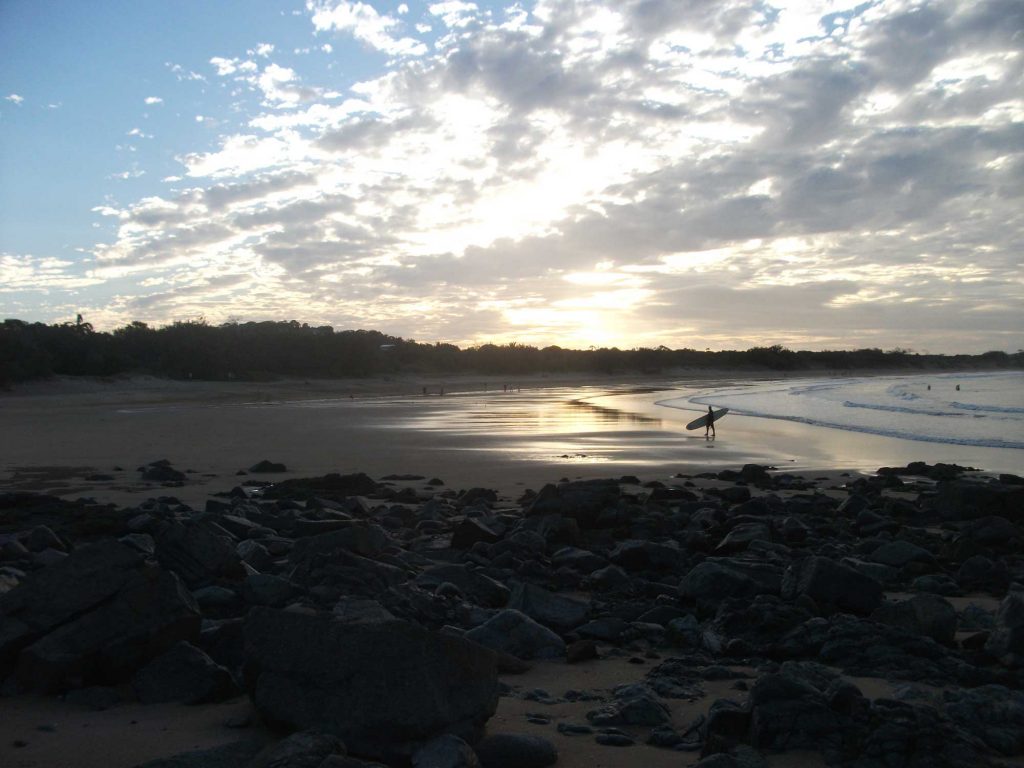 Yet another fun and very packed Greyhound bus takes me to Rockhampton where I annoyingly arrive in the middle of the night miles from the hostel. The hostel informed me to get a taxi and find someone else headed that way to split the cost but I find no one else. I’d prefer to walk but I guess a taxi is better than a hour walking with a rucksack in a town I don’t know in the dark.