The road to Robe was much sunnier than the previous days and according to Andrew a much better drive. Instead of horrible windy roads in cold wet weather we got nice straight roads that went on for miles and the beating sun overhead; now that’s Australian road trip weather. This portion of the trip felt much more like Mad Max territory than anywhere I’ve been up to now with the scenery outside turning from the usual green to the dusty yellows of baked grasslands. 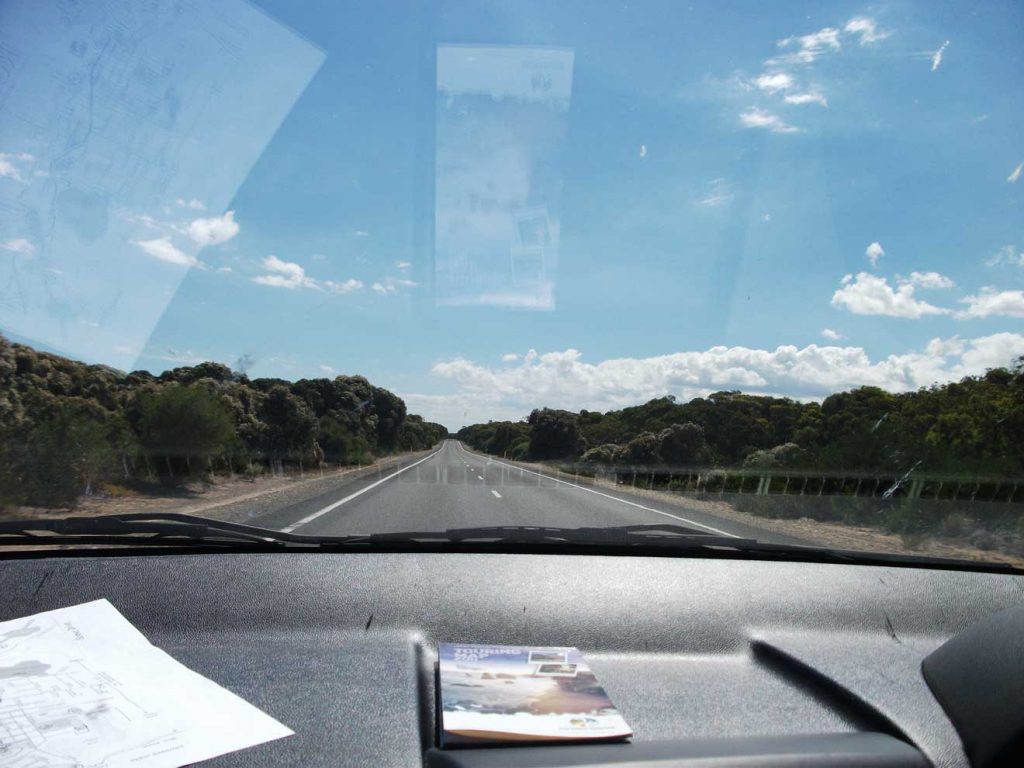 We passed through several small towns on the way to Robe. First we had stocked up on food at the nearest big town Warambool where we did a quick wander round but other than a big “Historic Village” which was rather expensive there didn’t appear to be much there. We did stop off at “Granny’s Grave” which is the burial site of the first White woman in the area but I’ll be honest we weren’t too impressed.

So forward we travel to Robe, driving pretty much non stop to get the 3hr journey out the way. We paused briefly at Portland for a map and a venture in a kiddies playground and then again just before the South Australian border to ditch any fruit we had since the state is a fruit quarantine area and if caught with anything there is a $5000 fine. We chose not to chance it with the border cops but as it turned our the quarantine checkpoints were closed. South Australia also has the added fun of the being in a different time zone which is half an hour behind Victoria so we have to change watches etc which would later confuse us greatly. On the home stretch to Robe its getting late but we see the most amazing sunset which seems like a perfect end to the drive but our hostel would have a nice surprise to add to our day.

Having simply picked stop overs based on the fact there was a hostel there we hadn’t done much research on where we were staying nor had we paid attention to the name of tonight’s lodgings- Lakehouse Manor. We arrived to find a fantastic mansion house where we were upgraded to the big room, which was clearly the family suite, for the sole reason  that we were Scottish. Upon exploring the expanse of the manor house we are thoroughly impressed with the place, complete with library and traditional kitchen.

Now by this point we have got quite attached to our little hire car which we named Kiwi on the first day (due to it’s metallic light green colour not it’s New Zealander accent) but on inspection we weren’t the only ones attached to Kiwi though for the bugs on the grill its in a much more physical sense.

Following our night in the mansion and having discovered that we have planned our arrival in Adelaide at the worst possible time – during a festival, on a holiday long weekend with the Adelaide cup on the Monday, so we have to make a detour. With this collection of events together it results in no beds in any hostels in Adelaide so we aim for Port Elliot just an hour away from the city.

First we do a little exploring in Robe where we see the “Doorway Rock”, the old gaol and the Obelisk which looks like a giant traffic cone. Apparently, just as a white structure ships got confused with sand dunes further round the coast so the red strips got added later to be distinctive.

From Robe we have another unending straight road in the intense heat on SA. Sadly more dead Roos on the road and were defiantly collecting more bugs in the front grill. In south Australia there is a rule of the roads that drivers must have there headlights on 24hrs a day which seems odd in such sunny conditions but turns out it makes it easier to see cars through the haze and helps you identify that they’re not just a mirage of the road.  Later on our drive not long after discussing how if you broke down here you would be completely stranded since you can drive for an hour and not see another car and that there is no signal, we pass a campervan that has managed to crash down a ditch into the bush. Luckily they had managed to acquire several utes but it makes us feel very ill-equipped to be driving though such nothingness.

Every so often we pass through a town and even meet Larry the giant lobster just outside Wellington.  Bagged another Big. We get some much needed petrol and later fill up again since lots of drive means lots of fuel it seems.

We get to Port Elliot in the early evening and are met by a very rude receptionist at our hostel who tells us we’re lucky to get a room even though we had bought and paid for one and she just didn’t check bookings.

We’ll figure out plans for onward travel soon and hopefully find a bed in Adelaide tomorrow when we return the Kiwi.