So our first night on Phillip Island we went to the biggest attraction on the island – the famous little penguins. It was rather cold sitting in the dark waiting for them to come ashore to their nests but they did eventually pop in to say hello and waddle up the beach despite the many groups of children who didn’t seem to understand the instruction to sit in silence. We sat for a while watching them come ashore before going up to the board walk area which is built over the nests and lets you stand mere inches from them. Sadly, the rules are no photos because you might scare the penguins with the flashes but the whole place is light up with spotlights anyway and these bird seem in no way scared of the presence of large groups of people and screaming children. We definitely enjoyed the penguins but had to leave a little sooner that we would have liked to get our group taxi back to our accommodation.

Where we were staying was a little odd as it was a caravan park which had a small hostel attached. They only had dorm rooms and even though they were advertised as mixed we were separated into male and female dorms. As it turned out breakfast was actually included in the price but no one told us and so we were eating our rubbishy cornflakes while there was plenty of fruit and other goodies free for us. 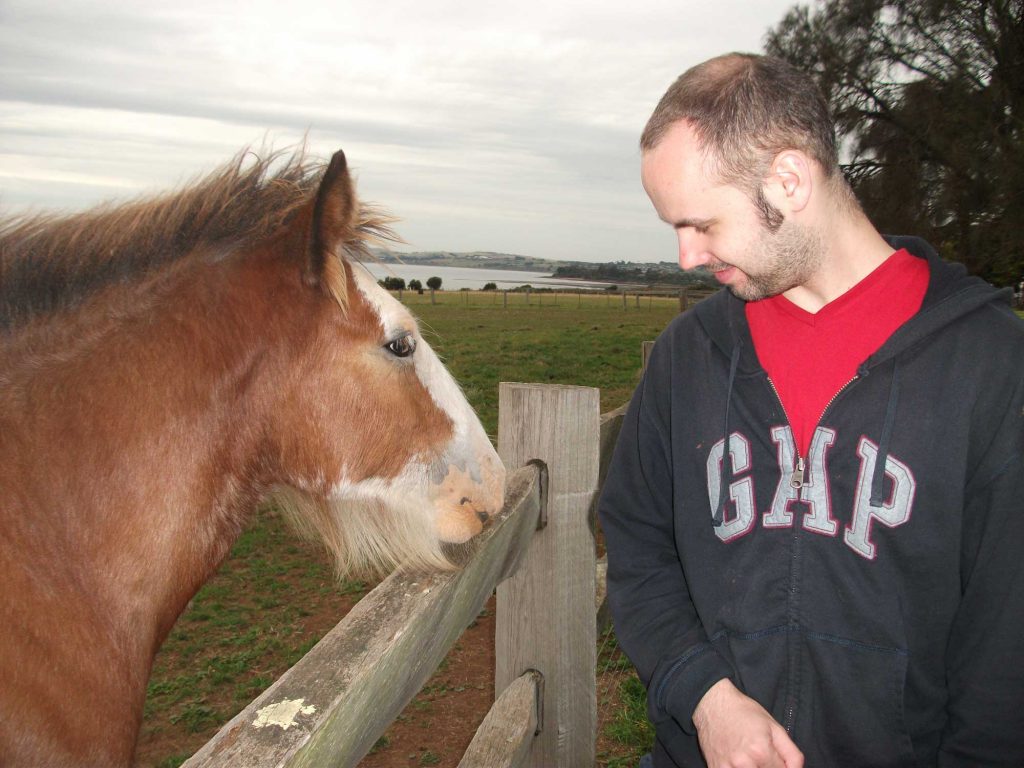 After quickly learning it was rather difficult to explore the island without our own wheels we opted to hire a care for the day from Cowes; the main town on Phillip Island.  So as well as the big attraction of the penguin parade, our Phillip Island Nature Parks Ticket we had purchased gave us access to the Koala Conservation Centre where we had to test our animal spotting skills and then Churchill Island Heritage Farm. So for the later we headed to the island located just off the island to see if there was anything interesting to see.

Churchill Farm isn’t a particularly big place but we wandered about some old farm buildings and houses and read a little history of the place. There was plenty of animals wandering about including a few Clydesdale horses and I even got Andrew to reluctantly talk to a pony and feed it some grass but after that we had done everything there was to do.

From here we drove down to Nobbies Point, a very pretty coastal headlands, to try and spot some seals but they seemed to be hiding from us but on walking round the coast a little we found some other wildlife instead….more penguins, Hiding under the boardwalks, these little guys seemed unfazed by visitors and this time there were no restrictions on photos so we sneaked a few (while keeping a safe distance). Plenty of little fluffy babied either hiding in nests or hanging out under the walkways.

Back at base we spent a lot of time getting quotes from rental places in order to hire a car from Melbourne for our next stretch. In hindsight we should really just hired a car from Melbourne before Phillip Island and driven here with it as there is next to no public transport on the island and the main transport option are the rather pricey island taxis.

Phillip Island was quite nice and we enjoyed our close encounters with the penguins but unfortunately it will also be memorable for Andrew for other reasons as he ended up being attacked by a plague of ants while sleeping and was covered in bites up is legs and all over his feet!

Have you ever got the chance to see penguins in the wild?