Macedonia wasn’t really on our radar before our recent visit but after a short break in the beautiful city of Ohrid it’s certainly a spot we’d recommend to others.  Macedonia, also sometimes referred to as the Former Yugoslavic Republic or Macedonia (FYROM)*, is a southern Balkan country bordering Albania Bulgaria, Kosovo, Serbia and Greece.

While Macedonia is a landlocked country, it holds the wonderful gem of Lake Ohrid. Not only one of Europe’s oldest and deepest lakes but a UNESCO World Heritage site which extends to the city of Ohrid too. Split between Albania and Macedonia, we chose to visit the largest city around Lake Ohrid the Macedonian city of Ohrid. This beautiful spot is becoming increasingly popular as budget airlines such as Wizz Air have begun a regular service flying direct to the local Ohrid Airport – St Paul the Apostle, rather than the capital of Skopje which is three hours’ drive away.

So what is on offer in the city known as the “Jewel of the Balkans”? Here’s just some the things to see and do in Ohrid, Macedonia.

Sveti Jovan of Kaneo / The Church of St John

Ohrid is all about churches and it is often quoted that the city once had 365 places of worship and so a different church for every day of the year. We didn’t manage to visit quite that many but we did certainly see plenty of these beautiful buildings. This particular spot, The Church of St John at Kaneo, is one of the most famous and most photographed places in all of Macedonia – I’m sure you can all see why! You simply cannot visit Lake Ohrid and not take a few (hundred) shots of this beautiful building and its amazing background. 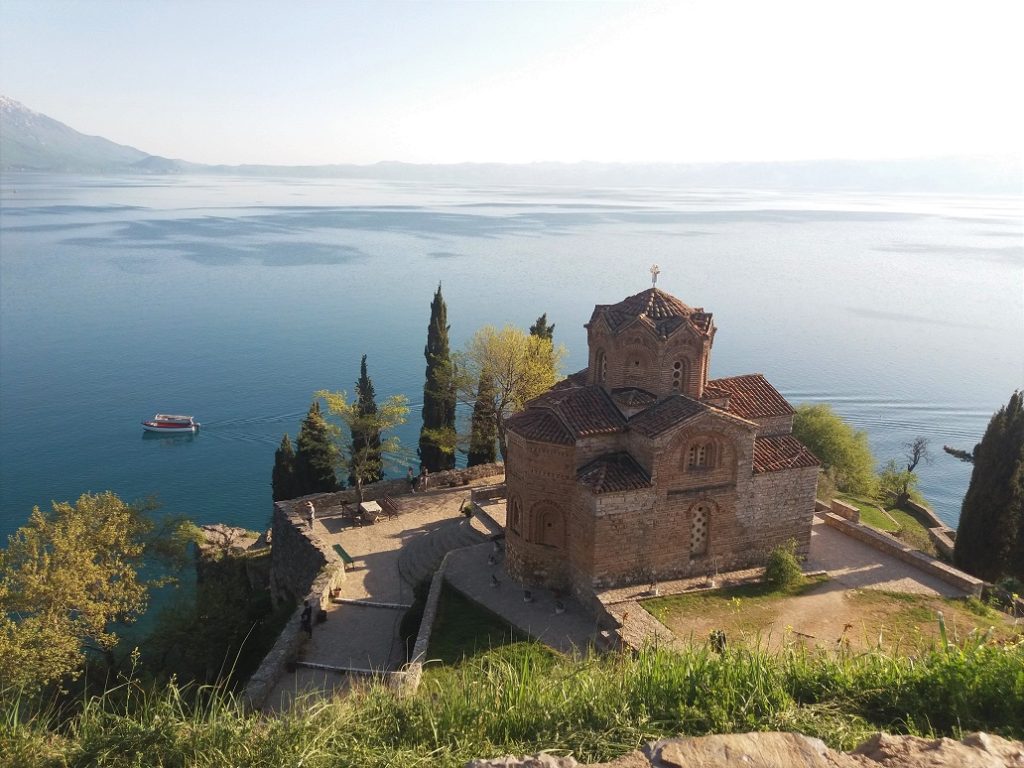 There are several options to walk to the church and to the various viewing points around it. Either up through Ohrid’s old town and approaching from the hill or along the water front which really is the WATER front as a large section of this is along a boardwalk over the lake. Beautiful when quiet, a little scary when busy as there are no rails. The grounds and paths around St John are free to explore and just one of the lovely things to do in Ohrid. You are also welcome to take photographs from the outside but as with most churches we visited in Ohrid, no cameras are allowed inside.

If you head to Lake Ohrid in off season you’re more likely to get some empty shots but if you’re planning the summer months then you’ll need an early morning excursion to beat the crowds. Entry to the Church of St John at Kaneo is 100 Denars per adult. 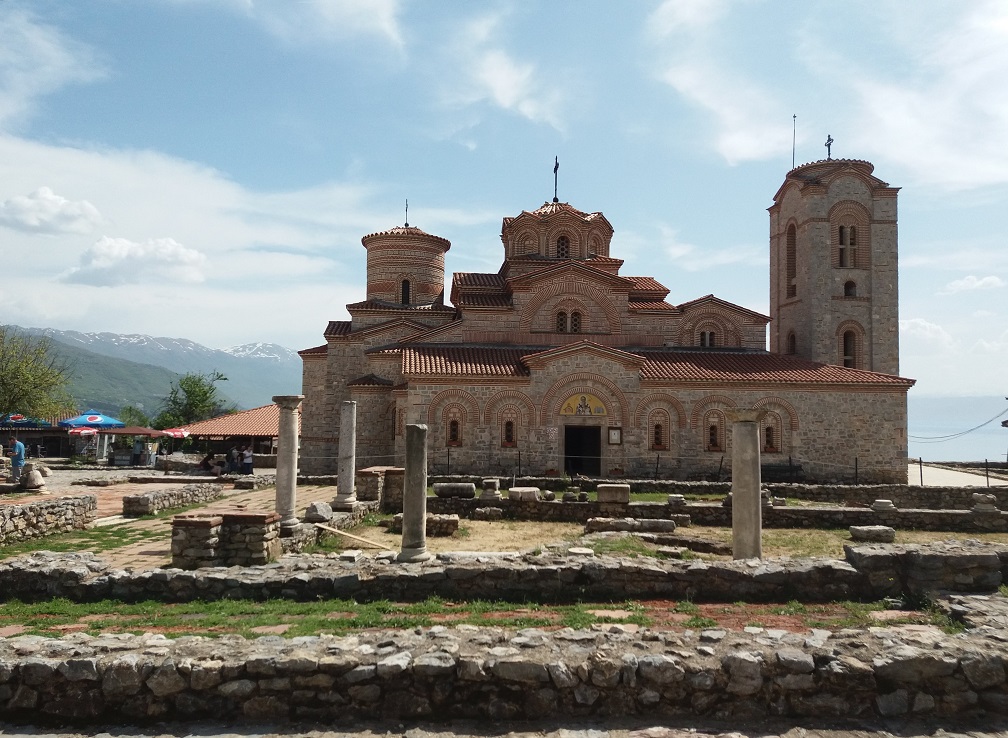 Speaking of all those churches Sveti Kliment or St Clements is another spot to explore. Located on Plaosnik (Plaošnik) Hill in Ohrid this site is based on the spot where the Cyrillic alphabet was first created. You can also visit the tomb of the Saint after whom the church is named and walk though the ancient Roman church buildings, known as basilica, which are partly excavated.

While it’s another beautiful building, sadly the picturesque surrounds have been lost somewhat in recent years as hotel complexes have been built around and even over the site. During our visit, construction work was in full swing so we couldn’t get the beautiful panoramic images that once were possible although once the new hotels are up I imagine their balconies and rooftops might be prime photography spots.

Unlike most of the other churches and monasteries around Ohrid, Macedonia, which only request an entry fee for access to the building, St Clements requires an entry fee of 100 Denars for entry to the church grounds. Look for the gates and follow the path round to the right to find the access point between to new build hotels.

It should be noted that there is also a”Church of St Clements of Ohrid” within Macedonia’s capital, Skopje, which is also one of the top things to do in Macedonia but these are very different churches so try not to get them confused. Both are named after the Saint who was based in Ohrid but the church within Ohrid itself is where the Saint’s tomb still remains.

Ohrid has a lot of influences from the Bulgarian and Ottoman Empires but one of the city’s ancient sites is in fact Roman. 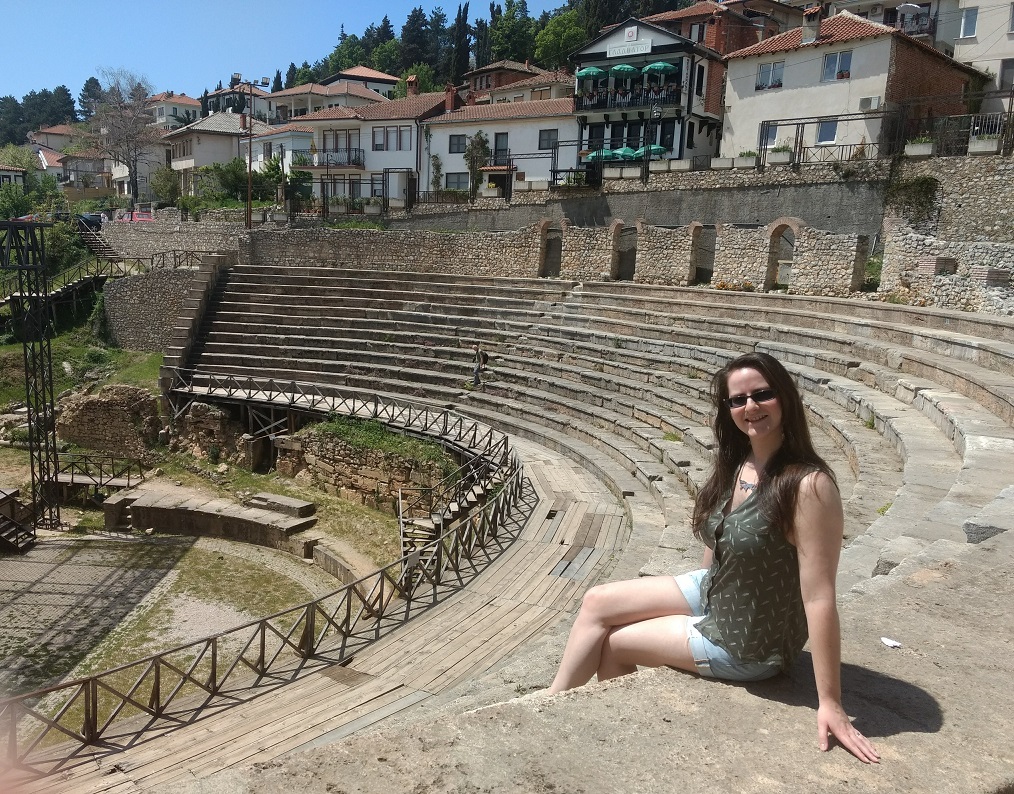 Dating back to 200BC, the Ancient Theatre of Ohrid is an impressive structure and it’s amazing to get the sense of history connected with these ancient stone steps. The site is now used as a concert venue and so is still in use today although the only gladiators you’ll see here are the local cafes keen to cash in on the tourist attraction. Watch out for the wooden stairs and platforms which are not in the best shape but make sure to explore both the seating and the stage to get the scale of this site. It’s also worth noting it is a bit of a walk uphill to the theatre and there is no shade once there so make sure to take it slow.

The Ancient Theatre of Ohrid is free to explore. 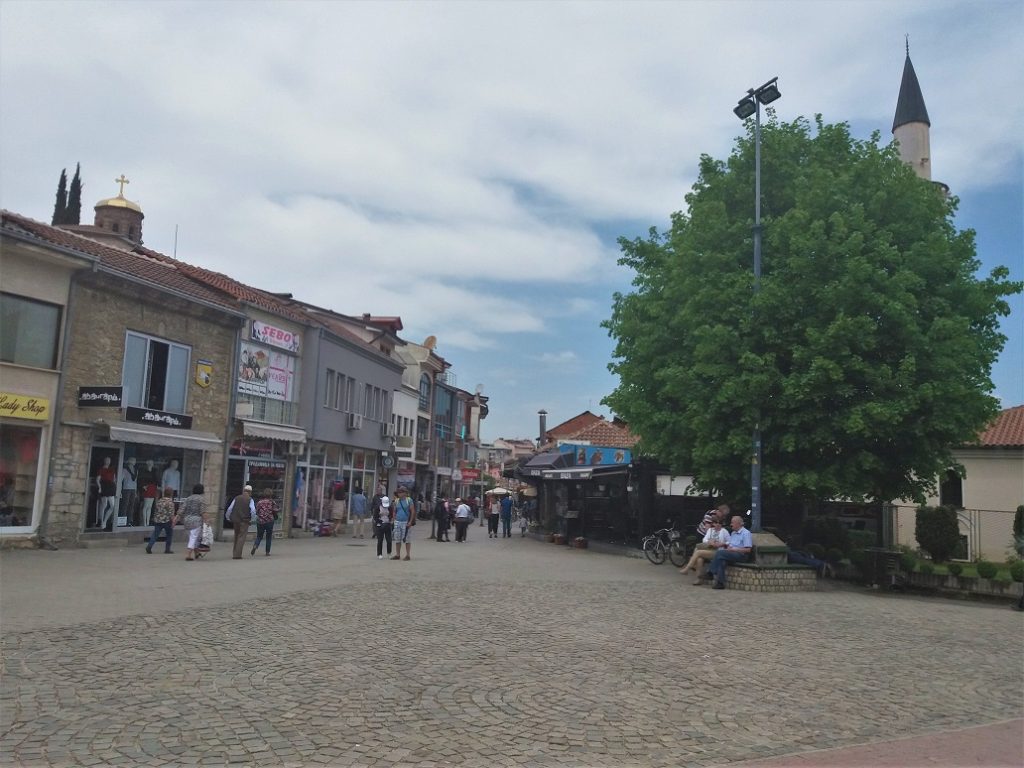 Ohrid is also a prime shopping spot with Ohrid pearls the item of choice here and so you will find a lot of jewelry stores selling beautiful necklaces and bracelets all gleaming with the local pearls. While we’re not really ones for retail therapy, those who are can explore lots of little boutiques along the main streets of St Clement of Ohrid and Goce Delchev. If like us you’re more into sight seeing than shopping then things to look out for at the main bazaar square are the minaret from Halveti Hayati Tekke Mosque and also the famous Ali Pasha Mosque domes. Unfortunately, Ali Pasha was undergoing some major renovations while we were there so we didn’t get to see the unique architecture.

The Chinar or Plane tree is also a key spot in the centre of the square. Often surrounded by little stalls you might walk right past it but the ancient tree is at least 900 years old!

CONSIDERING OTHER BALKAN COUNTRIES?- A Quick Guide to Montenegro

Enjoy food in the square or the waterfront

If you haven’t been tempted by the retail outlets then maybe the bars, cafes and restaurants might be more your liking. Week days are generally quieter in Ohrid but when the weekend hits, City Square will certainly be mobbed. Most locals seem to plonk themselves in a cafe or restaurant for most of the day so if you want a good spot for lunch you’ll need to get there early and maybe be prepared to wait a bit longer for service. 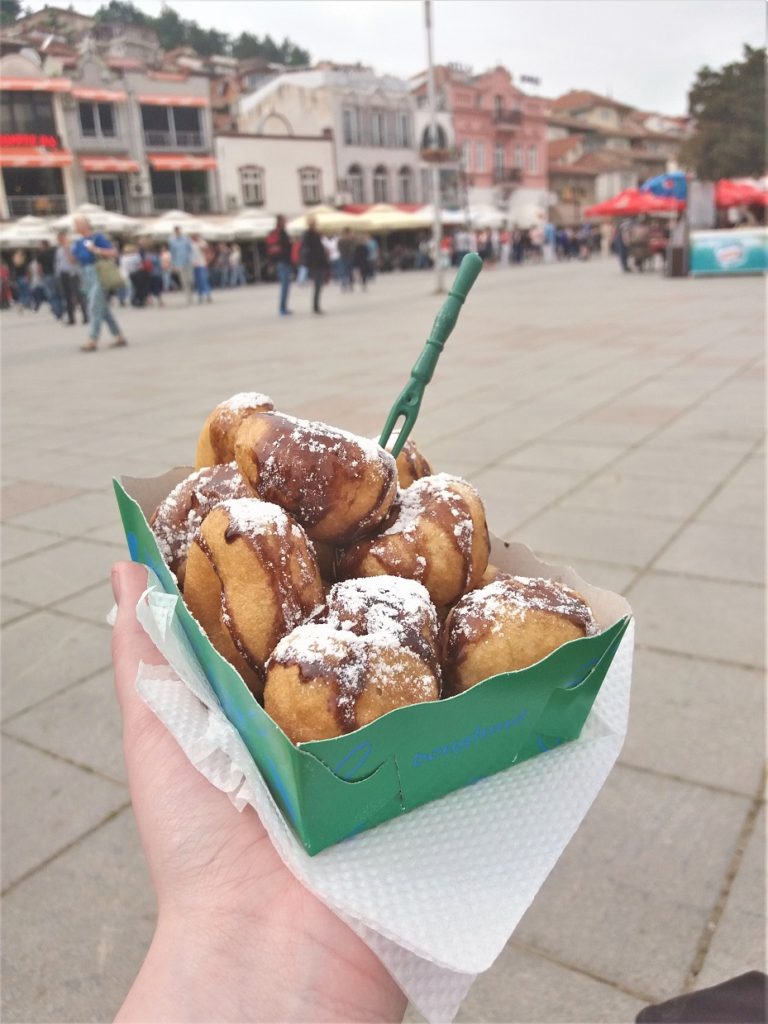 Places closer to the front will be more expensive than those further in town but in general meals are not particularly expensive in Ohird. A dinner for two with drinks in a restaurant cost us 600 Denars or approx £8 | €9 | $12.

Snacks and ice creams around the square are also a popular treat so look out for the gelato shops dotted around the adjacent streets or you can try some Macedonian donuts from the street stalls. For a large portion of donuts in the square we paid 50 Denars or £0.70 | €0.80 | $0.95 (As of April 2018). 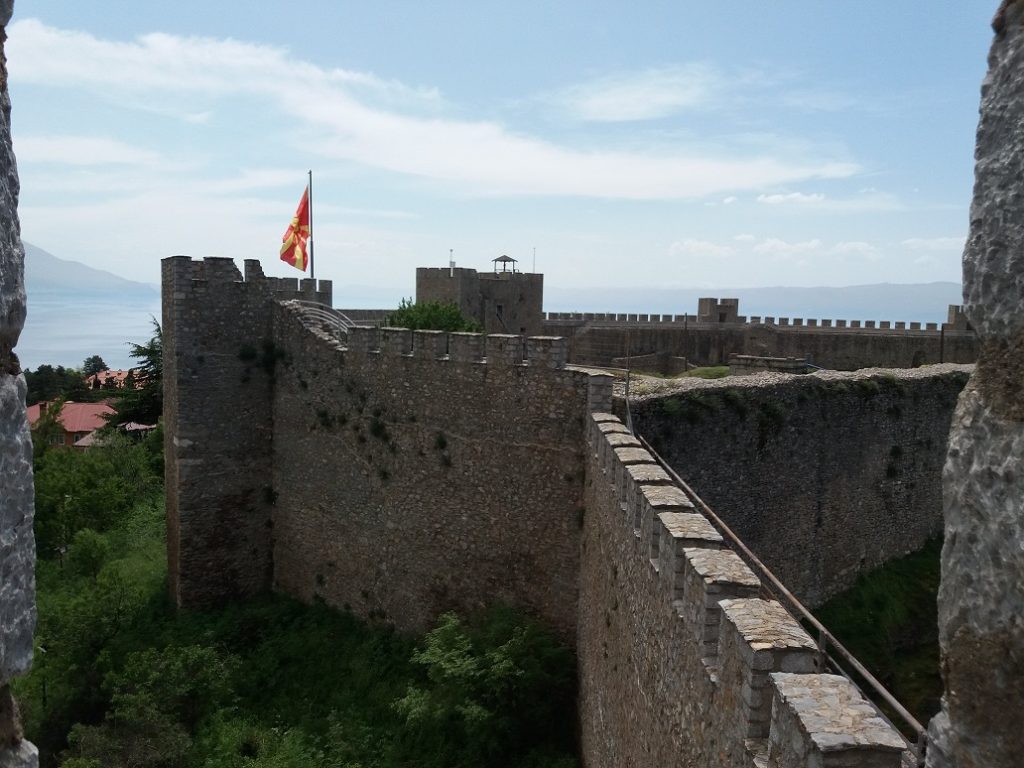 Our absolute favourite spot of our trip was Samuel’s Fortress and is certainly something you should have on your list when considering things to do in Ohrid. While it does take a bit of a hike to get up the hill, the amazing views over Lake Ohrid and the city are well worth it! We loved exploring all the different levels of the fortress and as well as just gawping at the beautiful views.

Sadly, there is no information on site to read about the history of the site so have a wee read up before you go so you can appreciate the site a little more. Also watch out for very steep stairs in places and some low barriers along the ledges.

Entry to Samuel’s Fortress is 60 Denars per adult. 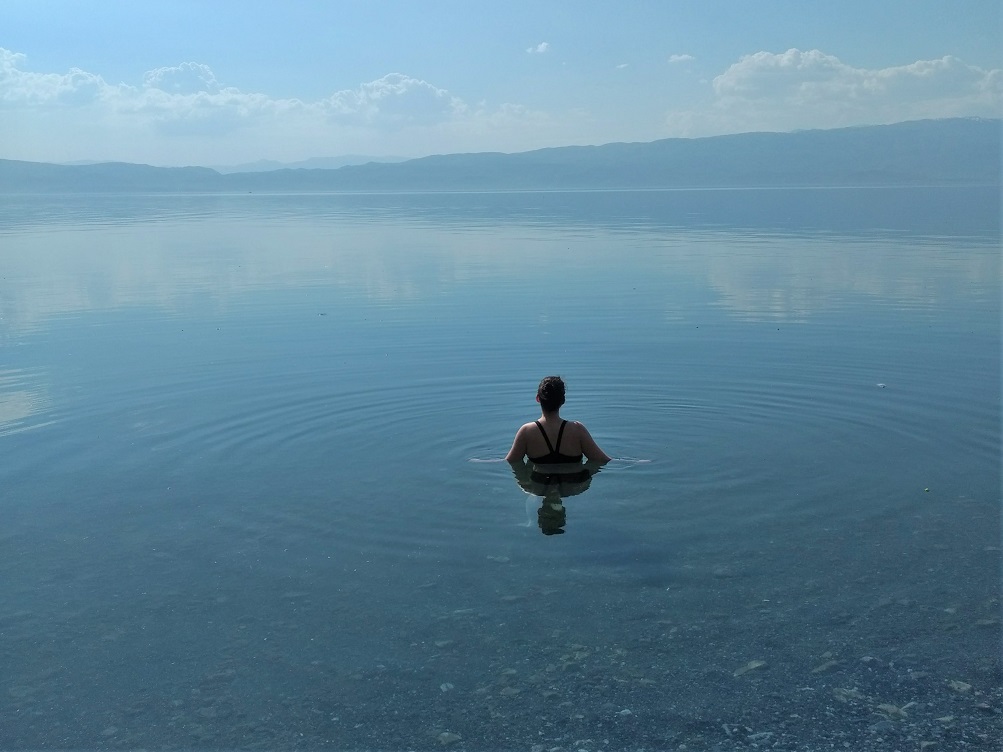 Of course you’ve come to the beautiful Lake Ohrid, you need to actually spend some time in and around this beautiful water body. Lake Ohrid is strikingly clear and there are plenty of spots to enjoy the waters edge. If you want to get out on the water there are plenty of small boats ready to take you out for sight seeing trips including past Sveti Jovan to get some beautiful shots from the water. Captains typically line the waterfront in Ohrid town and will try to entice you in for 30 minutes to 60 minute for around €5 -10. If you want to get in for a swim  the main beach in town is Potpesh but it is very little and primarily cobble. If you’re really looking for more of a beach day, nearby locations include Gorcia or Trpejca further round the lakeside . We headed to the small and secluded beach at Gorcia Inex which was a 45 minute walk but a nice spot to enjoy the water and watch the occasional boat trip go by. 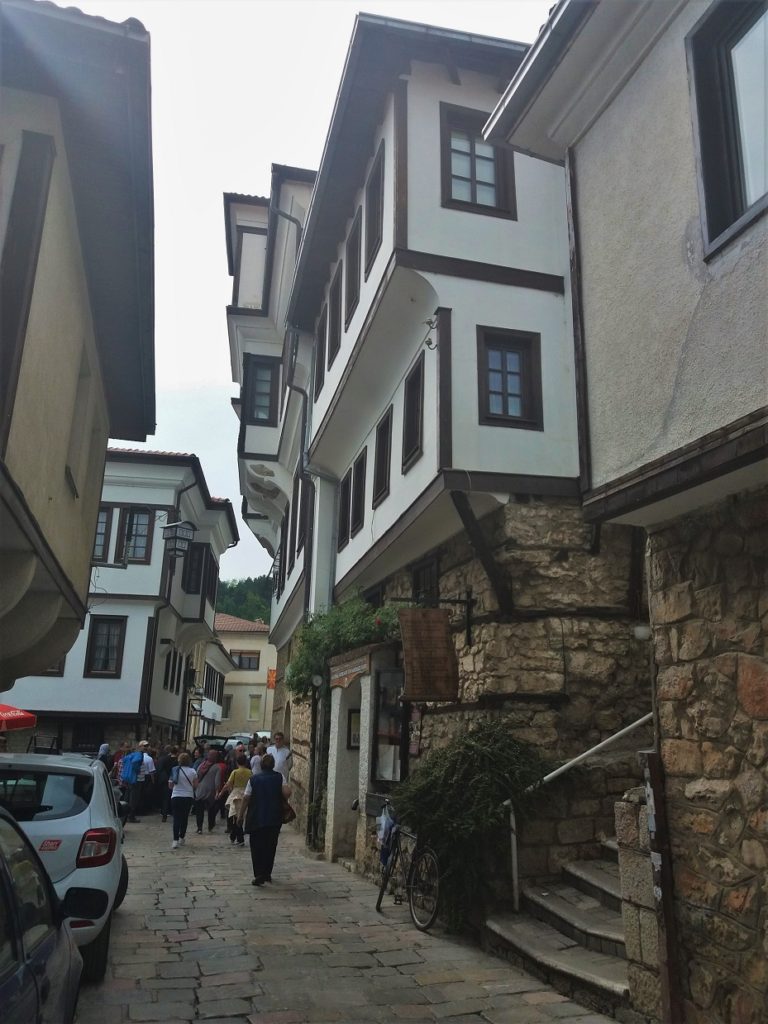 The House of Robevci (also Robeci) is a great example of 19th century local architecture and a perfect full size version of the beautiful streetlamp models you will see lining roads and paths throughout Ohrid.

If you’re looking for more of the cultural history of Macedonia and some exhibits on the history of Ohrid head inside to the National Museum. There is also a large display on the Robevci family themselves including many of their belongings and items from the house. Entry is 100 Denars.

You might also want to stop next door at the National Workshop for Handmade Paper for those that fancy something a little different. 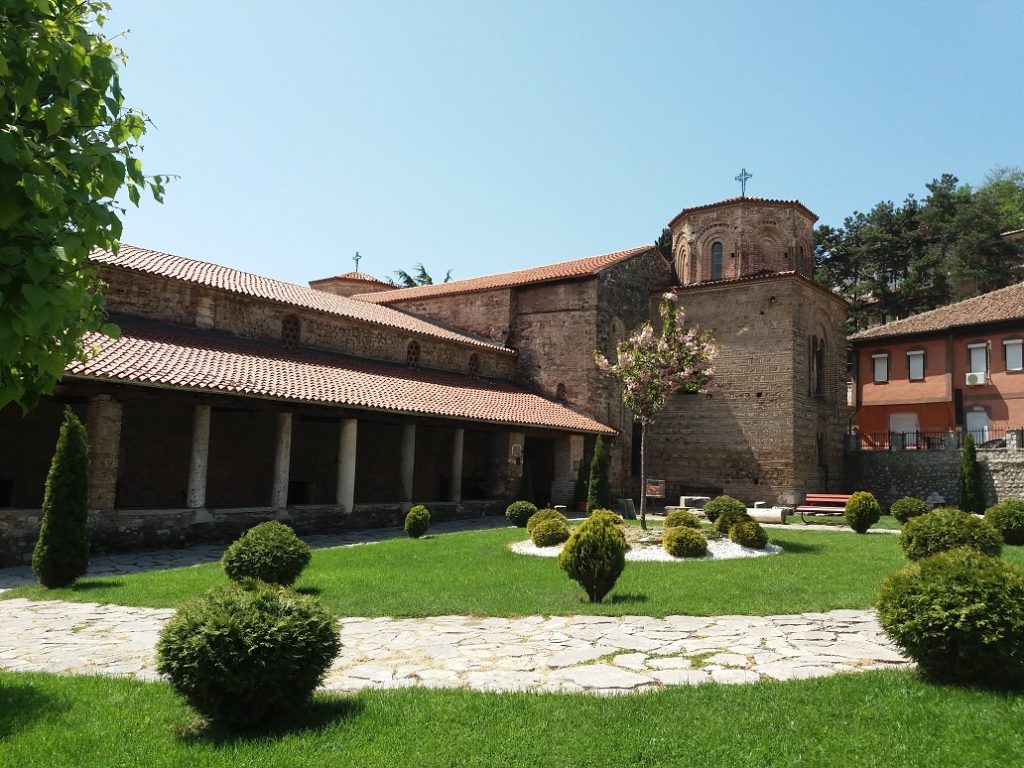 Another beautiful location is the Church of St Sophia. Surrounded by a manicured garden, this is another lovely place to just sit peacefully and enjoy some sunshine.  In addition to the beautiful exteriors, St Sophia also houses some impressive frescos which date back to the 11th century and are said to be some of the finest examples of medieval artworks in Macedonia. I’m afraid you’ll need to take a trip yourself to see them though as similar to elsewhere in Ohrid and beyond, no photography is permitted inside.

Free to wander but 100 Denars to enter.

Is Lake Ohrid or Ohrid city on your travel list? 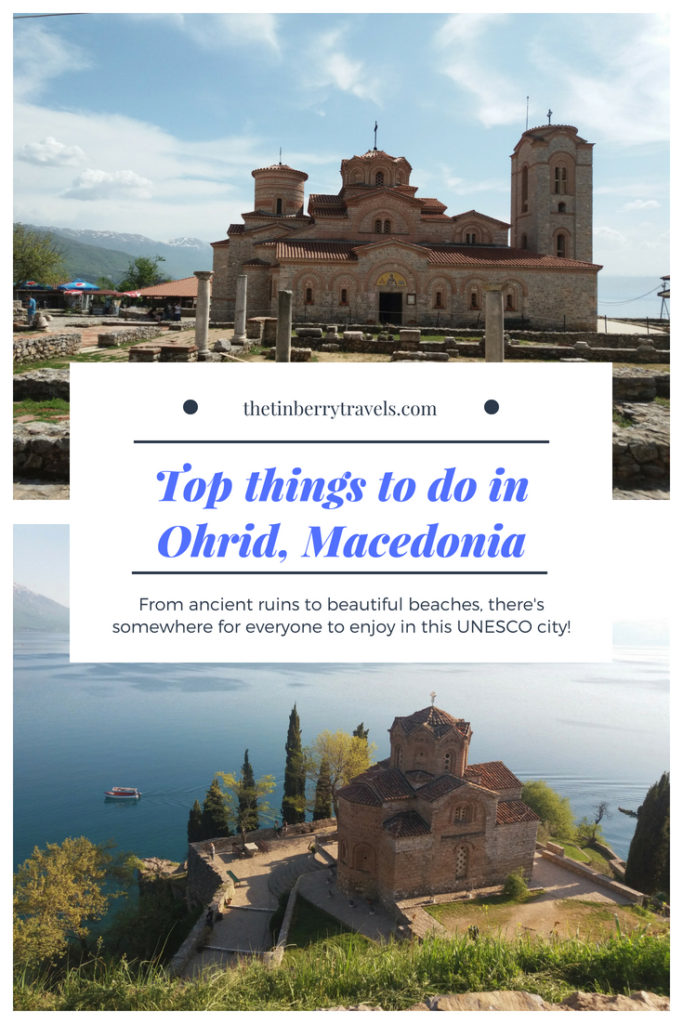 * DISCLAIMER: I am aware that “Macedonia” is a contested name for this country and in other places you may see this area of the world noted under different nomenclature including Former Yugoslavic Republic of Macedonia (FYROM) or simply Republic of Macedonia among others that do not use Macedonia at all. I have chosen to clarify my location followed by simply the term “Macedonia” thereafter as this is the name used by locals in the region and is the name recognised by my own country. While politics does often affect travel I try my best to make this blog free from political content therefore politically motivated or abusive comments will not be allowed on this post.