I love solo travelling. I get to pick where I’m going and what I’m doing without compromise and without argument. I find being a solo traveller gives me the ultimate sense of freedom and it is something even with a lovely other half( and now husband), I’ve still not really given up. But, as with all things, there are still a few downside to travelling alone.

Here’s six scary moments I’ve had as a solo traveller.

While travelling solo I have typically always stayed in hostels as they are usually the cheapest way to travel bar couchsurfing or workaway style options. On the downside, you don’t get to pick who you’re sharing you’re room with. Usually it’s fine, you talk to the people you want to and you can generally avoid the ones you don’t. While I’ve experienced plenty of noisy night with alarms, drunken chats and …other things, the scariest hostel stay I’ve ever had was in Tamworth, Australia.

Firstly, the room itself was horrifically cramped with 5 bunks in the room. The beds were so close together that you had to turn side ways to shuffle in or crawl through the end if you were bottom bunk like me. The bed next to me, which was pretty much conjoined, housed a guy who was there on a bit more of a long term basis and so had set up home in his little corner.  As well as wedging a pole between the bunks and hanging his shirts on them he had managed to get a little side table in between too. And what was on the side table you ask? Well, a lovely picture of dogs playing poker and … a big knife. Not a little penknife or Swiss army knife but a crocodile Dundee type knife! And where did this guy work? The local slaughterhouse. Creepy, creepy and extra creepy. I only had to spend on night in that hostel room but one was certainly enough.

Now I’m aware this one will be controversial… but I didn’t like San Francisco. It is the only place that I have ever felt truly unsafe in while travelling and point blank refused to go out at night.  I know it seems crazy because everyone else loves the place!

When I first arrived in San Francisco the first thing I was struck by was just how many homeless people there were on the street. Even on just the five minute walk from the station to my hostel there must have been about ten people lying across the pavements in various states of intoxication. It was not what I was expecting at all.

Due to public transport strikes I had to get one of those hop-on hop-off buses in San Francisco  but even getting off at just the tourist spots seemed to be horrid. At one of the view points for the Golden Gate Bridge, I just couldn’t get over the smell of urine and litter everywhere and at the famous Painted Ladies, I had stopped for only a minute before I realised that all the cars around me had been broken into so I swiftly got back on the next bus.

I think the most horrifying point however was in the middle of the night when I was woken up by a man screaming in the street. Shouting and crying about what his life had become, that he was a Vietnam vet and that no one would help him because now he was just a drunk on the street. It was soul destroying to hear him and something that will probably never leave me.

I feel like I must have visited a different San Francisco from everyone else. During my time there I struggled with the sheer numbers of homeless people who were all very visible at all the tourist spots, I was knocked against a wall and offered drugs and I found many places quite dirty and with hostile atmospheres. It seems so opposite to what other bloggers have experienced but having been twice now I’m sure I wouldn’t want to give it another try as a solo traveller. Sorry guys.

I love to hike. I quite happily disappear off with my lunch and am gone for a day trekking about on my own.  Now when going off on your own for several hours you should really tell people where you’re going and when you plan to be back but there’s not always someone to tell when you’re solo travelling. However, a wake-up call to how important this can be came when I was off wandering along a coastal woodland path near Agnes Water in Australia. An hour or two in and I manage to stand on a brown snake perfectly camouflaged against the forest floor! Luckily, the thing got as much of a fright as me and disappeared off in the other direction rather than attack but the panic at the time was very real.  I instantly checked my phone and was of course out of signal. I checked and rechecked my bare legs in case I was too in shock to feel a bite but everything was okay. Once I had continued on and calmed down a little I began to realise that I could have easily been bitten, been in need of medical attention and had no way to call for help. A very scary thought!

My encounter with the snake at Agnes Water was not my only scary wildlife moment in Australia. While working in Cairns at Cairns Tropical Zoo,  I spent my days off doing local day trips including one out to Kuranda. There’s lots of places to go wandering around Kuranda including along Jumrum Creek. It’s a lovely spot next to the water; just don’t get too close. As I blissfully walked along enjoying the view there’s nothing like a splash to bring you back to Earth and realise where you are. The splash in question which made me burl around was a large crocodile tail disappearing into the water behind me. Wildlife encounters can be exciting but we you realise that Mr Crocodile could probably have eaten me is not so fun. This time there were other people around and in fact little tour boats just up the river which actually take people out on the water to get a close up view of the reptiles. Moral of the story, be aware of your surroundings, idyllic spots can still have hidden dangers.

I don’t mind flying. I’d never think twice about booking a flight but that doesn’t mean I’ve not have the odd bumpy flight. One very scary hop was on my outgoing trip to Jersey. I was off to spend 3 months working in the Channel Islands for a conservation organisation on Jersey but travelling in January from Glasgow meant no direct flights.

On the day in question the weather was atrocious and here in Scotland we were experiencing gale force winds. As you’d probably expect, this was not ideal take off weather and so it was a rocky start. The thing is, once airborne, it only got worse and the closer we got to my transfer airport of Southampton the bumpier it got. As the plane not only rocked side to side and “bumped” along there was also points where the plane seemed to freefall in the sky causing everyone’s stomach to jump. At times like these you really want someone next to you with a hand to hold or at least a sarcastic comment on dodgy pilots to help take your mind off it. In the end the landing was the worst I’ve ever experienced as the pilot clearly struggled to land the plane without veering off into the wind.

Luckily for everyone else they were home, off for a nice rest and recovery. Me? I had about 50mins to get over that flight before having to get on an even smaller plane with little propellers to take me to Jersey.  Thankfully, the second flight wasn’t as bad but the first will stick with me for a long time!

My final week of a USA tour, like many people, I choose to end with New York. Now I love NYC. I found it exciting and fascinating to wander round and had no issues with the city itself though I am well aware I only really experienced tourist Manhattan.

Now while my experience of New York was great, my accommodation was not.  My hostel was on the Upper West Side and it had a good breakfast, nice location next to the park and a handy subway station but there one or two downsides. To start, they had assigned beds and someone had nicked mine before I arrived and despite staff’s claims to have moved the person out, changed bed linen and fixed the problem I still got a fist in the face at 2am by a drunken guy clambering into “his” bed. And no, that’s not the scary part.

The scary part was the Hostel Manager who had helped “fix” said problem and then helpfully carried my backpack up to the room on the first day. To start with he was a little overly friendly but after a day or too he was really making my stay uncomfortable.

After bumping into him several times at the hostel and each time getting a creepy invite to dinner or of sightseeing, I even, to my horror, walked in on him doing push ups in the laundry room which I’m convinced was a nasty ploy to try and impress hostel-goers. While the advances were creepy and made me not want to send any time in my hostel the fact this guy had access to all my details as well as knowing where I was sleeping really kinda scared me. I definitely wanted to move accommodation but NYC is not a walk up kind of place when it comes to hostels.  I just had to grin and bear it but it really was one of the most horrid situations I’ve been in.

So is solo travelling scary?

There will always be scary times when travelling to new places or in different situations but these have never put me off solo travel. I still fly, I still go wilderness wanders and I still book accommodation solo. Lots of people ask “Are you not afraid travelling as a girl on your own?” and about 99% of the time it’s a big no. I love exploring, I love finding new places, meeting people and finding new things to do and that will never be changed by just a few scary moments. I learn from each mistake and become a better traveller for it!

What are your scary moments when travelling? Feel free to share them in the comments. 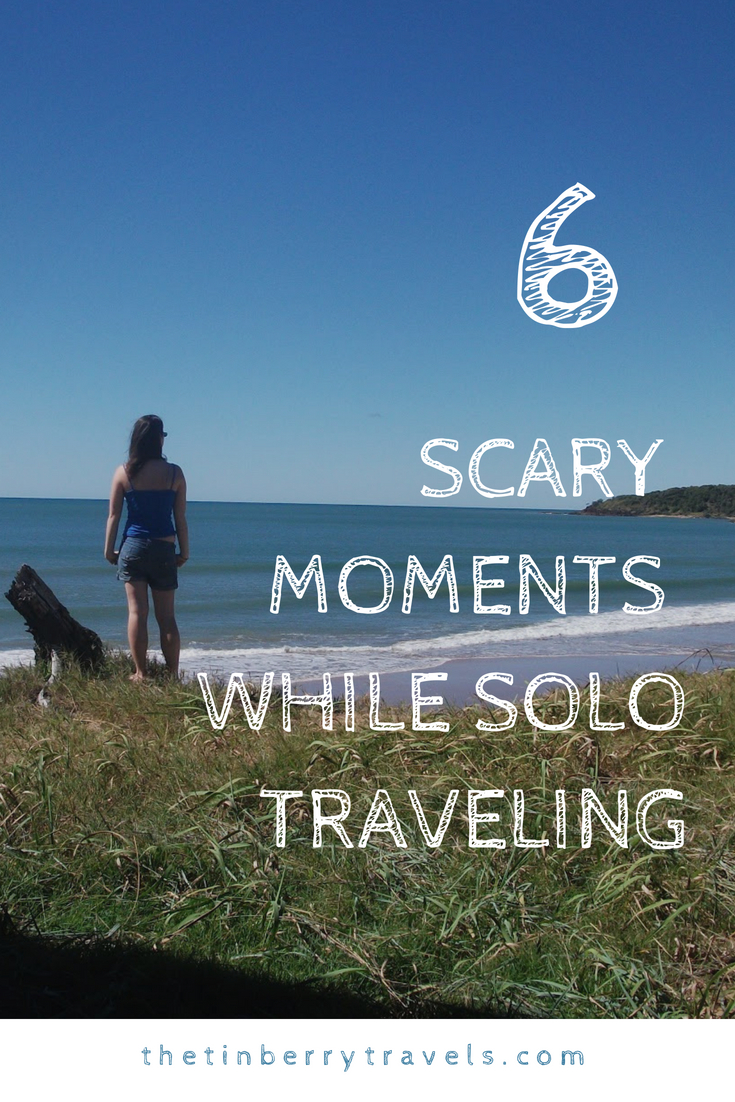