Scotland is a fantastic place for museum buffs and no matter which city you’re in you’ll find plenty of history and heritage locations to fill your days. If you’re looking for an added behind the scenes element to a trip to Scotland’s capital organising a tour at the the National Museums Collection Centre at Granton in Edinburgh might just be your cup of tea!

I first heard of this opportunity while at university in Edinburgh from one of my course lectures who spoke incredibly highly of this sneak peek tour of the off-show exhibits so with plenty of recommendations I had to head along to check out what the National Museums had to offer. 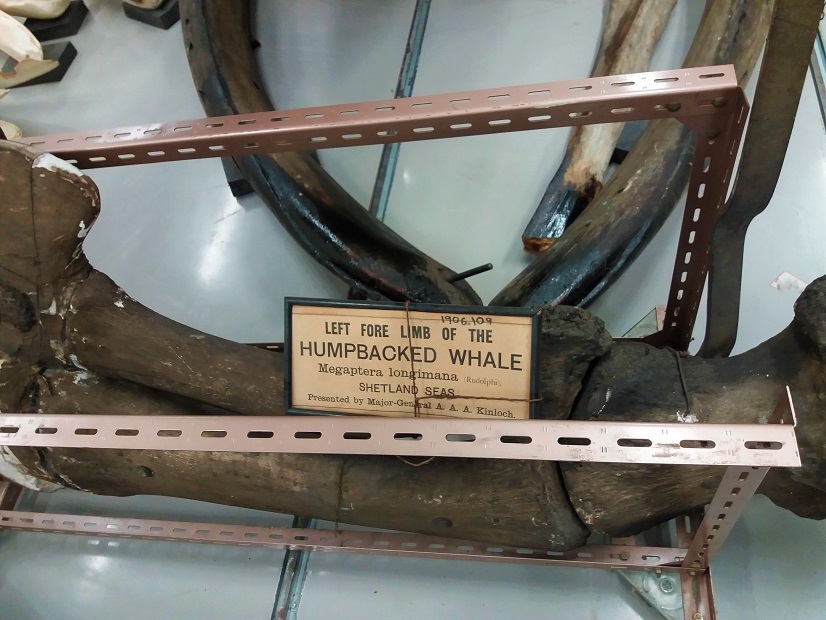 Getting to the National Museums Collection Centre in Edinburgh

While the National Museums themselves are dotted about a little, the collection centre is located in the Granton area of Edinburgh. While this isn’t in the city centre it is easily navigated to using the city bus system.

I travelled through from Glasgow by bus so arrived at Edinburgh Bus Station next to St Andrew’s Square from which a short two minute walk will get you to Broughton Street and a number 8 Lothian bus will transport you to a stop right outside the centre’s door. From Broughton Street the journey takes about 20 minutes but does go right along West Granton Road where the museum is located so it’s easy to spot your stopping point.

There are also a number of buses that run from the West end of Prince Street such as the X37 or 19 Lothian buses but Traveline Scotland or Google can help if you’re coming from somewhere else.

If you’re driving, there is no parking at the collection centre but on-street parking on adjacent roads is pretty plentiful.

On arrival you will need to be buzzed in through the security gate which is right at the entrance and then give your details to the security guards at the reception window once in the building.

Our experience at the Collection Centre in Granton

I headed along to the November tour which included a visit to the transport section and a collection of  photography pieces both from the Science and Technology stores and a look behind the scenes at some to the National Science specimens.  Each department was located in a separate building within the National Museums Collection Centre campus but journey’s between different units only takes a minute or two but it is open air so if it’s heavy rain you might want an umbrella or rain jacket to hand. Each building is opened specifically for the tour so you really do feel like you are getting to peer into the hidden work of researchers and museum curators when you wander through the store rooms.

The Science and Technology curation section covers a large array of things and we were able to see two very different sides of the collection. First, we explored one of the smaller collections in the National Museums stocks but with some amazing unique pieces – the transport section. We were lucky enough to be shown around the vehicles by the Principal Curator of Transport and so we got the chance to hear quite in-depth histories of some of the cars, carriages and steam engines in the collection. 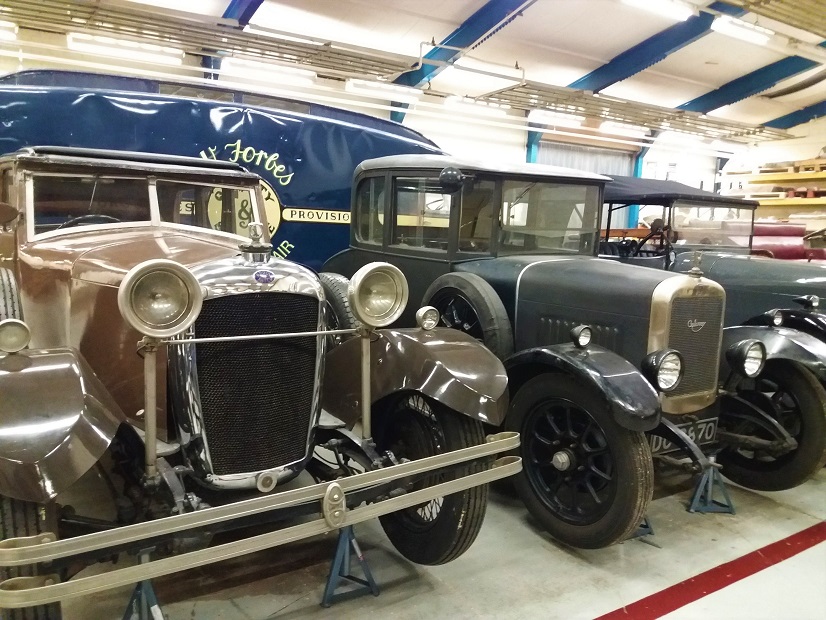 Ranging from horse drawn vehicles to concept cars and some of the first electric powered, cars there are some interesting stories behind a lot of the pieces in the museum’s collection. Some items had been used in film in the past, some where factory originals and many had been donated over the years from private collections. Even if you’re not keen on finding out about the intricate restoration work that takes place in the transport department you can just enjoy the pretty old cars.

After lots of time with the shiny classic cars, our tour moved building and on to cover early photography equipment and printing. This portion of the tour ended up with a little added bonus in terms of location. As the usual spot was not available, we actually ended up in the large items shed which houses everything and anything form all section of the museum collections that are simply too big to be stored elsewhere. Think the over-sized book shelf in the library but with museum artifacts! 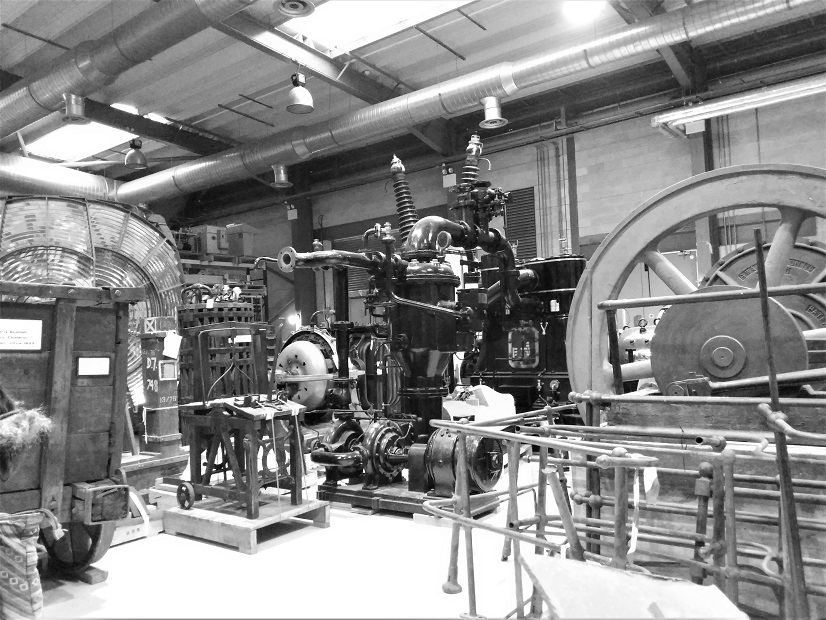 From our spot in the centre there were large industrial pieces such as belt drives and crane like structures and various mechanical pieces I won’t even guess at naming but I even spotted a lighthouse lantern among the chaos. As well as gawping at the many mechanical wonders that surrounded us we also found the photography equipment mesmorising. When you think how easily we pull out our phones to take a quick snap it’s quite the comparison to long exposure chemical reactions on cooper plates. Amazing to think how far we’ve come in such a short time!

Behind the Scenes of the Natural Sciences Exhibits

This was the section of we were most looking forward to on our National Museums Collection Centre tour. Visiting the array of specimens in the natural history collection is an odd mix of sadness and awe. The story behind the procurement of many of these creatures is of course a sad one, and the likelihood is that there may be the odd artifact that is now a relics of an extinct species. But history just oozes from the zoology collections – literally in the case of the whale bones. If you end up on a tour which include the whale skulls and skeletons you won’t be able to miss the “interesting” smell of the room. Not from decay or muskiness but oil, the substance that allows whales to survive in the high pressures of the deep sea (and also made them a valuable catch) and which still seeps from the bones even 100 years after they were acquired. 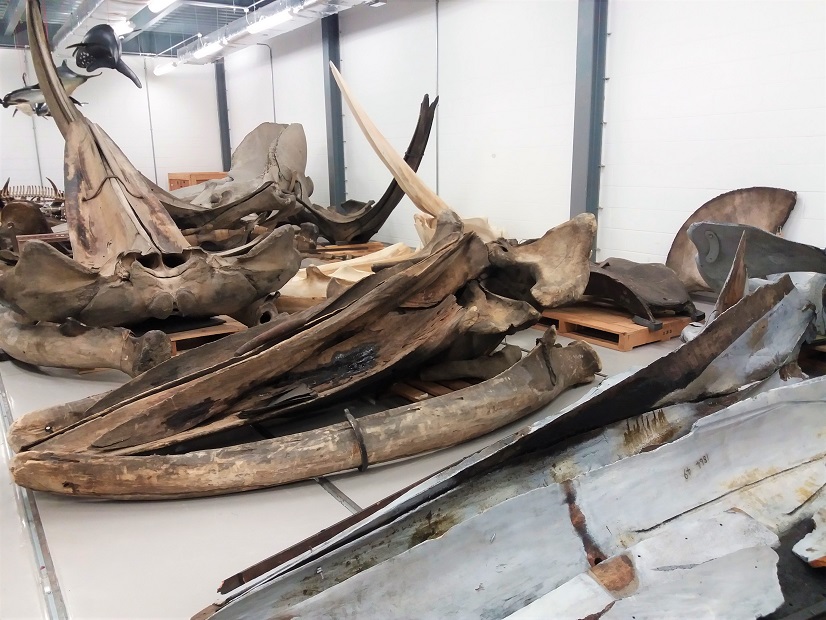 While a curator from the Natural Science department was not available on the day of our tour we heard some really interesting facts about some of the key items as well as some of the behind the scenes goings on such as how specimens are named and the processes by which modern day specimens are collected.

Rather than a curator our tour was largely taken by one of the museum’s Preventive Conservation staff, meaning someone who is responsible for ensuring item and artifacts remain in the best condition they can and don’t deteriorate. This was actually an amazing insight into museum working and provided us with a much greater understanding of the difficulties faced by museum collections worldwide through pest control – mainly keeping pesky moths and beetles from munching through fragile specimens, environmental controls and protective housings.

With all that in mind much of the Natural Sciences collection remains far out of reach but not out of sight as the National Museums Collection Centre upgrades its facilities to state-of-the art buildings which allow items to remain in protect atmospheres while big windows give visitors a glimpse into the amazing links to the past that they are protecting. 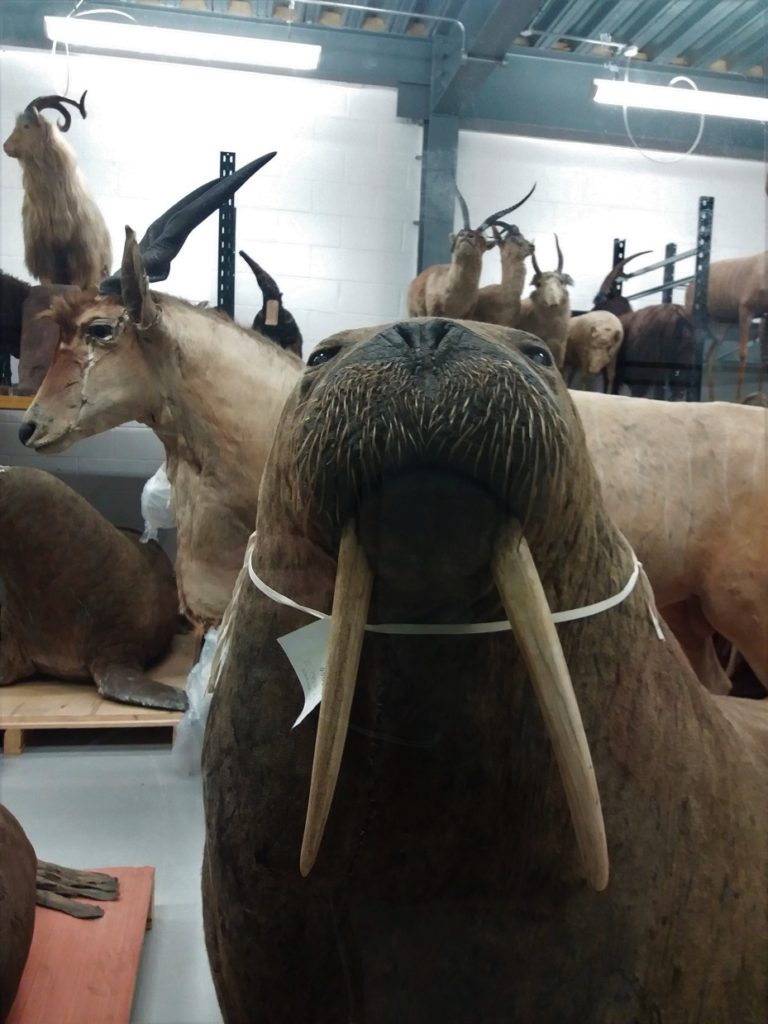 Need to know about the National Museums Collection Centre Tour

Tours of the National Museum Collection Centre only run once a month and are only able to take a limited number of visitors at any one time. It is a very popular activity and we actually booked our November tour back in August so that may give you an idea of how far in advance to consider your trip.

To join a tour you must book in advance and presently tours are running on a Thursday mornings.  At the time of my visit (Nov 2017) the tickets were priced at £6 for a adult and £5 for a concession which includes students but visiting the Collection Centre through the public tours is only open to those aged 14 and over so is not suitable for small children.

There are so many amazing things to see at the Collection Centre but it is worth noting that you are not guaranteed any particular exhibits or for your tour to include a particular curation department as each tour is based on staff availability but you will be shown items from a number of different areas.

If you are planning on taking photos during the tour remember to check with the tour leaders  before you snap as some items may be sensitive to flashes and some areas have added security due to the value of items stored there.

Overall, the National Museums Collection Centre is a great wee morning and a fantastic option if you have the time to book ahead.

Where would you love to see behind the scenes? 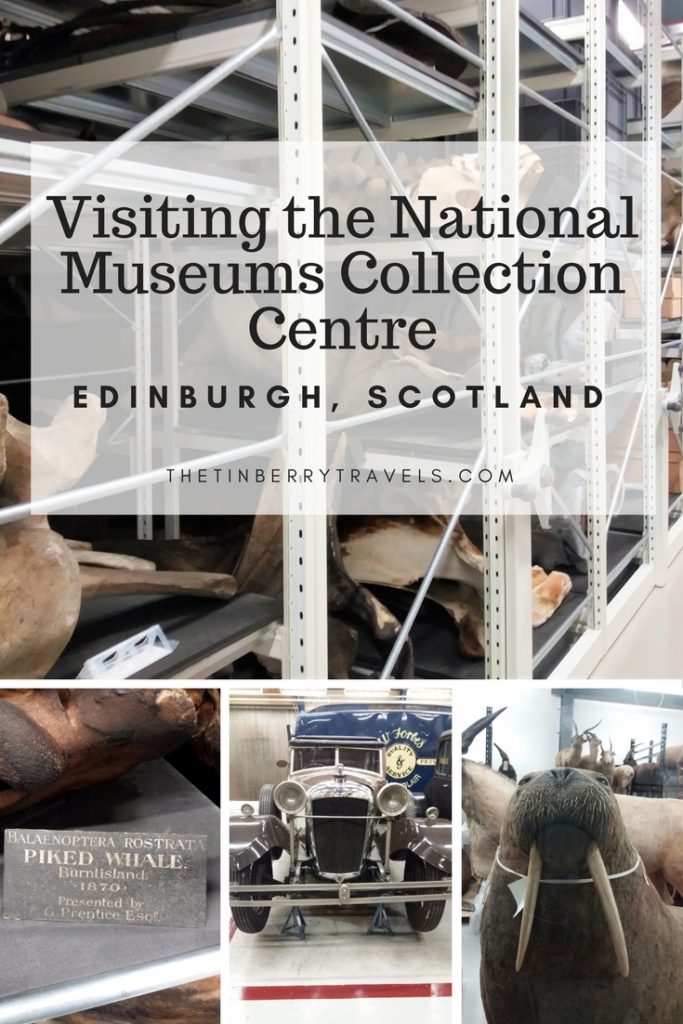