Kinneil House is located on the outskirts of the the town of Bo’ness and sits within the Kinneil Estate. A former home of the nobility and a number of royal family members, the building is treasure trove of history but the grounds also have a wealth of historical significance from Roman structures to connections to the industrial movement Here’s just some of the reasons you should make Kinneil House and Estate part of your next day out.

The house has long and exceptional history that I can only give a snippet of here but hopefully enough to entice you in. One of the homes of the Dukes of Hamilton the building dates back to the 15th and 16th centuries and is an impressive sight with long driveway in front. 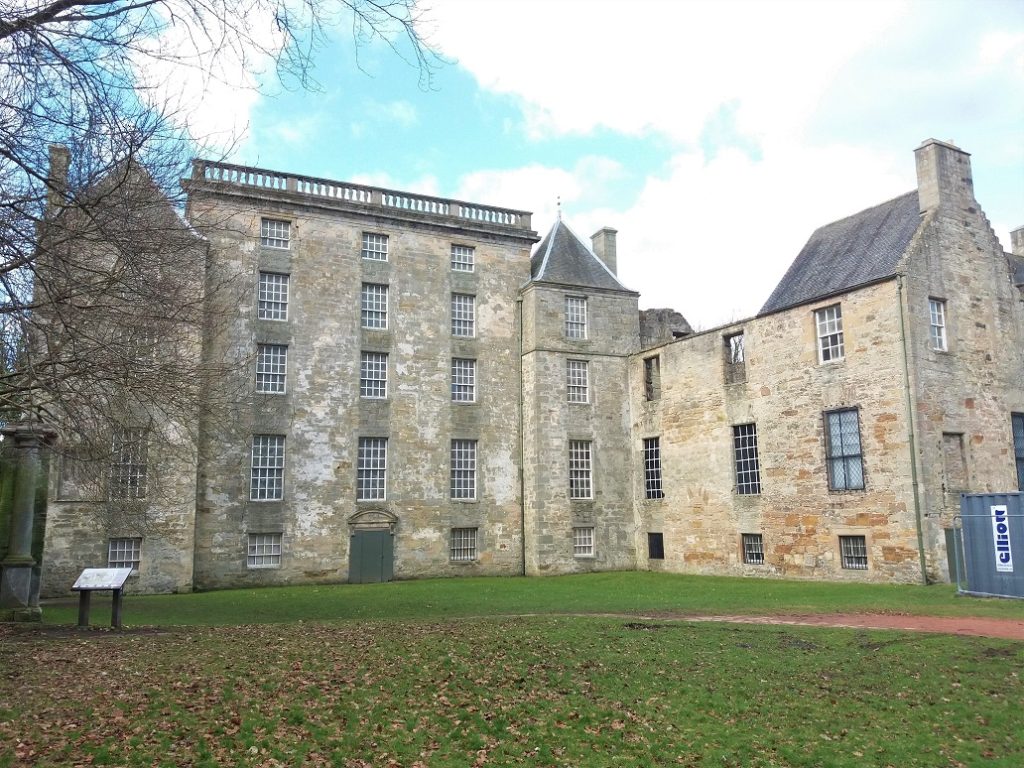 Most of the time you can only see the outside but make sure to look for Open Days run by the Friends of Kinneil House to get inside and explore some of the house. We timed our own visit for the first open day of the year and it proved a popular option with a fair few people keen to get a behind the scenes look at the interiors. However, there hasn’t always been such interest in this grand home. In some sections of Kinneil House you will only see the ruins of this historic building and just a shell remains in places due to its partial demolition in the 1930s when the local council had begun a plan to develop new housing on the site. But in other parts of the walk around you will see some of fantastic features which are the reason the historic home was saved from such a fate! 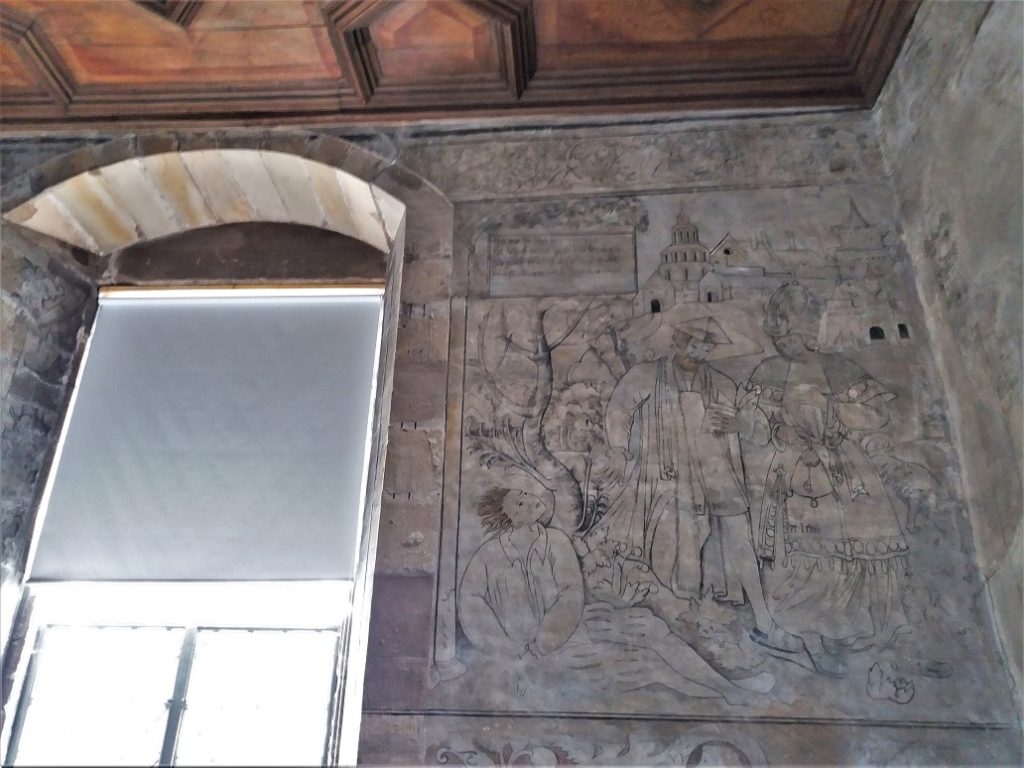 One of the key attractions of the site and the main reason the house was saved from demolition is the discovery of a selection of renaissance wall paintings within on section of the house. Luckily, in the process of the property being torn down, someone recognised the importance of the artwork and called in the experts. It turned out these were the best examples of such work in Scotland. Sadly, much of the house is still in ruin but our tour leaders were keen to tell us that their long term goal is to restore as much as possible.

While full revival is a long way away there are lots of original features, including stonework, on display in some sections of the house to give you an idea of the grandeur of the original home. 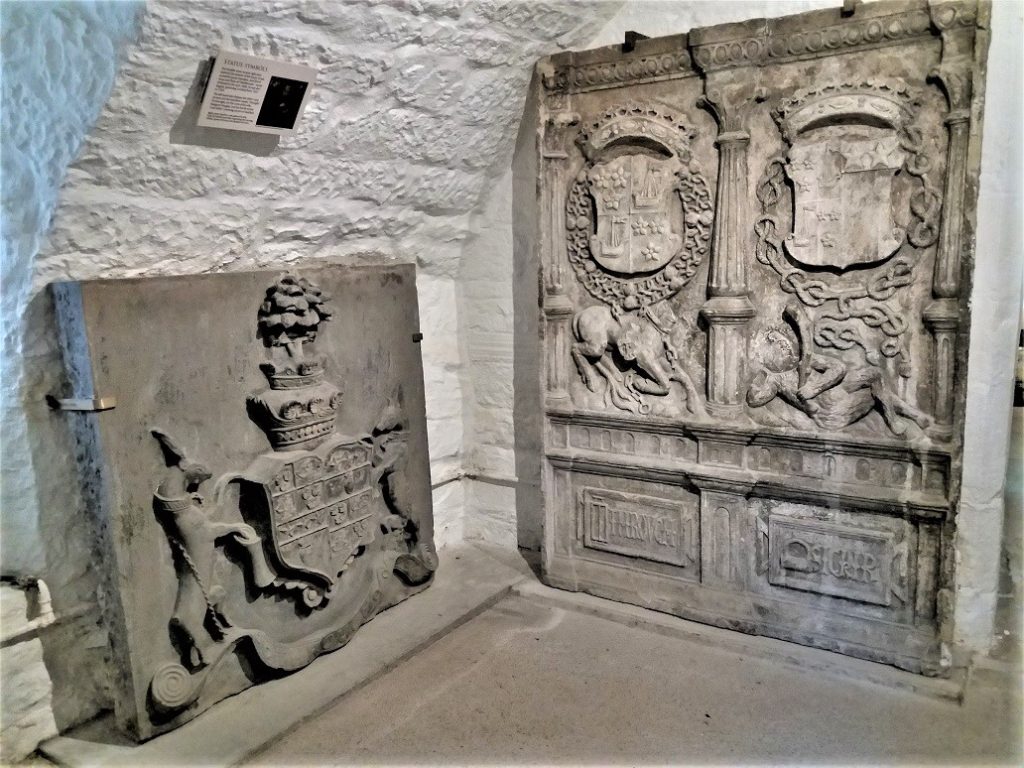 Much of what is on display was actually saved from builders’ skips and bonfires but many of the unique features such as fireplaces, wooden ceilings and wall mounting were long gone by the time the house’s demolition was halted. Thankfully there are detailed itineraries for historians and local groups to work from as they try to recreate what would have existed while the Duke of Hamilton’s family was in residence.

As is the case of many historic sites in Scotland, Kinneil House is said to be haunted. As the story goes, a white woman figure wanders the grounds and the house and is said to be Lady Alice Lilbourne who died falling from a window down into the deep ravine below. In terms of actual historic evidence, that is all that is known but local stories of the Kinneil House ghost tend to revolve around scorned lovers having a quarrel or that she jumped from the window in the hope of being caught by her lover below but missed.  I’m not sure whether I believe in the Kinneil House ghost but I was told that each Halloween you will definitely be able to see ghostly figure during the haunted house ghost story tours!

Other Attractions of Kinneil Estate

As well as the Kinneil House, the estate has plenty more to offer and is well worth a little time exploring with so much more history and natural spaces.

If you don’t manage along on an open day or you’re just looking for a little extra info on the house, there is lot more to see in the museum. A former stable block dating back to the 17th century, Kinneil House Museum is only a small building but packs a lot in with coverage of the local Roman and industrial history surrounding Bo’ness, the Kinneil Estate and some nature exhibits too. Over two floors there are lots of interactive displays, documentary videos and artefacts spanning the whole history of the area plus a very pretty building in itself. 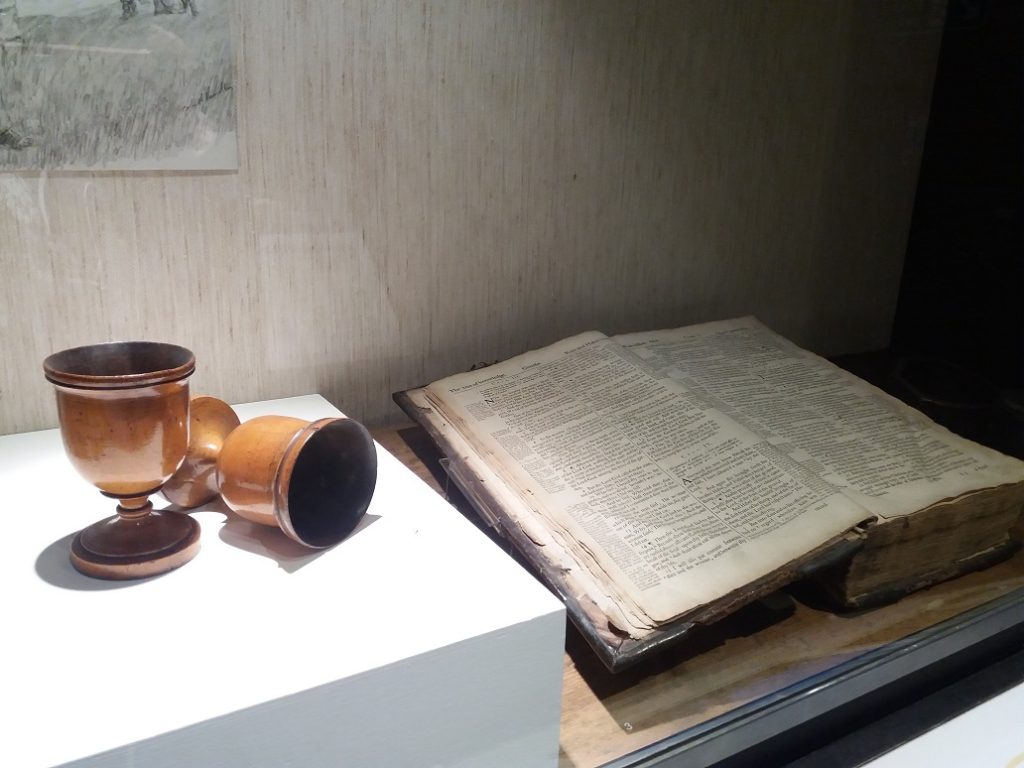 If you’re planning to visit the Kinneil House Museum, opening hours (as of March 2018) at 1230 – 1600 Monday through to Sunday but closed on Tuesdays. For the latest information on exhibits and opening hours do check the museum website.

Scotland is scattered with Roman history and Kinneil Estate has two exciting additions to this. Long before Kinneil House was even a thought, the site was part of a much bigger architectural marvel – The Antonine Wall.  One of Scotland’s biggest (literally) Roman artefacts is the Antonine Wall which runs right across Scotland and is classed as a UNESCO World Heritage Site. Sadly, it’s  difficult to see the spot where it once stood at Kinneil but archaeological digs as well as aerial imagery have helped experts see much clearer the line on where the wall continued. 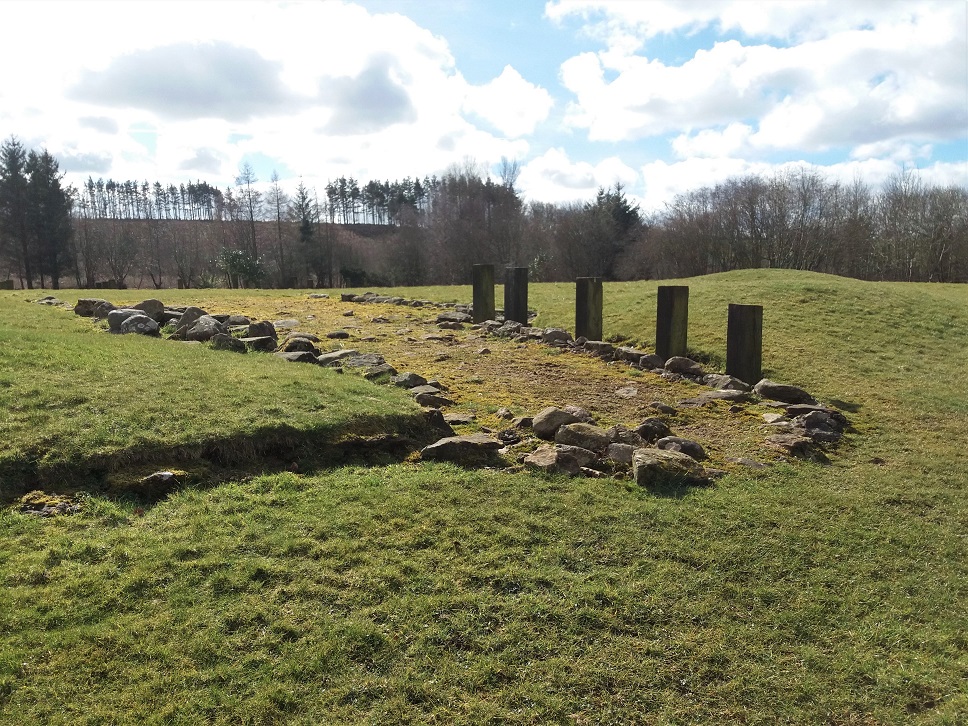 While the wall might not be visible, the Roman Fortlet on site is much clear even to the untrained eye. Original stonework marks out the site of the small structure which would have originally been connected to the Anontine Wall with some guide posts to give visitors an idea of the doorways as well. Rediscovered in 1978, the site continues to undergo the occasional excavation to find out a little more about the geography of the Roman infrastructure that once stood here as well as the lives of those that were stationed at the Fortlet. There are some good information boards on site for those that want to learn more about the Roman history on Kinneil Estate and the museum is certainly not to be missed if this is where your interests lie. 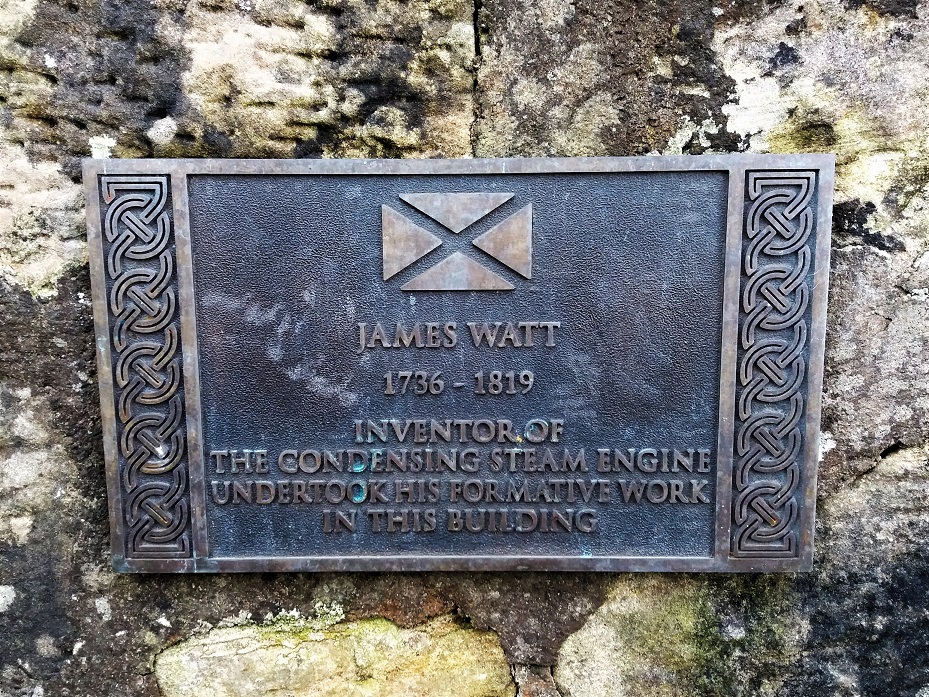 Noted with creating the separate condenser and perfecting the steam engine, James Watt is an important Scot in the industrial revolution and some of his work took place right here on the Kinneil Estate. Next to the main house lies a much more humble little structure which was once the workshop of the 20th century engineer.

Actually predating the Kinneil House, Kinneil Church lies just behind the main site but sadly only a shell of the 12th century chapel and the village community that once surrounded it still remains. Abandoned by the 17th century, the village of Kinneil and its church were left to ruin as it’s people were moved into Bo’ness by the Hamilton family. While it is only the gable end of the church building that remains standing, the wall outlines are still easily seen as are a number of gravestones on the site which are a peaceful place to wander. The church bell also survives and can be seen in the Kinneil House Museum.

While the grounds are not extensive, Kinneil Estate does offer some nice walking routes through a quiet wooded area and past two small ponds. While there wasn’t too much wildlife or any outstanding viewpoints, we actually spotted two buzzards hunting above us while walking along the Kinneil Wood paths so with some luck you might see some of the local bird life on your trip. It’s worth remembering that some areas of the Estate are former forestry grounds so do be careful and don’t wander into areas cordoned off. As well as the pathways there is also a large paddock area which seemed great for kids to run around in or maybe enjoy a picnic on a dry day. 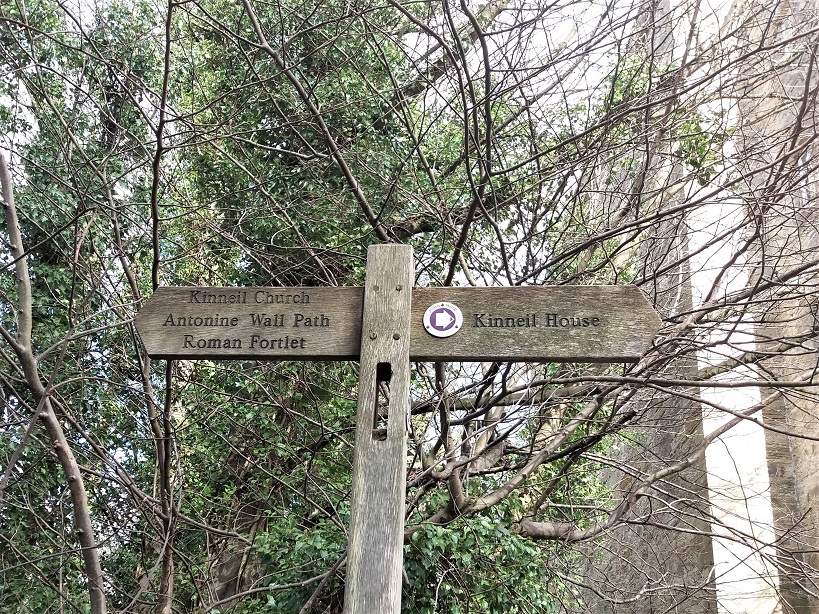 The site it also part of the John Muir Way long distance trail which stretches across Scotland from Helensburgh on the west coast to Dunbar on the east so Kinneil Estate can easily be worked into section six of the trail going from Linlithgow to South Queensferry.

Kinneil House and Estate is a great little find and so close to Edinburgh, Falkirk and Linlithgow, it’s easy to fit a trip here as part of a wider exploration of the area. Bo’ness itself is home to quite a few local attractions too so why not include a trip to the Bo’ness and Kinneil Railway or the historic Bo’ness Hippodrome into you visit too! 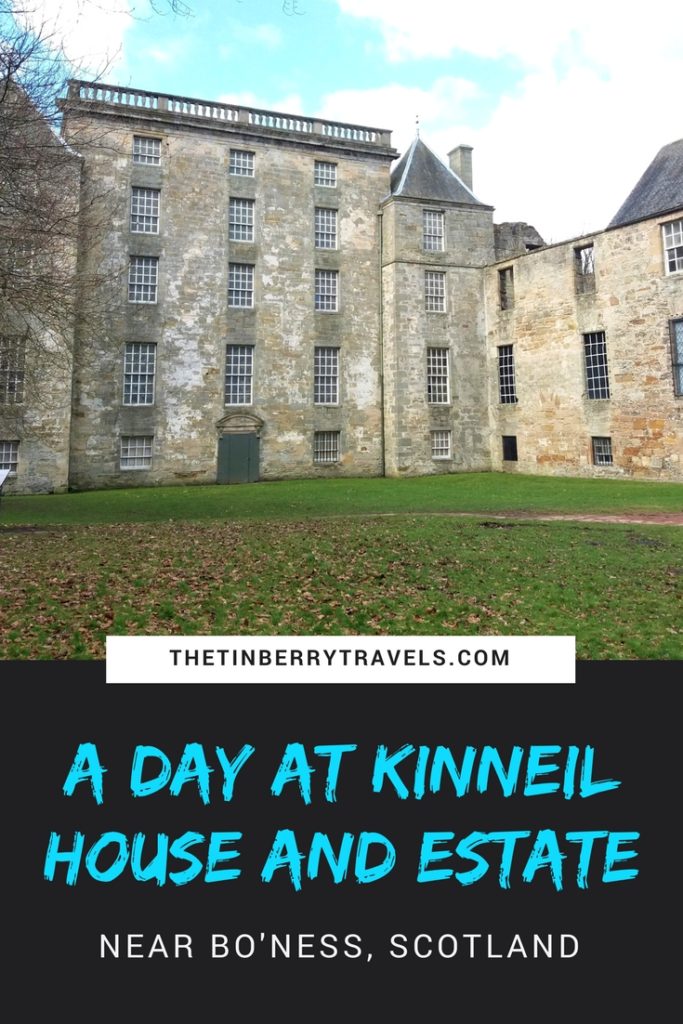