What makes the Blue Mountains blue? Well, plenty of rain it would seem! Katoomba is a spectacular hiking spot just a short train journey from Sydney and is a perfect base for exploring all that the Blue Mountains of New South Wales has to offer.

After the sunshine of my first few days in Sydney, my arrival in Katoomba was a bit of a contrast.  As the train journey continued the weather changed from the Sydney sunshine to much gloomier skies. Once in the Blue Mountain region we travelled though a rain storm but luckily it had passed by the time I got to Katoomba station…or so I thought. After walking only 5 minutes from the train a downpour came on so I copied locals and stopped under a shop canopy. Within seconds the rain was pounding down and I had to pick up my heavy rucksack, that I had stupidly thought I could sit down for a minute, as the street started to become a river. I very quickly had to find a step up to get away from the rising water as the rain turned to the biggest hailstones I have ever seen. After a minute or two it suddenly went off almost as instantly as it had begun and everyone went back to plodding about the shops. Even though it only lasted a few minutes it was a scary introduction to the Blue Mountains.

After the eventful weather of the morning I got myself settled in to my hostel and set out to explore the local area and make a plan of my hiking routes for the following day.

There is plenty to see without heading too deep into the hiking paths and so by the end of my first full day I had explored some of the shorter trails, stood at Echo Point and viewed the famous Three Sisters. I’ll be honest they were a little smaller than I was expecting but the surrounding views were fantastic just the same. With so much stunning scenery it seems odd that a small rocky outcrop is the must see attraction.

I was told to always check the weather forecast before going bushwalking – the outlook was cold with ‘extreme rain’. I prepared for this weather with long sleeves, a hoodie and an extra jumper since it might be cold in the valley. My source was quite wrong and it turned out blisteringly hot under the scorching sun and there was not a cloud in the sky! So the bush walk was a little warmer than planned and took a little longer as I had to stop to cool down rather a lot  but was still a good experience.  New rule of hiking? Layers!!! 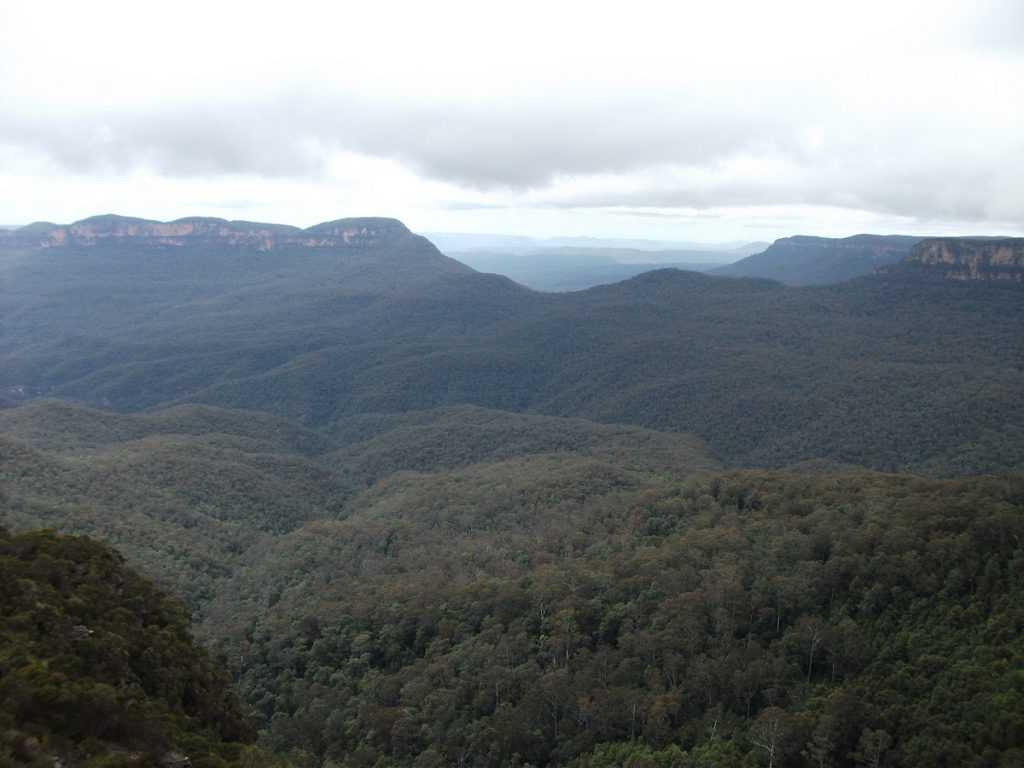 Even after my first day based in Katoomba, I managed to see some truly beautiful views and trees as far as the eye can see. So odd to think its only two hours from the metropolis of Sydney. The Blue Mountains is definitely somewhere you can really appreciate nature and certainly the power of nature as by the evening that predicted  extreme rain had arrived and with it some truly spectacular thunder and lightening! An amazing experience in itself.