Having already done a couple of days a few of us are sent out to a property up behind the little town of Silkwood. Blaze Aid made a bit of a foe pa by sending a conventional car instead of a 4WD since the car scraped all the way up the “driveway” which was a lovely sound.

The place itself was kinda crazy. Everywhere you look there’s stuff piled everywhere and cars slowly rusting way. The people themselves where lovely but I guess a bit prone to hoarding.

We spend the first day trying to sift through what was the son’s shed and workshop to see what’s salvageable and to find three motorbikes that became buried when the workshop collapsed. It’s was clearly a pretty chaotic workshop to start with and a level five cyclone ripping through it hasn’t helped. There is actually a metal girder which was concreted into the ground through the back wall of the shed just to show how powerful the winds actually were. The clean out process is slow since it’s very difficult to determine what’s junk and what’s not. This is clearly a guy who keeps everything and anything.

The place is filled with motors and various bits of machinery that is all rusted and never going to work but Kenneth, the son, insists that he can use it. To be fair he knows what everything is. Even if you pick up a manky bit of metal piping he’ll tell you the make, model, size, and year of the motorbike for which that is an exhaust pipe. As the morning progresses I become more and more wary of looking through things as the number of dangerous object I encounter increase including a spear-gun that hits me in the leg. Had it been working properly the spear in the loaded gun would have gone right through my leg. Oh and while were on guns I think personally I came across around 20 while going through the workshop so that made me feel so safe to be in the confined space. I’m sure none of them were loaded… hmmm. Later, Kenneth tells us he thought his dad’s Dynamite was in there but since we didn’t find it, it must have been put elsewhere. Having scraped up against so many rusty items I don’t think I’ve ever been so grateful of a tetanus shot.

The entire time we’re working the wife who is pushing 80 is in amongst everything lifting massive cabinets and pulling heavy motors around. Clearly a battle axe of an old woman. The men of the household can’t actually help us as both are in wheelchairs, so I guess she feels she must, much to our protest. The husband having gone in to get heart surgery at Cairns Hospital contracted Golden Staph. while in the hospital and ended up having to get both legs amputated to stop the spread of infection. The son, Kenneth, who is in his 50s had a motorbike accident and crushed a vertebrate and while in surgery at Tully Hospital to fix it a doctor nicked his spinal cord and put him in a wheelchair too. This is clearly one unlucky family but it also tells me not to go to North Queensland Hospitals as this is actually one of several stories I’ve heard and is later backed up by others at Blaze Aid with similar stories. So if I have an accident of some kind in North Queensland I will refuse treatment until flown home. Though whether Scottish hospitals are any better is up for debate.

After my long crazy day I’m glad to be back at camp where I feel a little more safe. After dinner myself, Roddy and René head to the top pub in Tully where there is a promise of free beer during the State of Origin match until the first try of the game. For those not up on Australia’s most important rugby match, this is a battle between Queensland and New South Wales and is the most important date on any Queenslander’s calendar. I’m not very keen on beer but I head along anyway and help the boys get some more free drinks and to support the maroons. It turns out even though the first try is with 10 minutes the free beer continues. The pub owner has a tab with a set amount and in the end the tab lasts the entire match so the boys are quite happy and quite drunk as well. So after the match we head to Tully’s nightclub. Yes, Tully actually has a night club, Rafters, and it was pretty busy with at least 7 people there and apparently it can get up to 12 in a night. I end up playing pool with some locals and showing just how bad I am but everyone gets a laugh out of it anyway. Roddy even manages to wangle some free drinks out of Rafters which means I become his translator as the strength of Oban accent is directly proportional to the level of alcohol consumed. We make it home so all it well.

Following day and after about 2hrs sleep we’re off back out to the same place. This time, to retrieve some of the roof from the bush and to sort out a second shed closer to the house which just happens to have a very large tree parked on it’s roof. The morning is spent trying to split lengths of corrugated iron into ute size pieces without having any tools. It proves a long and frustrating process and after lunch we start on the smaller shed and in true Kirstin style I do myself an injury by walking backwards into a metal pole sticking out the ground. So a nice colourful bruise takes pride of place on the back of my calf. 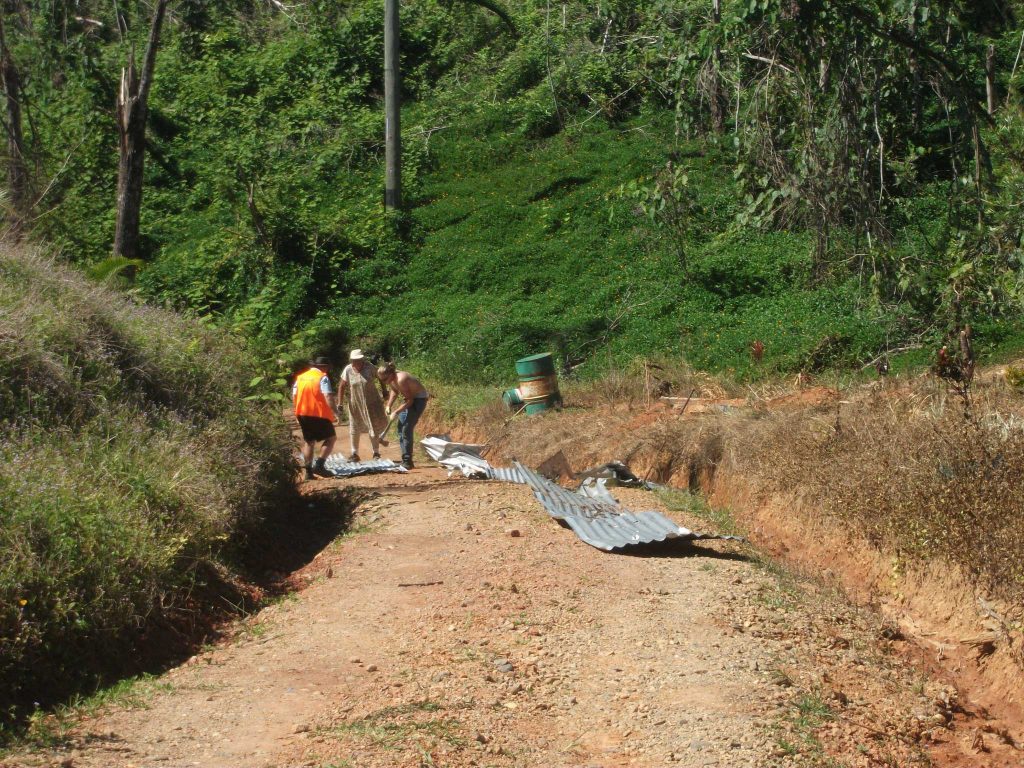 By Friday just about everyone is sent out to a big property not far from town and as the guys work the chainsaws the rest of us clear the debris they leave behind. I see my first cane rat as it darts past me and their not small things. This one was the size of a cat at least. And then Saturday a group of us do a job out at Mission Beach where there is very little to do and the Lady who owns it can’t really find us anything to do either which is a little odd since she’s the one who called us out. We do a bit of chainsawing and some branch clearing but generally myself and René end up just have a laugh at the other end of the massive paddock which I think is a caravan or camping site of some kind. The land itself is worth a fortune and hence so is the lady that owns it and she tells us she doesn’t even live there she lives up in Cairns. But were happy to help and end up getting taken out for a big pub lunch so its a nice day.

So it’s Saturday night and since fellow Scot, Paul is leaving we (the Scots trio) decide to hit the town though it’s all on Paul’s expense which myself and Roddy protest to but I’ll admit only to a certain point. We are joined by a new Blaze Aid volunteer from The Northern Territory who can’t understand half of what we say but is quite happy to tell us lots and lots of stories about himself.

After a long night of drinks we end up back a camp where our Australian friend calls it a night ( or more we call it a night for him before he bores us to sleep with his endless stories) and we hang out till around four before deciding to walk Paul home and end up crashing at his new makeshift home, the three of us curled up in a corner on the floor in what is basically a balcony space above an Engineering workshop where Paul now lives or more camps out. Two of them stay there rent free as they convert it into a living space and at the moment it not quite living standard. Well it gave me a good story even if an uncomfortable sleep.

Monday is a day off though there is nothing to do in Tully and Tuesday ends up being cancelled too after the place we go to sends us away.

Tuesday turns out quite fun though as two older couples who are caravanning together take me out to see Tully Gorge which is so spectacular and pretty. This is where loads of people come to do White water rafting but it’s just a really great view all the way along.

These guys are leaving the following day as well so the night turns into a bit of a party after they’ve all had quite a bit to drink which us younger ones find rather amusing. A massive sing-along takes place for probably about 2 hours or so in which myself and Roddy fend off many attempts to get us to sing them Scottish songs. Though Roddy does admit he would sing Caledonia after a drink or two. Shame we didn’t have any beer.

In the morning I get a good send off with lots of hugs and kisses and an address or too encase I pass through their neck of the woods at some point. And at 10 I head off on my next stage; a flat in Cairns and some more volunteering at Cairns Tropical Zoo.