So it’s Sydney, unofficial capital of Australia and with plenty of sight seeing to do we get to work. Having missed a few tourist things on my first visit to Sydney I’m quite happy to do the tourist route and see the sights. 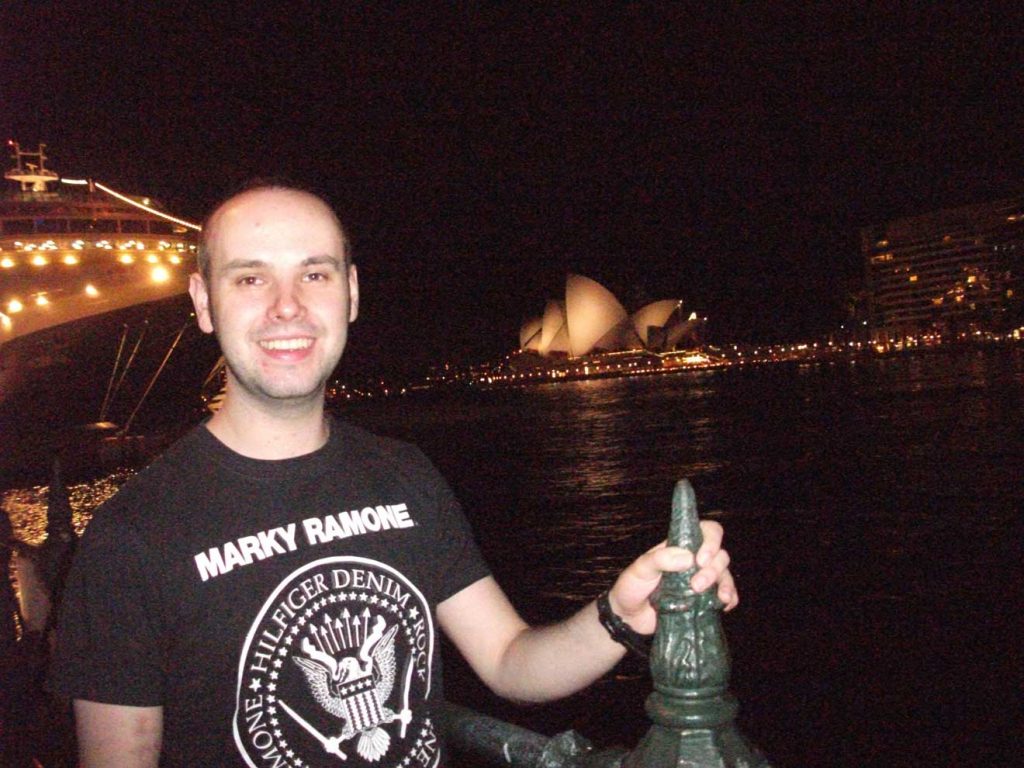 On our first night we wandered down to Circular Quay to see the Harbour Bridge and Opera House at night as well as some big cruise liners that were in harbour at the time.

I was eager to take Andrew to my favourite place in Sydney – the Aquarium so on our first full day we spent an afternoon down at Darling Harbour and headed to see all the fishes. Second time at the aquarium was just at fun as the first and Andrew seemed to enjoy himself too. Walking through tunnels are always fun and I had forgotten just how big the place was. 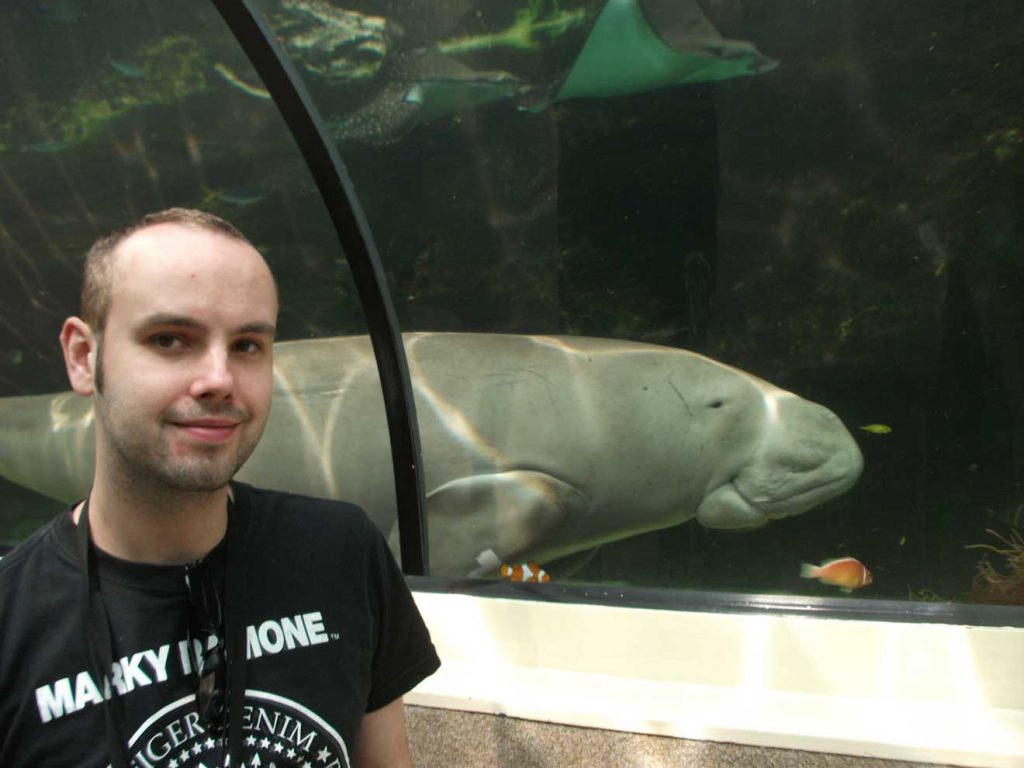 Wandering around the aquarium we took lots of photos mainly on Andrew’s camera which turned out to be quite unlucky in hindsight.  Our next day we headed to the Sydney Wildlife World which Andrew didn’t like so much because of the spiders and insects at the start, the snakes and giant lizards in the middle but most of all –  the scariest bit; the butterflies at the end. This amused me no end since I quite liked the lizards and definitely the walk through butterfly room but apparently Andrew doesn’t like things that fly at him. He did enjoy some bits of the Wildlife World and he got to see his first koala and kangaroo and all their other Aussie friends. In fact he seemed to be quite the animal charmer at the enclosures leading to a few amusing photos.

After leaving the Wildlife World we moved hostel from our nasty Maze hostel to 790 on George which was a much nicer and definitely cleaner though a bit pricier. 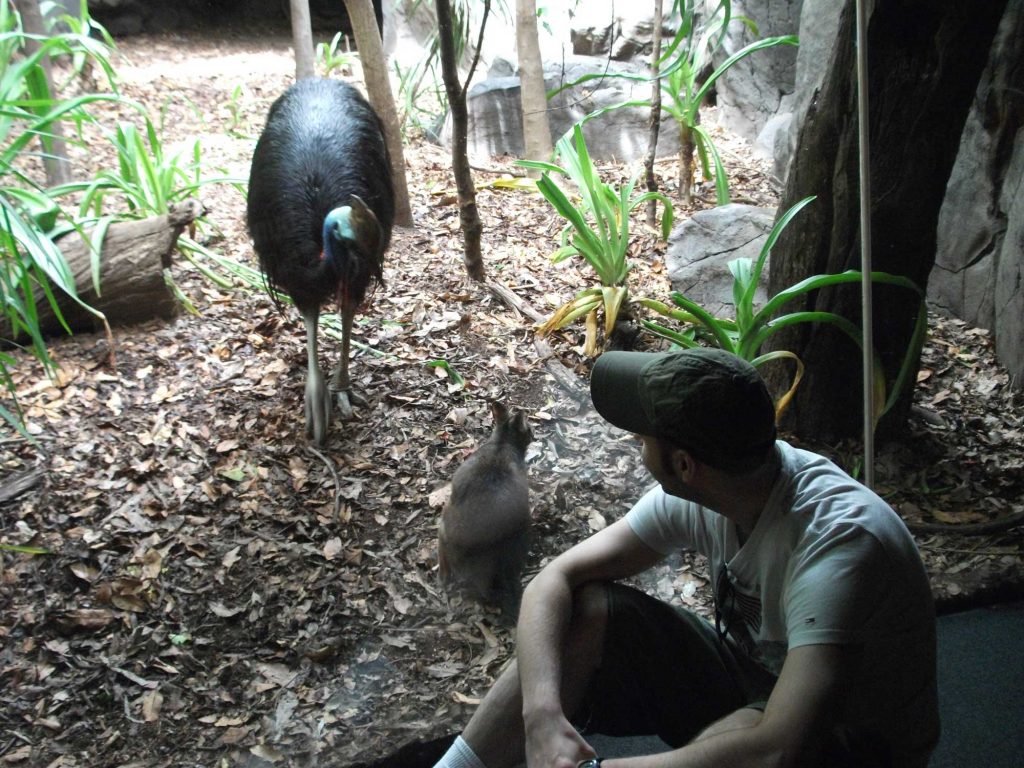 It was at some point on this day that Andrew’s camera card disappeared. The last time we had the camera with the card was on the way back from the aquarium where we took pictures of China town. After that the camera with card remained in Andrew’s day bag which went into day storage while we went to the wildlife place. We didn’t discover the missing card until the next day when Andrew tried to take some photos of the giant bats that roost in Hyde park only for his camera to tell him there was no card memory.

We spent the rest of the day and several of the following going over the events of the day before and the only explanation we could come up with was that someone had stolen the camera card while it was in storage. Only the card and not the camera itself or the laptop or iPod that was in the bag. We tried many ways to see if the card could have somehow fallen out the camera but it seemed impossible that the clip would unlock, the panel be opened up and then the card be knocked out (it’s in too tight to fall out) all without us noticing. It is really bizarre but I guess some opportunist backpacker who needed a camera card stole it, which sucks. The card itself, though expensive doesn’t mean anything but the photos on it were irreplaceable.

We were silly enough not to have backed anything up so we lost the pictures from Byron and our night in the airport as well. Andrew also lost photos of his work leaving night back home. So the moral is ALWAYS back up photos at the first opportunity. Luckily I had asked Andrew to bring my spare memory card when he headed out so at least we had something to replace the card if not the photos.

Sydney is turning out not to be our favourite city but there are plenty more things to see and do and maybe despite the night in the airport, the drunken homeless and the theft of our holiday snaps Sydney will turn out to be a nice place.

We plan out the rest of our week to include the zoo, the Sydney tower and a visit to Manly before heading to the Blue Mountains for a while.