Australia was our first big adventure together and there was a lot of things to learn about long term travel but sometimes it can be the simple things that can trip you up.

During my year in Australia my darling other half chose to come and visit me for six weeks. How do you show someone Australia in six weeks? Well, with lots of travelling. We made a vague plan to see all the cities and a stop at Uluru as well but it’s fair to say we had a few things to learn, here’s just three of our travel faux pas.

During our Melbourne section of our trip we were meeting up with family but had to do a fair bit of hanging around before they had a few day to catch up so we did lots of walks and local attractions. After a couple of days we felt we’d really seen all the big things and were starting to struggle a little with things in our budget and not too far from the centre.

Once we thought we had exhausted our exploring we got a little bored watching the frequent rain. Only thing is we really hadn’t explored all the major attractions in Melbourne! Who goes to Melbourne and forgets to go on the Neighbours tour!!!!! Only once we’d left and people asked ‘oh how was the tour of Ramsey Street?’ did we have a Doh! moment. We could have met Toady or even Karl Kennedy!

Lesson Learned? Research is key, wherether its local tourist office, some blog reading or just random chatting to fellow hostel goers on what there is to do. We didn’t expect to spend so long in Melbourne but we really should have looked up more things just in case.

There was a lot of travel to fit in, in our six weeks included some road-tripping as well. Thing is, time zones can be tricky especially over multiple states and they get confusing when they go in half hours too. For one stretch we rented a car from Melbourne, Victoria to Adelaide, South Australia which had the added complexity of Andrew’s first Australian city driving and having to navigate those right turn form the left lane only systems but we made it out of Melbourne to hit the Great Ocean Road.

We had the fun of the fruit checkpoints and other aggressive backpackers wanting a lift (in the opposite direction) and some miserable Autumn weather on the drive but somewhere along the highway en route to Adelaide we realised we had literally no idea of the day but going with Andrew’s trusty watch we were on the date of our car return but were more than a days drive away. How had we done this? We had effectively stolen a car! And we weren’t even in phone signal in order to call and talk to the rental company. I took us over an hour of slight panic to realise that actually with all the time zone changing we had been doing Andrew had simply changed the date on the watch by accident instead of just the hour.

Lesson Learned? Never be so unaware of what day it is that something so simple can completely throw you off and cause panic. When there is a lot of samey days or so many different things that it becomes a blur just remember to take notes and maybe tick off in a diary so you don’t end up so confused that you think you’ve stolen a car.

Once in Adelaide our plan was to head on up to Uluru. It’s the ultimate must see attraction of Australia and we had a vague idea of just sorting that once in South Australia. We’ll head to Adelaide and then jump on the iconic Ghan train to Alice Springs. Perfect. Em…no. You can’t just jump on the Ghan train – that needs a pre-booked ticket a fair bit in advance, not the day before as we attempted. Looking back, and immediately after realising our mistake, we had no idea why we assumed you would be able to book a ticket on such a popular route, that only travels once a week the day before.

Our mishap lead to us spending more than a week in Adelaide before flying to the Sunshine Coast to play on some rollercoasters as an alternative but it wasn’t quite the same adventure we were hoping for.

Lesson Learned? Sometimes a bit of pre-planning is really required. Knowing vaguely how to get somewhere is fine but knowing details is much better if you don’t want to end up disappointed. Booking in advance can also often get you a discount!

What mistakes did you make when you first went travelling? Did you learn not to repeat them? Do share in the comments. 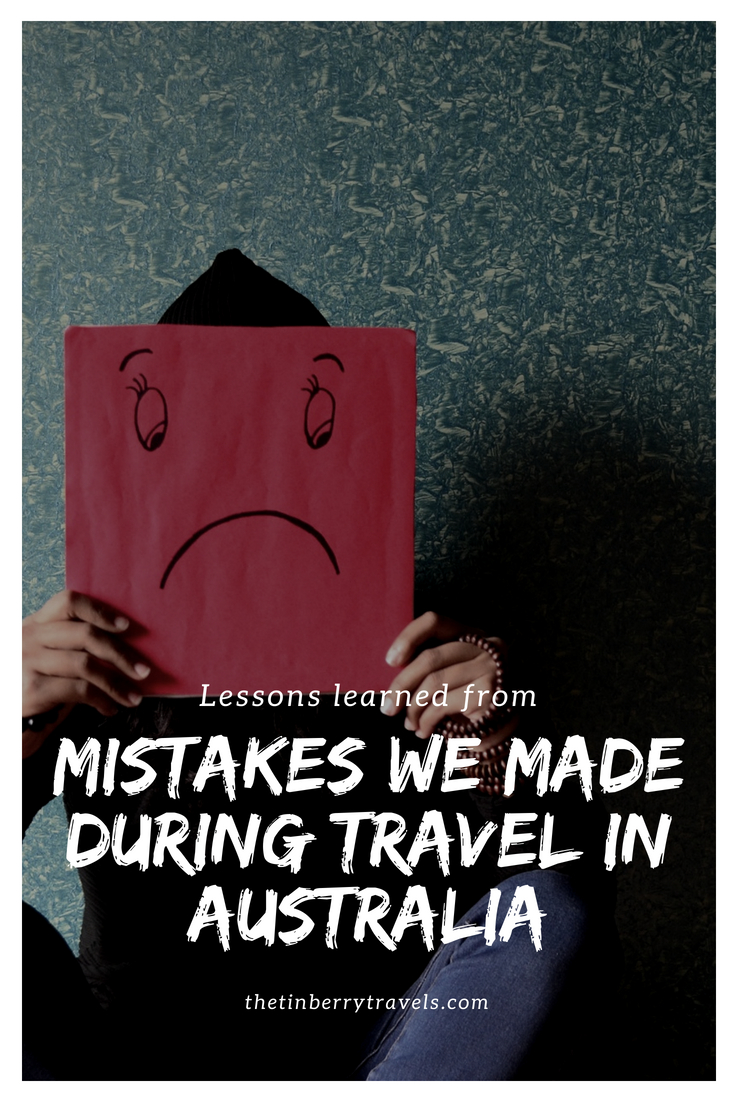