After the festivities of Christmas I decided to do a little more sight seeing in Brisbane since I had a little time off. Brisbane’s Modern Art Gallery was my first port of call on recommendation of a flat mate. The Art Gallery is in Brisbane’s South Bank area – which is oddly enough on the South side of the Brisbane River –  and is part of a large complex of buildings which make up the Brisbane Cultural Centre. The Modern Art Gallery was pretty cool with a lot of the exhibits being interactive including a city build entirely with Lego which you can add bits to though from the looks of it only the ornate and structurally sound ones are kept. Other fun exhibits included a Wall of Wishes where you can take a ribbon from the wall that has a wish you relate to and in it’s place leave your own that will become a wish for some one else later in the week. I choose a few including one which reads ” I wish every one in the world would be happy and own unicorns” and another ” I wish I had a turtle and there were no wars”. What can I say, they spoke to me. There was a cool swimming pool display where its only a few inches of water on a glass panel and you can look down at other visitors on a lower level and it looks like they are under water and those below can look up and see water people looking down at them. As always with modern art there were some weird things I didn’t get but I did find some pink polar bears that were very cute but they stand upon a platform of running water because they have no ice left which is sad. Once I had had enough of the Art Galleries, I headed to the Queensland Museum but it wasn’t particularly interesting. Not a lot there and to be honest tacky ornaments from the 50’s don’t really class as historical artifacts for me.

Other than the Cultural Centre, South Bank also has a big parklands complete with fake beach. I was a little cultured out after the Art Galleries and Museum so I returned on a different and much sunnier day to explore the parkland. Turns out its pretty nice around there and a nice walk but sadly being the first day of sunshine in a week and the middle of the school holidays the place was very crowded. I did get to see Brisbane’s fake beach even if I didn’t get to play on it.

After a day in the city my friend Beau who I had stayed with in Sydney arrived with Filip to spend New Years with us. Beau and Filip had been road tripping it up the east coast from Sydney and had decided to visit Brisbane before heading home and luckily had managed to match it with New Year.  After arriving late on the 30th Filip went to bed while I re-explained the differences between the terms English, British, UK and Scotland to Beau. I also decided to educate him on all things Scottish introducing the concept of Burns Night and therefore explaining who Robert Burns is, ceilidhs, haggis and believe it or not I had to explain what tartan was. I let him try some shortbread I had baked for them coming. In return I got some Florida history but thankfully Confederate History was skipped on this occasion. 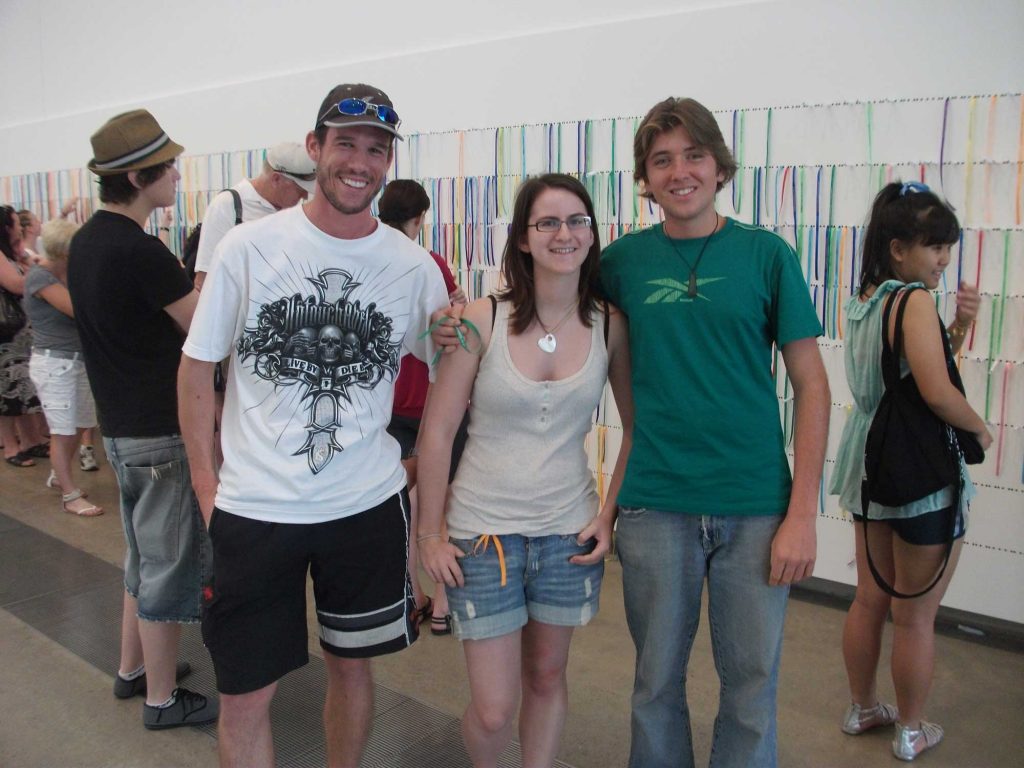 Next day I played tour guide for my two guests, returning to the Art Gallery again this time spending a lot longer at the Lego building exhibit where my structure fell so many times, I decided to make a smiley face instead.  Beau went for an outlandish design that was apparently a replica of some famous building which also ultimately failed and Filip managed to create a perfectly proportioned and very life like tram, not that we were jealous in anyway. Once bored of the Art Gallery we spent a little time in the sun before heading for lunch in the city. After lunch we made our way to the Botanic Gardens where we spent most of the afternoon before home to get ready for New Year Eve celebrations.

Myself and my flatmates got a nice surprise when Filip, who it turns out is a professional chef back home in Czech, decided to cook us all dinner. One very tasty meal later we were all in the mood for some fireworks and with some pre-night out drinks headed back to South Bank at half 11 for the midnight fireworks. Our bus actually drove right passed us as it was clearly full but a few minutes later an out of service bus with a very cheerful driver picked us up for free and drove us directly to the fireworks which was awesome. We managed to get a great spot for the fireworks despite arriving so late and it was definitely a good show. 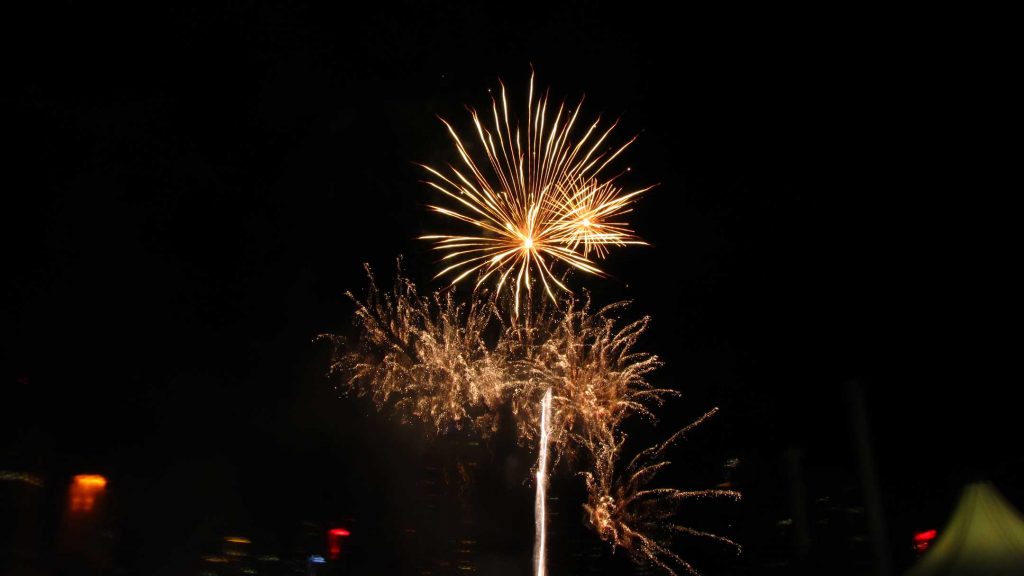 With fireworks over there is nothing left to do on New Years Eve but head out to a party. Unlike our other flatmates we were not willing to spend $200 on entry to a night club just because it was New Years and so we went to a cheap backpacker bar called Down Under Bar where we spend $10 on entry – bargain. I turned out a good night and a good laugh at the club and myself and Michiel even ended up on a dancing platform much to Michiel’s delight and my horror but a good laugh none the less. By 4 we were pretty tired and headed home.

New Years Day meant the end of Beau and Filip’s time in Brisbane and they left late in the morning in Betsie their rather scary 1985 Honda. My only experience in Betsie was when we headed to the shops and Filip forgot which side of the road to be on while turning a corner and scared the life out me steering into oncoming traffic.

After they left I was looking forward to a nice lazy day having been up so late the night before. However, Michiel had other plans for my day and come 12 o`clock he arrives in my room to announce he requires medical attention and would I accompany him to the hospital.  At first I think he has injured himself in some way and am rather confused by the lack of blood or bruising but turns out Michiel has severe sunburn from his trip to Frazer Island 2 days before and is now feeling woozy and lightheaded. Having already called the office hours medical help line ( I assume NHS24 Aussie equivalent) and been told to seek medical help, our only option is the Emergency room on the other side of town since all GPs are closed on New Years Day. Thankfully there are still buses running so at least we can get there. Once there we spend around 2 hours in the waiting room before Michiel is seen by a triage nurse and then another half hour before a doctor. Another hour with the doctor who disappears and returns periodically to take medical history, blood pressures and temperatures and who ultimately gives some Aussie sun advise and the offer of a drip to rehydrate Michiel and build up his salt and sugar levels and instructions to buy lots of pain killers. We finally return home 5 hours later but with a fun New Year story. It wasn’t a total loss – I got a laugh out of the fact that Michiel who is 6`6 doesn’t fit on a hospital bed and Michiel got some fun out of a new game I taught him – I Spy.

Since then I have done some more baking. Having been craving a macaroon bar for about a week and not finding any, my only solution is to make some. Today after some sales window shopping I spent the afternoon trying to make macaroons. Only problem is the recipe says 4 oz potato and 16 oz icing sugar or more until mixture is almost solid but still rollable. I ended up with about 23oz of sugar but seems to taste ok. Feel a little sick now having eaten quite a lot in the baking process. They got the thumbs up from Michiel as well so they must be good.

Today I also got the good news that I shall be volunteering for The Wilderness Society at the Brisbane Sunset Sounds Festival on Wednesday and Thursday this week. I help them raise money to protect vulnerable habitats on the Cape York Peninsula and in return I get to see a $200 a ticket concert for free.

And finally to make my day even awesomer, Andrew has actually bought his ticket to Australia. I shall not be spending my 21st alone and will have a travelling companion for over a month come February. They’re may be a little re-juggling of my travelling itinerary but with the severe floods further north it was going to have to happen anyway. It’s just not possible to travel north now and as much as I want to stick to my plan entering a National Disaster Zone is not on my must do list.